Seachem Coral Plugs ‘Lg’ are a new larger version of the Georgia-based company’s small hexagon shaped coral mounts. The original Seachem Coral Plugs are famously small and beloved by some coral farmers, particularly zoanthid growers because they can pack in a ton of individually mounted polyps on an eggcrate rack but the limited footprint was constraining for use with most other group of corals.

Enter the new larger Seachem Coral Plugs which still have the compressed hexagon shape but have been blessed with a larger x-shaped base which fits better into commonly used eggcrate but which will probably prevent them from being used in more decorative frag racks with holes pre-drilled into them. The new Seachem Coral Pugs Lg are described as being a full 42 by 22 millimeters or 1.6 by 0.8 inches in area.

Seachem describes their Lg Coral Plugs as containing calcium and magnesium to encourage coral ‘overgrowth’, better known as encrusting, and for sure you’ll get interesting results interlocking the plugs to create a flat surface and letting corals like Cyphastrea and Pavona just encrust the entire rack. We’re not sure if this new larger version of the Seachem Coral Plugs will replace the diminutive predecessor but you’ll soon be able to pick them up yourself in packs of twelve to see how they compare to classic coral plug shapes and sizes. [Seachem] 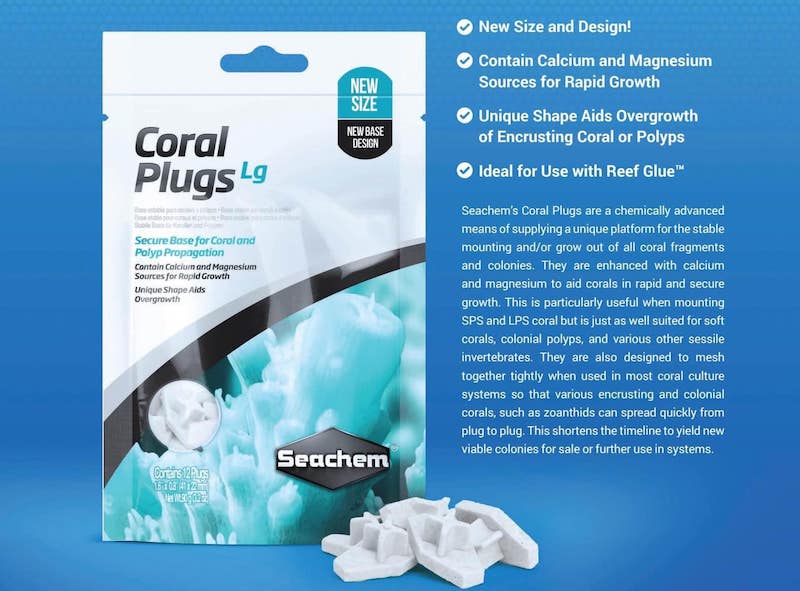 The ReefStock Raffle is a Mountain of Aquarium Gear