The OceanLigt T5 from AquaMedic is a sleek fixture which delivers a lot of power for a reasonable price. The German manufacturer which gave Americans their first taste of a stylish European light design is back with a new T5 fixture that follows in the footsteps of the legendary SpaceLight series. Although some of AquaMedic’s first attempts at making T5 strips in two and four bulb iterations had a somewhat wonky shape and components with a build quality that left something to be desired, the shape and finish of the new OceanLight T5 is a much more mature product. Whereas previous AquaMedic T5 lights were just cheap, the OceanLight T5 is now affordable and desirable. At just two inches thick with tapered sides and a matte finish with no features to distract the eye from it’s curves, the OceanLight can hang with the most posh of aquarium setups. Oddly enough, aside from it’s looks what is unique about the OceanLight is both it’s strength and it’s weakness: the spacing of the bulbs. You see the 8 bulb OceanLight is about as wide as most other 6 bulb lights and the 6 bulb OceanLight is aproaching the width of a 4 bulb T5 light. This feature allows you to pack in more power into a smaller area but it also decreases the efficiency of the reflectors; the reflectors on the OceanLight are about as narrow as any we have ever seen. Continue reading for some pricing and a pictorial walkthrough.

The OceanLight T5 comes in 4, 6 and 8 bulb versions. Thin fans can be found in the 6 and 8 bulb lights for active cooling and they all feature a row of narrow angle blue LEDs for night-time moonlighting. All versions have power cords for two separate banks of T5s and one cord for the moonlight and it can be had in any color you like as long as it’s black. Pricing for the various sizes w/ and w/o bulbs can be seen below. 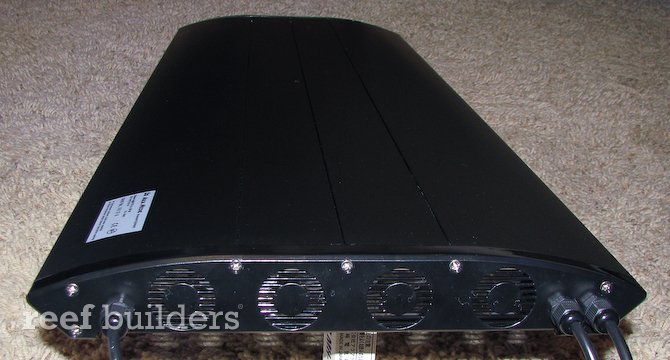 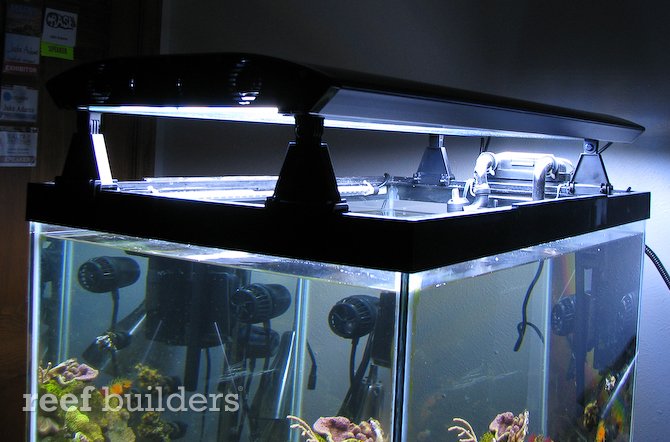 On-tank mounting is supported by tightly gripping legs which hinge on one side.