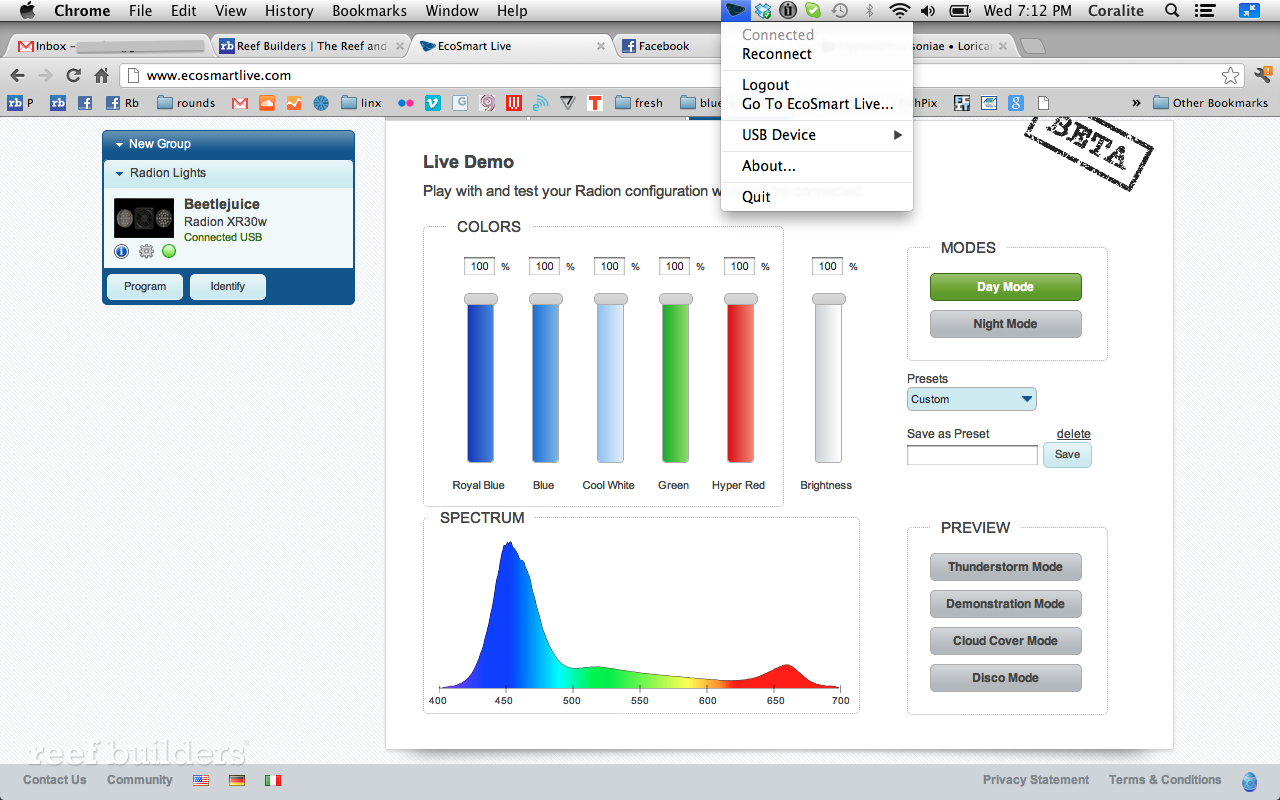 Back in May while covering InterZoo 2012 we shared the first look at Ecotech Marine’s newest control solution for the Radion LED called EcoSmart Live. After months of refinement Ecotech Marine is just beginning to open up the use of Ecosmart Live to a few users for Beta testing. As a cloud-based control platform for the Radion, EcoSmart Live allows users to access all controls of the LED light using any computer with a USB port and internet access.

All of the features of original Radion Configuration Utility are preserved in Ecosmart Live but now the functionality is open to all platforms and operating systems which makes us Mac users very happy. Although not intended to be permanently connected to a computer, while plugged in the Radion can be controlled by any internet browsing device to adjust lighting on the fly and to implement simple or complex programming features.

As you can imagine, we opted to program out our radion at a myriad of time points making for a really neat and gradual change of lighting sequence throughout the day. We personally love a nice long period of blue lighting for three to four hours for dawn to dusk, about four hours of white light during the middle of the day with the PAR-boosting red and green LEDs at full blast for a couple hours during the middle of that. Trying to program so many light time-points on ANY built-in controller would be a nightmare but it was pretty simple with the Ecosmart Live’s well optimized graphical user interface.

See also  Radion G6 Review - Should you Buy or Upgrade?

With Ecosmart Live being a cloud-based service, access for Macs and Linux is restricted to when you are connected to the internet, although the native Radion Configuration Utility still remains for Windows users working offline. The upside now is that no matter what computer or Radion LED the user is trying to program, logging into Ecosmart Live will mean that your favorite lighting programs are accessible, anytime, anywhere, particularly useful for aquarium maintenance companies who work on aquariums with multiple Radions  – or stores can also offer their favorite modes for different sized aquariums and different groups of light-loving reef animals.

Ecosmart Live is completely free and currently only available as a BETA form by invitation only but it won’t be long until it is opened up to the world. As an added bonus of playfulness we have discovered at least one easter egg in the program which opens up disco mode as well as a playful classic super Mario swimming across the screen when you live-play your Radion LED programming. Anyone else found it?