Mariusz Sun coral reef is one of those classic systems every serious reefer should know about. Mariusz sun coral reef is no longer in existence, and most of the photos are several years old, but reef is too worthy to be forgotten. Mariusz system was one of the reasons we got interested in azoox reefing, and at the time Mariusz reef was the example of just how great azoox aquariums could be.

Originally the reef was suppose to be mixed azoox, but because of their hardiness and easy of care (as you can imagine several years ago even azoox gorgonians were a massive challenge) sun corals and other azoox LPS slowly took over the system. The result was phenomenal, and the “sun coral look” has been replicated several times since then. There is just something about a field of sun corals that brings really good vibes to the overall look of the aquarium. 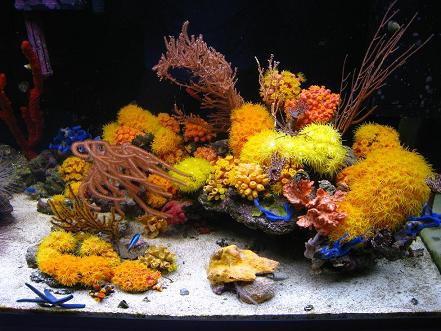 Mariusz Sun coral system is 145 gallons and utilizes a combination of four 80 watt Korallen Zucht Marine Light T5 tubes and two 80 watt Korallen Zucht Fiji Purple T5 tubes. Quite a bit of light for a system that doesn’t really need light (beside the photosynthetic sponges), but the color spectrum brings out great coloration of the corals. The yellows especially pop, but the blues are also nice and vivid. Filtration of Mariusz sun coral reef is massively oversized, but Mariusz does feed a massive amount of food. 40 cubes of frozen foods to be exact (30 cubes of brine and 10 cubes of mysis)! Yes forty, four-zero. Hundreds of reproducing Tubastraea, 9 Rhizotrochus and two dozen tube anemones require a lot of food. 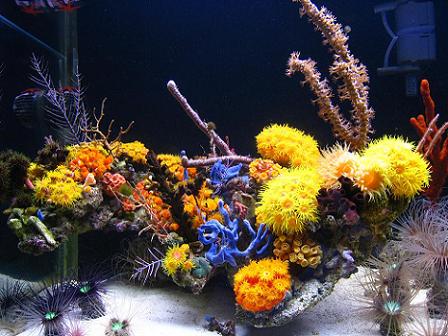 To combat a complete nutrient annihilation Mariusz uses a Deltec apf851 skimmer, which is rated for 400 gallons,  along with a Korallin NO3 Denitrator. The system is additionally dosed 6ml of Vodka a day (!) along with the occasional addition of  Korallen Zucht ZeoZyme to improve skimmer performance. 20 gallon water changes are furthermore done on a weekly basis. Definitely a lot of filtration for a medium sized aquarium.

The livestock in the sun coralreef is fortunately not nearly as intense as the filtration, but is equally well thought out. The main focus of the aquarium are the yellow sun coral polyps, which are beautiful and immediately capture your attention. Mariusz added a great touch however, he managed to bring out the yellows even more by adding blue supplemental pieces. If you look closely you will notice the many blue sponges strategically placed within the aquascape, and you might also notice the 10 blue Allens Damsels, and of course the blue tube anemones. The contrast between yellow and blue is a very simple trick, but it results in a very amazing look. It definitely highlights just what careful livestock selection can achieve.