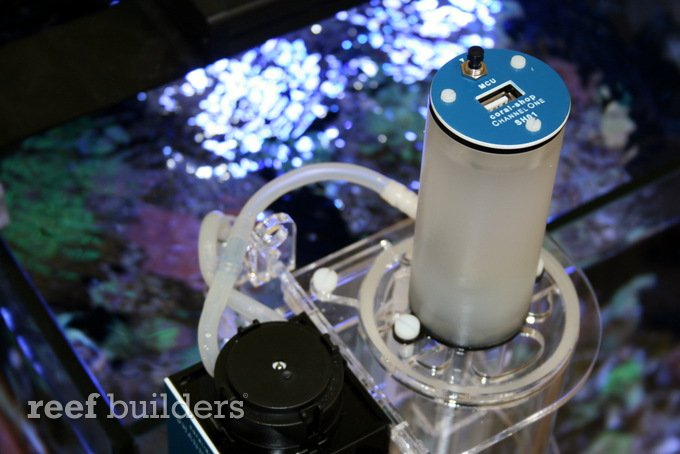 The Coral-Shop Channel One may very well be one of the most impressive pieces of equipment we’ve laid our eyes on in a long time. Build out of stunning acrylic and with so many features, handling the Coral-Shop channel one is like dealing with a sate of the art piece of laboratory equipment. Yes, it really it is that impressive. The Channel One as we discussed in the previous post is modular, and can be configured into any configuration that suits your needs.

For the purpose of our review we went with the autofeeding configuration as it packs the most impressive features and since it serves as a  great example just what the Channel One can do. If you instead want to dose chemicals however the Channel One is more than capable of doing that as well however. We’ve yet to install the Coral-Shop Channel One, and this is a hands on rather than a review, but if this thing works as it claimed, we may have a game changer on our hands.

We received the Channel One pre-assembled, but it consist of several different parts that all attach to the main body with plastic screws. Thus if something breaks, or if you want to lets say  change out a dosing pump for a higher flow model it can all be done with ease. The main body consist of the dosing container to which everything else is attached. A stirrer with pump fits right on the top, a dosing pump is attached to the side, and the chiller slides right onto the bottom. Additionally brackets that allow the Coral Shop Channel One to be mounted on either the side of your tank, or in a stand alone configuration with an acrylic base can be easily attached. It is modularity at it’s best.

The Channel One chiller is attached to the underside of the stirring/dosing chamber which contains a stainless steel base for better conductivity. The surface of chiller is in direct contact with the underside of stainless steel base of the reactor, but is mounted on the exterior. Thus heat from the reactor is effectively conducted into the chiller, without actually exposing the chiller to any water. As a result you can expect a much longer lifespan out of your chilling element, without any cooling compromise or wasted energy.

The dosing pump of the Coral Shop Channel One is controlled by the Channel One Controller which allows dosing amounts and dosing frequencies to be adjusted on a 24 hour basis, but more on that in a different post. The stirrer also plugs into the controller, although it appears the stirring cycles cannot be controlled. The chiller plugs directly into the wall. Like we mentioned before, we’ve yet to do some thorough testing with the Chanel One, so we cannot yet speak for it’s overall performance, but both on paper and in person this is one very impressive dosing configuration. Expect a full review of the Coral Shop Channel One soon.