Tinkeri x Burgess butterflyfish are popping up more and more

If you are a fan of Tinker’s butterflyfish but not too hot about the less colorful Burgess butterflyfish, increased imports of supposed hybrids of the two are becoming increasingly frequent. Roaps butterflyfish are unique looking and truly striking in the eyes of all fish nuts that seek something different. They usually require big bucks and were highly sought after and get becoming more popular around the globe.

The fish shown in the picture was said to be exported out from Hawaii without unknown original source. Marine World Aquarium in Bangkok imported it as a ‘Tinkeri Hybrid’ with a Burgess look and yes, with an extraordinary price. This specimen looks closely identical to the Burgess. However, there are thin yellow patch on the black blotch across the eye, not entirely black like most of the normal one.

Jack Randall wrote an article in Aqua Ichthyology Journal 2005 about new record of fishes from Marshall Islands with a picture of this ‘burgess-tinkeri’ hybrid there with a description of the unusal coloration Burgess Butterflyfish from the area. A friend of mine who keep his eyes on these fish also said that he saw a few of them varying in coloration and pattern ranging from half-half of the two to an extreme look from one side. So the population there should be mix-up. As many of the hybrid fish are still fertile, who knows, the next one being available in front of you might be the second generation hybrid. 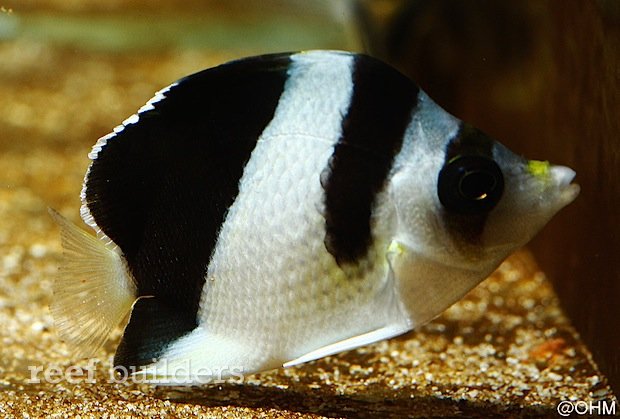