The marine betta is one of those classic marine aquarium fish that was once the bee’s knees, the pride of a fish keeper’s saltwater aquarium. With changing tastes and a whole new zoo of marine fish now available in the average fish store, the marine betta is not as popular as it once but Sustainable Aquatics is about to change all of that.

Thanks to an especially fecund pair of Calloplesiops altivelis, Sustainable Aquatics has succeeded in raising a commercial quantity of captive bred marine bettas which are small, cute, affordable, hardy and surte to reignite the aquarium hobby’s passion for this gorgeous fish. This week SA will begin shipping the baby bettas that they first revealed to the aquarium world about a month ago.

Riding that same wave of reproductive success at SA is the tail-wagging stippled clingfish, Gobiesox punctulatus. The small, greyish stippled clingfish may not be the most eye-catching fish in the menagerie of small aquarium fish but what it lacks in appearance it all but makes up for with really tantalizing behavior.

Falling just short of looking just like the marine equivalent of a bristle nose pleco or an otocinclus, the stippled clingfish’s tadpole shape and suckermouth sets it completely apart from typical aquarium fish fare. Sustainable Aquatics tells us that the stippled clingfish has the peculiar habit of wagging its tail when it is excited. We’re not talking about a casual tail wagging here, but an excited puppy-dog tail wagging that the clingfish exhibits whenever they are fed or interacting with each other – a behavior we can’t wait to see for ourselves. 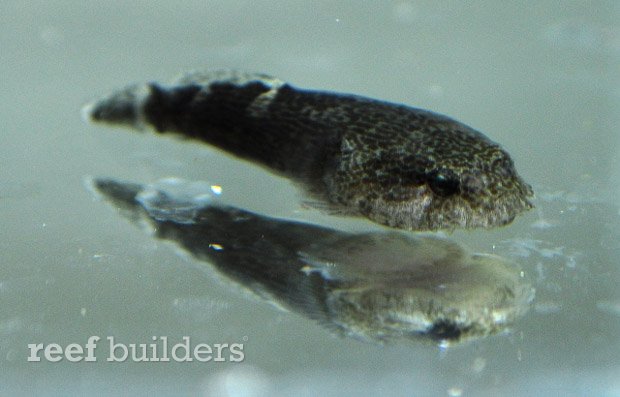