The Maze Angelfish like you’ve never seen it before

The title of this post is a little bit of a misnomer because in all likelihood, you’ve never seen any maze angelfish, let alone any that look like this. Hailing from Taiwan, for some reason the maze angelfish are almost never seen outside of Southeast Asia, and only once in the last few years can we recall seeing some being sold in the US by LiveAquaria of course.

Thankfully, our friend Zach Lin of Fishcube has shared with us this fantastic portfolio of the maze angelfish, represented by the three most common categories of this ‘syngameon‘ of the genus Chaetodontoplus. Part of the reason for our lack ok knowledge of maze angelfish is that for one, we have a hard time telling where one species ends and another begins. There are two nominal species of maze anglefish, Chaetodontoplus chrysocephalus, usually with a more yellow face, and Chaetodontoplus cephalareticulatus, usually with a lot more scribbly blue lines on the flanks. 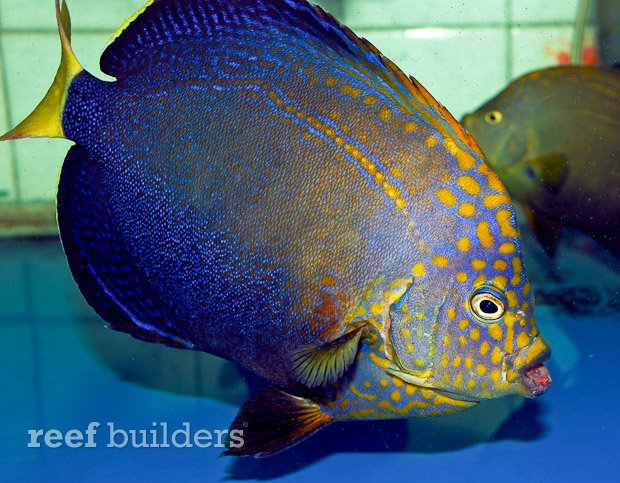 As the name implies, Chaetodontoplus chrysocephalus is distinguished by a face with a primarily yellow coloration, overlaid by blue lines, scribbles and spots that are concentrated towards the head, but usually fading to black or all blue flanks. The yellow-face maze angelfish is a little bit darker overall and although its appearance can vary quite a bit that bright yellow face and dark body is indicative of C. chrysocephalus, as pictured above.

Meanwhile, Chaetodontoplus cephalareticulatus also has the yellow face but the scribbled blue lines of the head remain one the body, sometimes breaking up into the metallic blue spots and flecks which are reminiscent of the much more common blue spot angelfish, Chaetodontoplus caeruleopunctatus. The specimens of maze angelfish that show the features of C. cephalareticulatus are normally more slender and hair smaller than their yellow face counterparts, as pictured below. 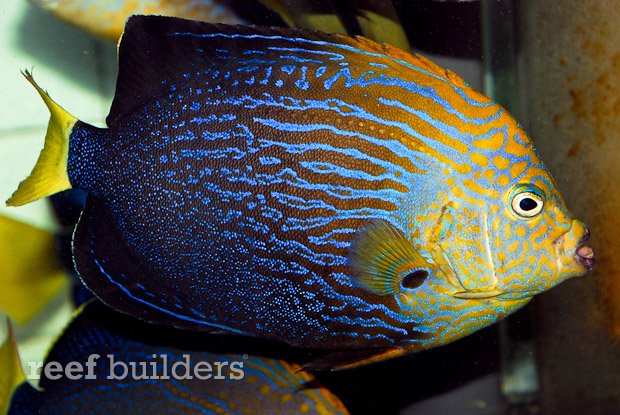 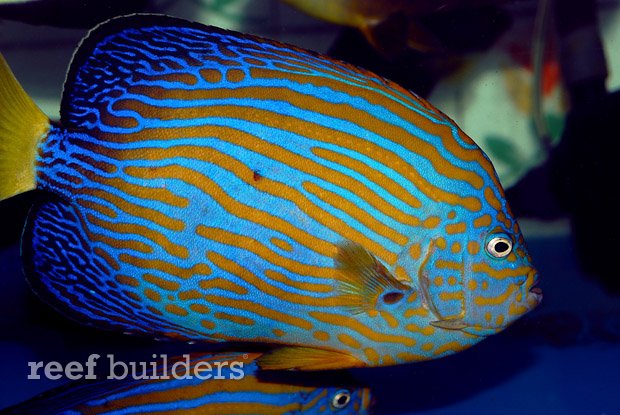 And finally, there’s another type of maze angelfish pictured above which looks most similar in color and pattern to the typical blueline angelfish, Chaetodontoplus septentrionalis.  This third form of the maze angelfish has an interesting density and reticulation of the blue lines but they are more solid in coloration, sometimes with circles of the base color and some branching between the lines. These are more aptly described as “super blue line” angelfish and they look more like the blueline angels that we see from Vietnam and they are all but devoid of yellow color in the face.

It’s unfortunate that most of our ornamental marine life collecting takes place all around Taiwan, but not the Formosa island proper. The lack of shipments from Taiwan makes the appearance and knowledge of the various maze angelfish a rare export indeed. However, with the captive breeding of blueline angelfish in Taiwan, perhaps future developments will allow for the scribbled and yellow face maze angelfish to be exported as captive bred juveniles, in which case we could be treated to one of the most beautifully colored and patterned marine angelfish in the sea.

See also  Corals to be grown on wind turbines in Taiwan

Reef Aquascaping, why hasn't the movement really caught on yet?