Reef Aquascaping, why hasn’t the movement really caught on yet?

Aquascaping, the art of creating asthetically pleasing underwater worlds is widely popular in the freshwater hobby, but it hasn’t exactly caught on within the saltwater industry. There are plenty of amazing, well thought out reef aquariums out there that put a priority on the overall aesthetics of the system rather than the “rarity”, or individual colorfulness of corals, but we just don’t have a palpable aesthetic movement yet. We’ve yet to see aquascaping subforums on popular message boards, let alone entire websites, magazines and books dedicated to reef aquascaping. So the question is how come?

Aquascaping is definitely gaining popularity, and a quick look at any forum reflects that, with users starting to care a great deal about liverock placement, but rocks are unfortunately really only half of the equation with coral placement actually playing a much more important role. This gap between the actual rock scaping and the act of coral placement and selection is largely where the problem lies.

Obviously, there are other barriers such as the fact that corals simply grow slower and less predictable than plants, not to mention that corals are less easily trimmed to maintain certain shapes than most plants, but a wide variety of successful aquascapes make it apparant that these are obstacles that can be overcome.

Every impressively aquascaped reef we’ve covered here on Reef Builders, whether it is Leonardo Den Breejen’s Formosa Forest (pictured above), Johnny Ciotti’s upside down reef (header image), Mariusz’ sun coral reef (below), or any of the others, all share one thing: well thought out coral scaping. The rock scape has in each case served only as a medium, with the corals taking on the task of paint, rather than the rocks as the main focus with the corals randomly thrown in as an afterthought which seems to be the case in the majority of current “aquascaped reefs”. The result of careful coral placement and selection? 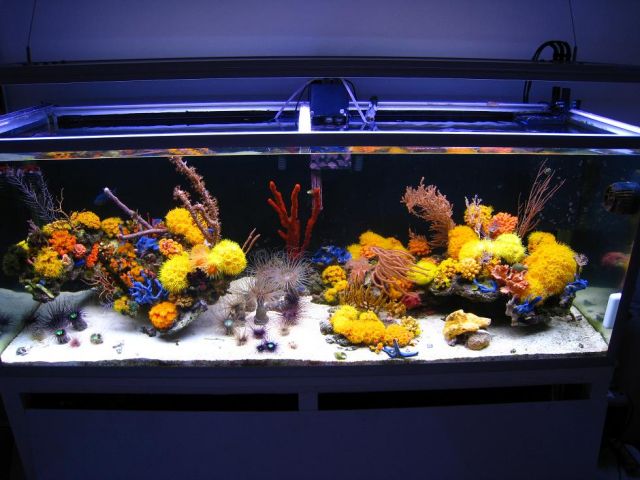 So how about we start to create more coral reef aquarium displays like the ones above? How about we start making more aquascapes that keep coral growth in mind?  How about starting to select fish and inverts that actually supplement the look we are trying to create in our systems. How about we start to prioritize the overall aesthetics of the system over individual livestock? Who knows, we just might create a part of the reef hobby that is actually worthy of being called an aquascaping movement

The Maze Angelfish like you've never seen it before