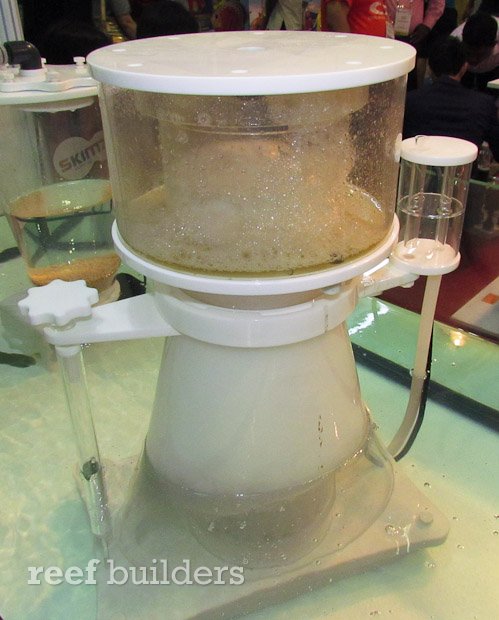 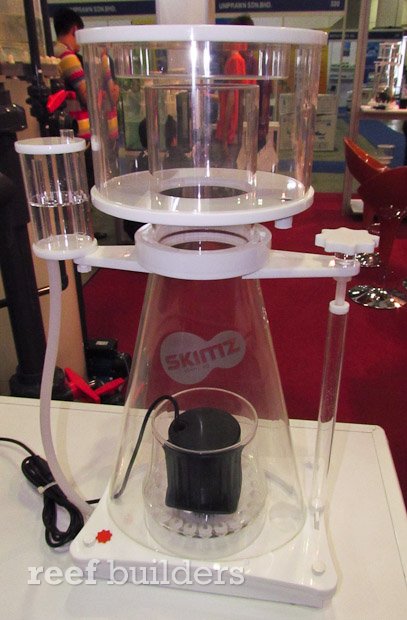 Regardless of Skimz’ intent, there’s no denying that the oval outline of the cone skimmer body greatly reduces its width in one dimension which makes better use of space in some under tank filter applications. We went hands-on with the Oval Cone protein skimmer at Aquarama in Singapore to see what this skimmer is like and big surprise, it’s still a protein skimmer when it’s all put together, albeit one with a shape that could satisfy better reef aquarium filtration ergonomics.

It’s actually quite amazing how much thinner the Skimz Oval Cone skimmer is than similarly designed skimmers with the same open volute and controllable DC pump. Functionally the oval shape of the cone body shouldn’t really skim any differently than one with a symmetrical cone body and the demo model at the Skimz booth produced as great of a cloud of air bubbles as we’d expect from any leading protein skimmer model.

Skimz plans to make the Oval Cone skimmer in three sizes, equipped with DC 3000, DC5000 and DC 10,000 respectively. The units being shown in Singapore were unsurprisingly prototypes but hopefully some importers will take orders of these “slim” style cone skimmers because that open volute design has got a big fotprint and there’s tons of sumps and filters that could use more controllable protein skimmer power in the space-saving footprint of the Skimz Oval Cone.