The Vertex Omega 150 cone protein skimmer is an exciting new design which is hiding a lot of cool tricks in plain sight. At first glance it appears to be yet another well-performing cone skimmer with a durable Sicce needle-wheel pump but since this is a Vertex product, it’s natural to expect more.

Unlike other Sicce powered skimmers, the Vertex Omega line is the first to modify the powerful pump with a custom made volute and needle wheel – a seemingly small change which leads to much improved performance. Additionally, whereas pretty much all other skimmers use a simple air restriction to adjust the ratio of air to water intake, the Vertex Omega is also endowed with the adjustable intake screw on the inlet of the needle wheel volute to gradually and very precisely tweak the air-water ratio in an elegant fashion.

In a rare change of the character for when we receive new reefing gear to test out, we totally skipped the whole hands-on process and went straight to the testing. Furthermore, rather than simply test the Omega 150 on its own, we opted to let it go head to head with a similarly sized protein skimmer which has been a top performer in our stable of needle wheel skimmers, the SWC 160 Cone Skimmer. 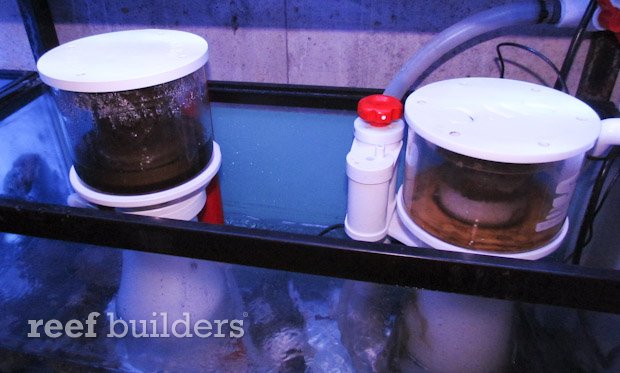 Let us just say right off the bat, that there is NO comparison between the materials, construction or craftsmanship between Omega 150 and the SWC 160. The Vertex Omega Cone is clearly made from higher grade materials that are put together with a fit and finish to make any discerning reef keeper proud.

What is comparable between the SWC and the Omega is the general size of the skimmers, which both models easily fill with a beautiful cloud of protein-removing foam. Also, while the SWC 160 Cone retails for about $275, the Omega 150 skimmer carries a $100 premium, and it is precisely this difference in pricing which we wanted to investigate – for $100 more the Omega 150 ought to school the lesser Chinese model in performance, noise level, and generally out compete it for the stripping of the proteins. 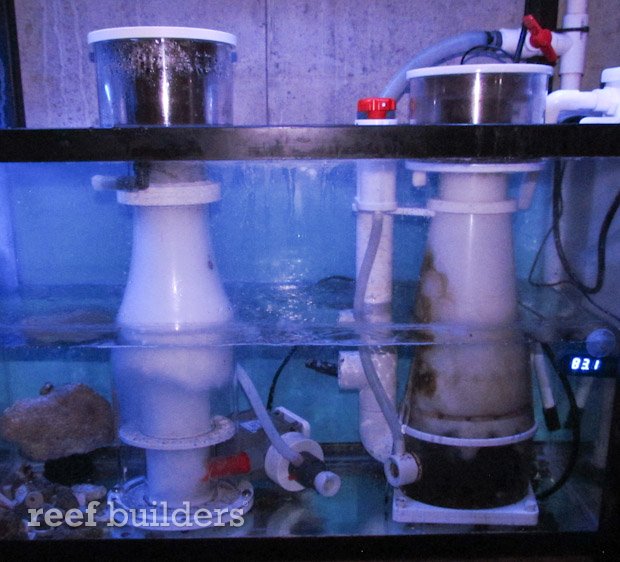 When we first installed the Vertex Omega 150, being unfamiliar with the novel air-water adjustment screw we found it a little bit difficult to control the copious amount of air being produced by the Sicce with custom needle wheel and volute. After getting familiar with the controls and tweaking the water level inside the skimmer, and the filter tank in which it resides, the Omega 150 was rocking a big fat cloud of foam with tiny bubbles at an appropriate height.

Surprisingly though, the Omega 150 didn’t break in and really start collecting skimmate for about a week. Whether this delayed fractionation was a function of the huge amount of air in the body or the fact that the 120 gallon system was already being served by a decent skimmer is hard to say. However, once the Omega 150 really got going it started collecting a nice “high quality” skimmate and as we expected, the SWC 160 started being outperformed and collecting only a dilute scummy water.

Below you can see a graphic example of the weekly production of both skimmers with the Omega 150 clearly removing the kind of scum that helps keep a marine tank clean. Mind you it is doing this while another protein skimmer is running in tandem with it and once the SWC 160 Cone was removed, the quantity of skimmate increased quite a bit.

It has been quite rewarding to test the Vertex Omega 150 cone skimmer in this head-to-head fashion. While it costs a little more than the vast number of cheaper molded Chinese skimmer models with no-name needle wheel pumps, the ease of use and increased performance of the Omega 150 is clearly a better value and we expect to be running this model for quite a long time.

What exactly is the Twinstar and how does it work?

JBJ Rimless 45 is a larger version of its rimless aquariums