The fourline hogfish, Bodianus trilineatus, is one of the totally under represented species of wrasses that although pictured in books, is virtually unknown. But the thing about “book fish” is, once you see a nice one in person the experience sticks with you, as was the case when I saw my first fourline hogfish at uShaka Aquarium in Durban South Africa.

As I walked up to this one display at uShaka Marine World, I was impressed by a great diversity of fish but one particular specimen really caught my eye. I’d seen and written about Bodianus paraleucosticticus a few times over the years but this guy I had never seen, it didn’t even ring a bell in my built-in fish glossary. 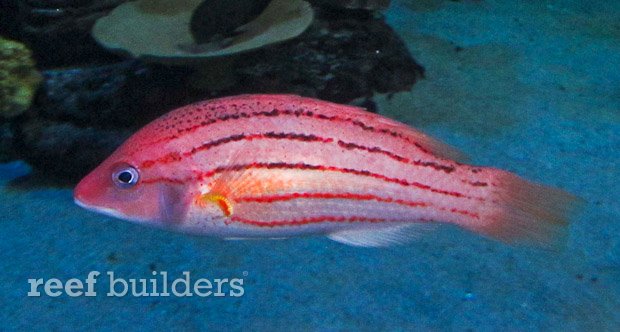 Bodianus trilineatus is rare not only because it only comes from the Western Indian Ocean around South Africa and Mozambique, but it doesn’t start to be sighted until about 35 meters (115ft) and is more likely to be seen at more than twice that depth. Appropriately enough the fourline hogfish spotted at uShaka in Durban was likely caught very close by in the waters around Durban.

The beautiful Bodianus trilineatus is a soft white color with two bright red lines, and three dark maroon lines punctuated by red dashes. As striking as this fish is, as it grows it develops a yellow streak along the flank which eventually spreads to take over the entire background coloration. Should the fourline hogfish ever make its way out of South Africa it would be an enviable aquarium fish indeed. 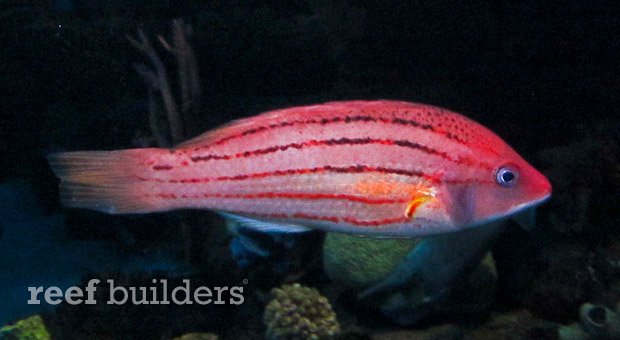