The Helix Skimmer from Orphek looks simple enough on the outside but is rumored to have a small but important trick hiding in its mixing chamber. Powered by a controllable white DC3000 pump, the Orphek Helix is a cone skimmer with a removable base plate for easier cleaning and access to the internals, and a specially designed diffuser plate which Orphek dubbed the ‘Vortex Generator’.

The Orphek Helix’s bubble plate has diffuser holes like any other, but in the center of which is another component which puts a strong spin on the air and water mixture, literally. With radially placed micro-outlets, the center of the diffuser plate produce jets of water which churn the air and water into a powerful yet non-turbulent spin to increase contact time up twice as long, according to Orphek.

The DC3000 is based on the same second generation of controllable DC pumps as the Wavelines, and will be compatible with future external controlling protocols for easier integration with aquarium controllers and Orphek’s own wireless protocols. We can’t wait to see whether the Orphek Helix skimmer is a real progression or just more of the same, but if the price is right, the DC pump and cone skimmer has proven itself to be a winning combination for many other recent DC skimmer designs. 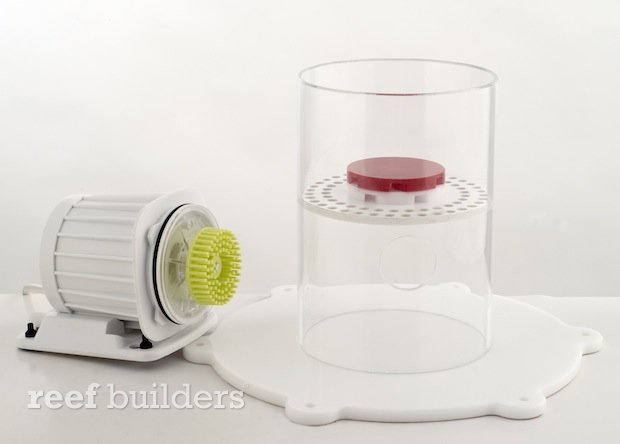 First hands-on and teardown of the Ecotech Marine Reeflink