Why Did My Pulse Corals Stop Pulsing?

Pulse corals (e.g., Xenia and Heteroxenia spp.) are among the more enigmatic sessile invertebrates. Many hobbyists and non-hobbyists alike find their rhythmic, hypnotic pulsing behavior fascinating and relaxing to observe, but precisely why they pulse the way they do has long been a source of befuddlement.

We know the pulsing isn’t related to prey capture because pulse corals are sustained via the symbiotic zooxanthellae residing in their tissues as well as the direct absorption of dissolved nutrients from the water, not by the oral ingestion of planktonic organisms. So what’s the purpose of pulsing continuously?

The intriguing results of a recent study conducted on Heteroxenia fuscescens by researchers at the Hebrew University of Jerusalem and the Technion-Israel Institute of Technology may finally shed light on the mystery. The study essentially found (and I’m grossly oversimplifying this, so I would advise reading more about the actual study in the April 2013 issue of PNAS) that the pulsing action creates an upward water flow that facilitates optimum gas exchange, thereby enhancing the rate of photosynthesis of the zooxanthellae, and more efficiently mixes the water and dissolved nutrients around the colony.

Whatever the definitive explanation for why pulse corals pulse, equally mysterious is why these corals sometimes slow or cease their pulsing action for no readily apparent reason—an occurrence very commonly observed in captive colonies.

What are hobbyists to make of this? Well, again, the jury is out on why pulse corals sometimes stop pulsing, but several possibilities have been conjectured. Among them:

The need for iodine supplementation 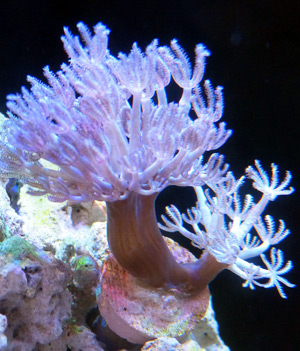 Over the years, various sources have suggested that regular iodine supplementation is necessary to keep pulse corals pulsing. That has not been my experience. The pulsing xenia colony I’ve had in my 75-gallon tank since around 2000 hasn’t received iodine supplementation in at least a decade and, as I mentioned in my recent “Corals Gone Wild” post, it has overgrown much of the back pane of the tank. It has also pulsed fairly predictably and vigorously for most of the time I’ve had it.

In his Book of Coral Propagation: Reef Gardening for Aquarists (Reading Trees Publications, 2007), Anthony Calfo relates that Xenia elongata pulse corals in his greenhouse would abruptly and predictably stop pulsing en masse whenever the pH fell below 8.3. I can’t speak to this from personal experience, but it’s certainly a possibility worth exploring.

Anecdotally speaking, I can attest to declining light levels as a possible cause. Over the many years I’ve kept these corals, I have noted that they tend to pulse more slowly and with diminished vigor under less-intense lighting schemes or under aging lamps that are overdue for replacement. Under newer metal halide lamps, on the other hand, their growth is positively explosive and they pulse with gusto.

Some hobbyists have noted a correlation between inadequate or overly intense water movement and the cessation of pulsing in xeniid corals. From my experience, these corals will thrive and pulse when provided low to moderate, non-laminar water flow. They won’t tolerate being blasted with a straight-line current, however.

Whether one of these factors, a combination thereof, or some other issue not mentioned here is the reason pulse corals sometimes stop pulsing, it’s important to note that the cessation of pulsing is not necessarily a sign of ill health in xeniid corals. As long as conditions are favorable, they’ll continue reproducing in your tank nonetheless. And, oftentimes, pulsing resumes at some point in the future—just as mysteriously as it stopped.