Whenever I’m asked to recommend a hardier, similarly sized, and equally attractive alternative to the green mandarinfish, the first species that usually pops into my mind is the sixline wrasse (Pseudocheilinus hexataenia). If you can acquire a healthy specimen, you’ll find this stunning—but somewhat feisty and mischievous—species virtually bulletproof and well worth the usually modest price tag.

This Indo-Pacific species has the typical wrasse shape (banana with fins) and reaches only about 3 inches in total length. Its overall color is bluish-purple to lavender, and, true to its common name, it sports a series of six bright-orange, horizontal stripes along its flanks. Its eyes are red with white horizontal stripes above and below the pupil. Its tail is green, and there’s an ocellus (eyespot) on the dorsal edge of the caudal peduncle (base of the tail).

In case my description didn’t do it justice, this species is quite psychedelically colored and patterned, in my opinion rivaling the mandarinfish in that regard. It looks rather like something that might have popped out of a Yellow Submarine movie poster. 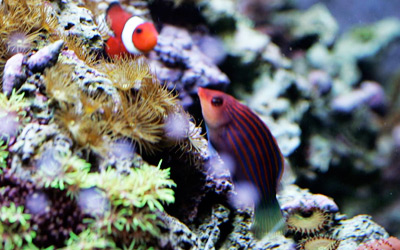 The sixline wrasse will spend most of its waking hours darting in and around the live rock in search of edible items, such as amphipods, worms, and other tiny invertebrates. At night, it will retreat into a hidden recess in the live rock and form a mucus cocoon over its body. If you look carefully in the morning, you may spot its discarded cocoon—looking like a small piece of cellophane—floating around in the water.

While generally quite peaceful, P. hexataenia can become aggressive toward other passive or similar-looking species, especially those introduced to the tank after it. Some specimens have even been known to get feisty with fish much larger than themselves.

Interestingly, you might see a specimen picking parasites from its piscine tankmates, as this little wrasse will also sometimes function as a cleaner.

Being remarkably fast, slinky, and maneuverable, P. hexataenia usually takes moderate aggression from tankmates in stride. The specimen in my 125-gallon sometimes draws the ire of the resident tomato clownfish, which is considerably bigger and bulkier. But whenever the clownfish is aggravated into giving chase, it only succeeds in bungling the affair, as the dextrous little wrasse can escape effortlessly. Not to wax anthropomorphic, but I swear the wrasse sometimes taunts the clownfish into giving chase just for the perverse pleasure of seeing it make a fool of itself.

If you acquire a healthy specimen that’s eating heartily to begin with, feeding P. hexataenia will present no challenge. Foods need to be fairly small to fit into this species’ mouth, but mysid shrimp and just about any other finely chopped meaty foods will be accepted with gusto, as will flakes and small pellets (mine goes nuts for New Life Spectrum 1mm sinking pellets).

Being a rather diminutive fish, P. hexataenia can be kept in tanks as small as 30 gallons, though owing to its highly energetic nature and constant foraging behavior, a larger setup with lots of productive live rock is best. Also, all wrasses are good jumpers, so a tank cover is a must, especially while a new specimen is getting settled in.

Carnivorous fish large enough to swallow P. hexataenia (assuming they can catch it) should be excluded as tankmates. The best choices are moderately aggressive, medium-sized to larger species, such as tangs, other wrasses (though keeping conspecifics and similar-sized species is a gamble), angelfishes, rabbitfishes, community-friendly triggerfishes, etc.

As far as reef compatibility is concerned, P. hexataenia is an exceptional candidate. It won’t harm sessile invertebrates in any manner, and only very small motile invertebrates are in any danger of predation.