Have We Reached Peak Bounce Mushroom?

We’ve written many articles in the past on Bounce Mushrooms and all the craziness surrounding them in the last few years. However, based on what was seen at ReefAPalooza New York 2016, it is very clear that Bounce Mushrooms are still the king of current coral vending.

In fact, as the trend keeps growing, Bounce Shrooms have become a symbol, instead of a product. The trend has been putting coral vendors into a frenzy searching for new crazy colored bounces like these from White Rabbit Corals and the Reef Shoppe.

It seems having a bounce mushroom has become the standard for a good reef aquarium show tank. Coral vendors are clearly using bounce mushrooms to leverage a degree of status rather than to actually make money at these shows. When I truly asked, most vendors with these prized mushrooms had to think for a more than a few moments before coming up with an outrageous price or admitting they weren’t for sale.

When a coral vendor gives an unreasonable price for a Bounce Shroom it really means they want to keep it, so it appeared that the amount of bounce mushrooms actually willing to be sold was, very different than the amount displayed at ReefAPalooza. Now don’t get me wrong, Bounce mushrooms are still being sold. Unique Corals presented this extremely bubbly golden bounce at the show which apparently sold for upwards of six thousand dollars.

I don’t think we will move our focus onto another group of corals until we can understand how bounces are made. They mysteriously appeared in the last few years, and without true knowledge of their creation or development, they warrant their expensive price tags. The sooner we can make them on demand, the sooner we can start growing more, lower the prices, and look out for the next big thing regarding live corals.

Here is a video of all the Bounce Shrooms at ReefAPalooza 2016. 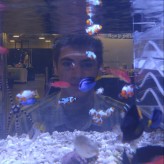 CoralFish12g on YouTube Trying to inspire the reef aquarium hobby one tank at a time.

Octospot is about to become your new favorite underwater camera