Kung Pao Monti is the Ultimate Strain of Montipora palawanensis

Montipora palawanensis is a species of Monti that has been in our reef tanks for quite some time. However in recent years we’ve seen a huge uptick in the number of strains of this coral, especially coming out of Indonesia.

Of all the SPS corals, Montipora is the only genus that can compare to the diversity of forms, shapes, textures and colors of Acropora. Lately, the species which has really been competing for the spotlight from Acros is Montipora palawanensis and this is perfectly illustrated in the incredible Kung Pao Monti. 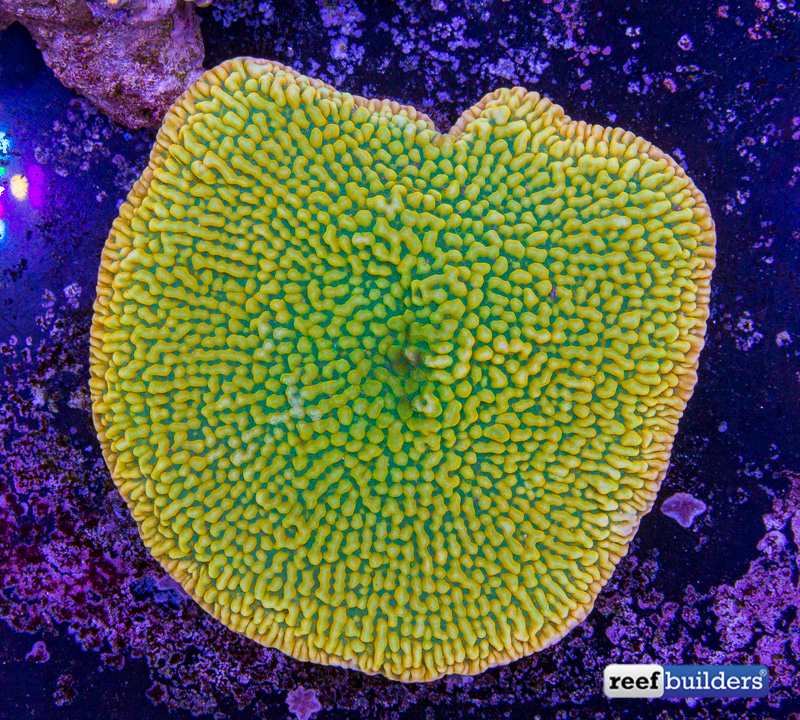 The Kung Pao Monti came from Bali Aquarium and eventually made its way to World Wide Corals. At first glance this strain of Montipora palawanensis appears to be shimmering gold in color, but a closer look reveals a fusion of many different colors.

Although rare to begin with, M. palawanensis is often found in shades of red or orange, and to a lesser degree in green, often with brightly contrasting blue, green or red-orange polyps. But the Kung Pao Monti doesn’t fit this mold, instead it seems to display a spectrum of colors – it appears golden in color from afar but up close you can see that the gold appearance comes from a weird combination of green and orange. 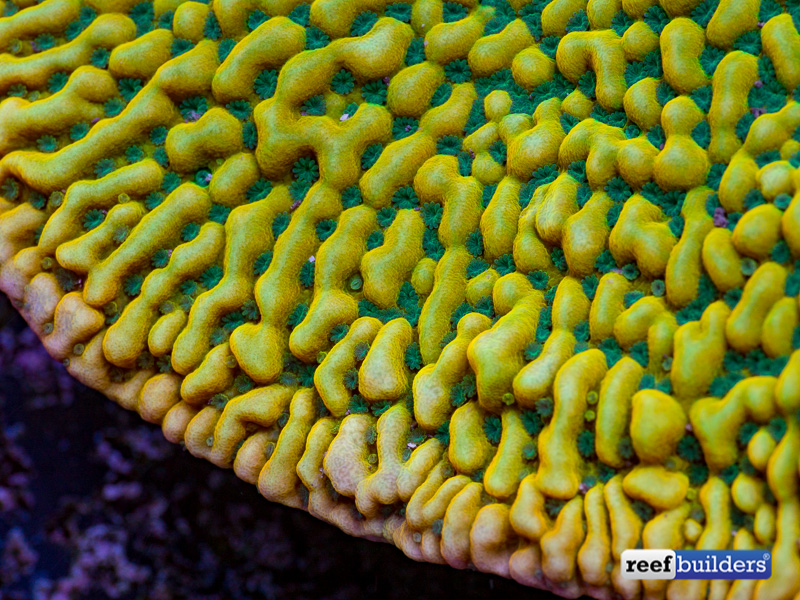 The edges of the Kung Pao Monti do start out mostly orange but then it develops more green color. New and small budding polyps start out neon yellow and then they also turn to green, but a deeper green than the colony itself. It’s almost as if, the Kung Pao Monti is naturally an orange Montipora palawanensis that has an overlay of green pigment, as if it is already ‘infected’ with Green Fluorescent Protein.

We’ve seen this phenomenon of GFP infection in many strains of Montipora, notably the WWC Grafted Cap, and we know that if left to its own the GFP will take over and obscure the orange base coloration. However with the Kung Pao Monti, it seems like the GFP provides an overlay of color, and perhaps this explains the very unique, prismatic coloration of this eye-catching Montipora strain. 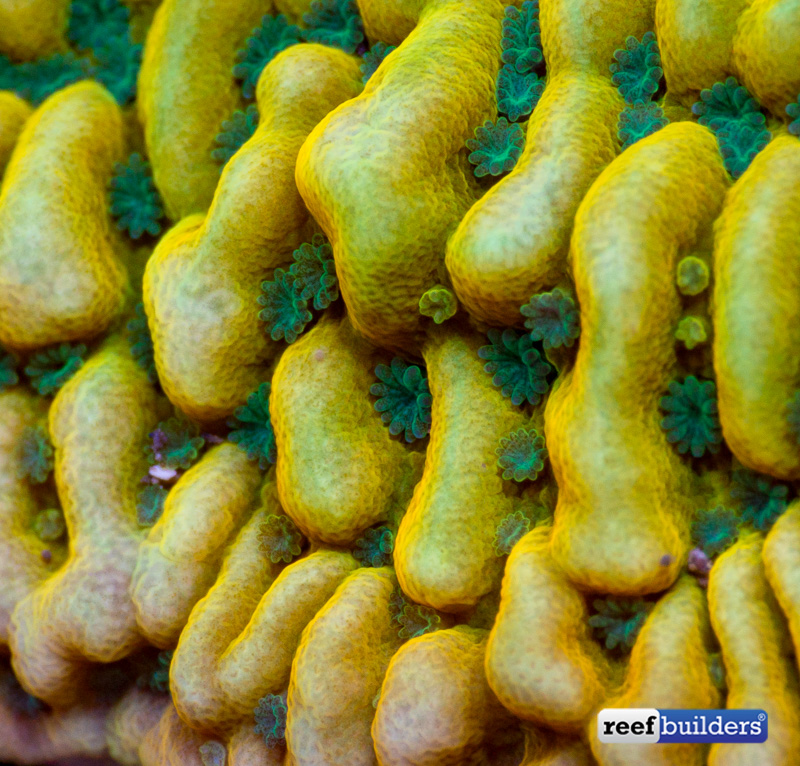 Of course it’s not just about color with the Kung Pao Monti, it’s also about texture. Montipora palawanensis has thick, smooth nodes which irregularly fuse, creating a really wicked texture. At the edges of the frag or colony the nodules turn into ridges running perpendicular to the growth margin, however the degree of this texture’s expression is dependent on the particular strain, and the environment it’s grown in.

In moderate light and flow, M. palawanensis will grow more plate like, with the the nodules looking more like ridges. In high light and high energy environment, Montipora palawanensis  such as the Kung Pao Monti pictured here in the tank of Dave Botwin develops thicker and more developed nodules, and a more robust, submassive growth form. 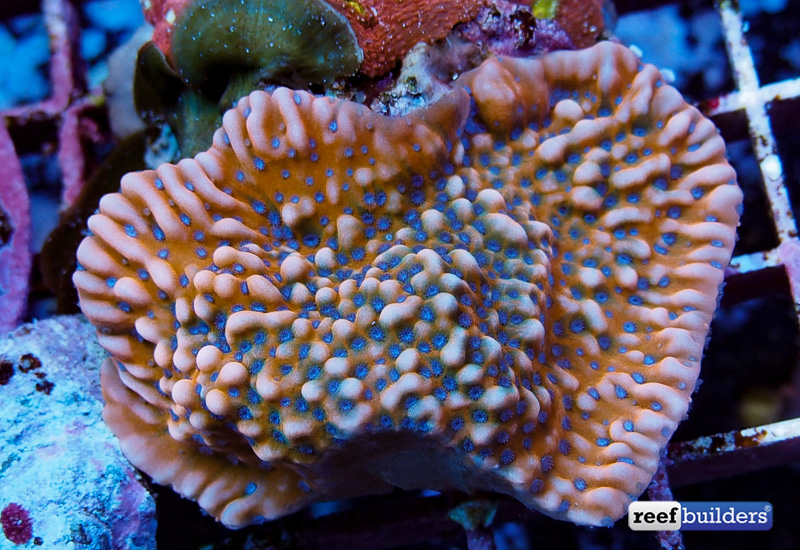 Hat tip to Dave Botwin for growing out such a lovely colony of this coral. He was one of the first reefers to get a piece of this coral and it has developed into a truly lust-worthy colony in his tank, and before you ask, it’s been exclusively under Radion G3 Pro LEDs.

When you compare the orange M. palawanensis pictured above and the green one pictured below, you can perhaps see how the Kung Pao Monti seems to share in the coloration of both of these strains. Regardless of the reason for this coral’s coloration, as good as these pictures turned out, you really have to see it in person to truly appreciate the depth of color in the Kung Pao Monti. 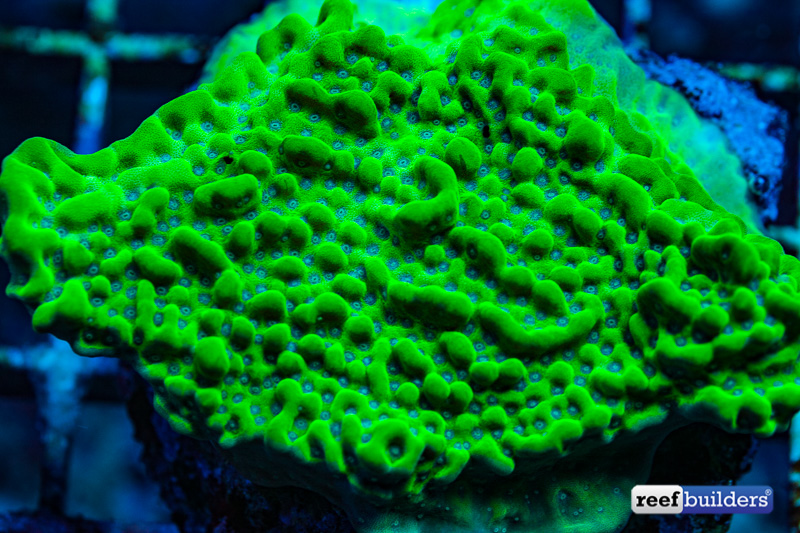