Palau is home to eight of the ten known species of giant clams, making it one of the epicenters of giant clam diversity in the world. Better yet, Palau is also home to the world’s first and still oldest operating farm of giant clams.

The Palau Mariculture Demonstration Facility is an amazing place that we got to visit on our last day in Palau, about a week ago. The three decade long history of the giant clam hatchery means that at least two generations of giant clam farmers have been able to acquire seedlings from this hatchery.

The hatchery has helped to create a long term effect of helping to bolster and in some cases increase the population of some giant clam species in local Palauan waters. When we got to the PMDC it was easy to see why, since this place operates very much like fish hatcheries that stock lakes and streams with baby fish.

I’ve been to many countries that are home to giant clams, but no place has quite the abundance of giant clams that Palau has, and having a giant clam hatchery is the reason why. We hope you enjoy the video we’ve put together below and if you like what you watch be sure to subscribe for many more videos to come.

I knew that the PMDC would have loads of giant clams in their clam garden, but nothing could have prepared me for the fields of giant clams that I saw. Nearly every species of giant clam was represented – crocea, maxima, gigas, derasa, and hippopus, although squamosa were few, and I didn’t see any teardrop clams.

All of these clams are placed here either to grow out, or mostly, as broodstock to use in clam breeding when the season is right, and the clams are ready.

It was hard not to get lost in the kaleidescope of shapes and colors, and I could have easily spent a few dives observing and admiring all the different clams. However i was here to see one clam in particular, and finally I spotted one off by itself. 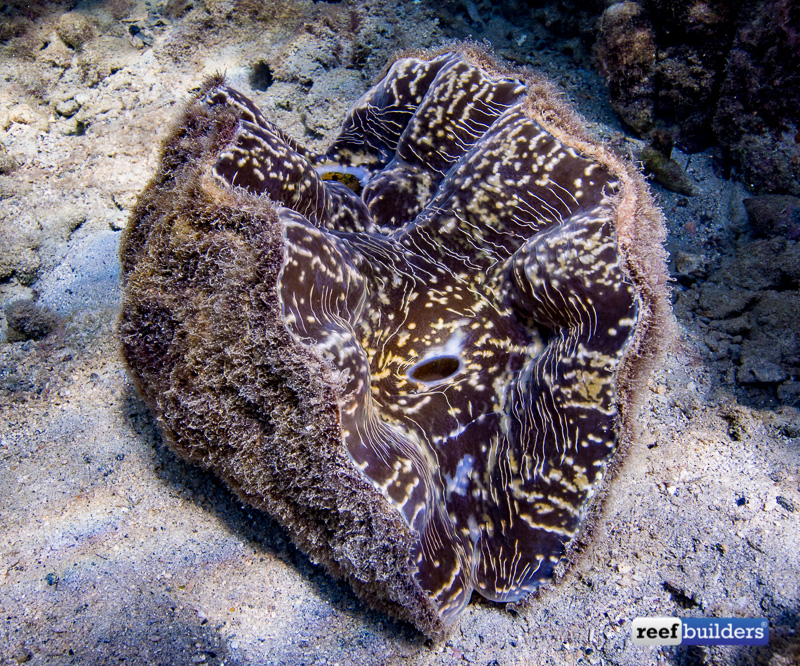 Hippopus porcellanus, the Porcelain Clam, is arguably the rarest living species of giant clams. It is only known from few parts of the Philippines and Palau, with rare sightings outside of this region.

There are very few pictures of this giant clam species, and this might me one of the very few videos showing this species in this much detail.

SinceI had never seen this clam for myself, I had always imagined this species as being just slightly different from the very common Hippopus hippopus. Boy was I wrong because the Porcellanus clam is very distinct, both in the shape of its shell, and the appearance of its mantle.

Like the Hippopus clam, Porcelain clams have a mantle that does not extend past the edge of the shell. And while the pattern of the mantle shares a similar motif with common Hippopus clams, the Palauan Porcellanus has an amazing appearance all its own.

The mantle if mostly dark, like a light black base color. But the fine concentric lines are much more numerous, and much more pronounced due to the dark background, almost like a ‘Black Tiger’ Hippopus clam. I had no idea that the Porcelain clam would be so beautiful in person, and it was worth waiting 20 years to finally see one. 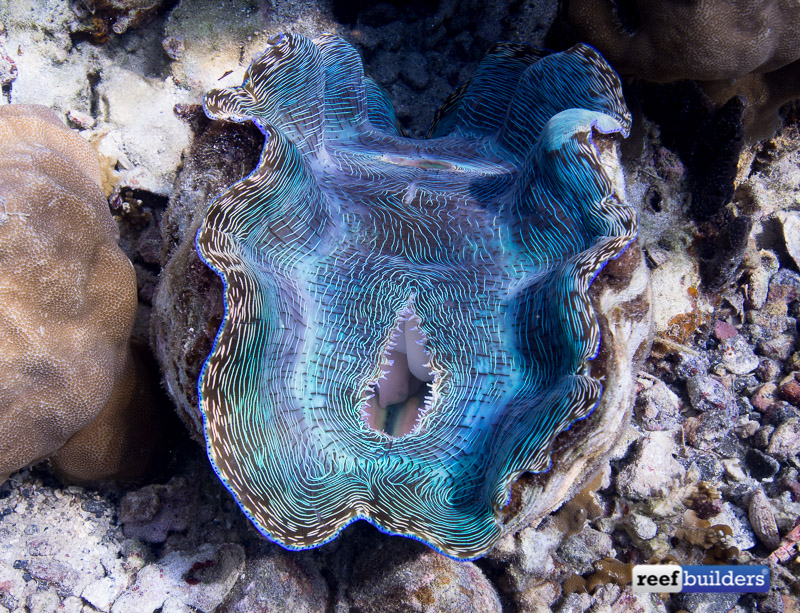 Of course this clam garden is home to many other stunning clams, not the least of which is this incredible blue derasa clam. At around 16 inches long, this clam simply blinded me with color in this shallow water.

Even more rare and out of this world, is this very unique bicolor derasa clam, with pattern only visible on one side of its mantle. I don’t what causes this two-faced appearance, but it’s very special either way. 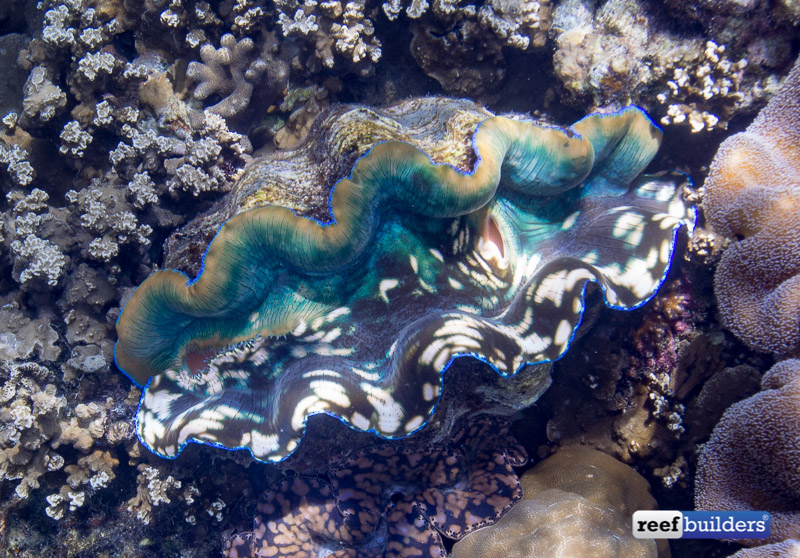 After inspecting these beautiful Derasas, I turn my attention to the big daddy of giant clam, the truly giant species, Tridacna gigas. There very little reference for size and scale in these videos, but the gigas clams are all more than three feet or one meter long, and many of them are bigger.

Growing sometimes much bigger than a person, the Gigas clam is the biggest bivalve, and it grows the biggest shells in the world. Not only are these clams very big, but they’re also very heavy, and I have no idea how the PMDC handles these for breeding, but I hope to find out next time.

The 10th ReefStock is just Over A Month Away!

Genicanthus spinus: First Video of this Rare Angelfish from the Cook Islands