The white chin surgeonfish is closely related to a whole cluster of large surgeonfish species including A. xanthopterus, A. leucocheilos, and A. maculiceps. The new surgeonfish was noticed due to its previously mentioned white chin, a rusty orange line at the base of the dorsal fin as well as an interesting series of fine irridescent blue lines on the face – genetic analysis further supported the new species designation.

There are no living pictures of this fish because this fish was not discovered in the ocean, but offered up as food in a couple Filipino fish markets. The markets where the new Acanthurus albimento was discovered were restricted to a small strip of Lamon Bay on the island of Luzon.

This particular region of the Philippines is interesting because Lamon Bay is fairly cut off from the rest of the Indo-Pacific. This body of water faces the Pacific Ocean, with the prevailing Kuroshio Current potentially acting as a dispersion barrier, keeping species inside of the bay. 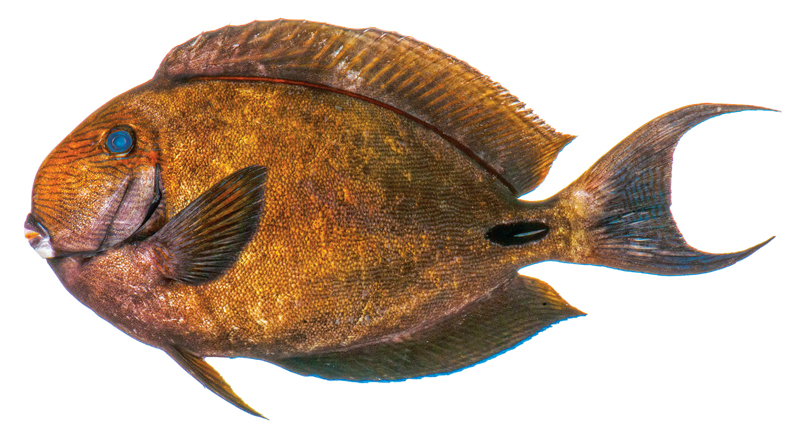 The Philippines is a huge group of islands which holds many surprises, including massive schools of migrating surgeonfish we personally documented in Lubang. It’s no shocker that the ocean still holds many unexpected surprises and surely increased exploration of both the natural environment, and fish markets, will divulge more surprises in the future. [JOSF]