The Lembeh Strait is a holy grail amongst scuba divers. This relatively small channel of water is home to the highest concentration of crazy critters known anywhere under the sea. Scuba divers from around the world flock to Lembeh for the chance to spot a number of rare nudibranchs, octopus, pipefish, and frogfish but we were left asking, what about the corals?

The style of diving in the Strait is muck diving, and Lembeh is revered as the Mecca of muck. If you’re not familiar, muck dives are shallow between 30-60 feet deep (10-18m), above dark mucky sand. The dark sediments are left by centuries of nutrient rich volcanic soil which are perfect for growing a variety of seagrasses and marine vegetation. 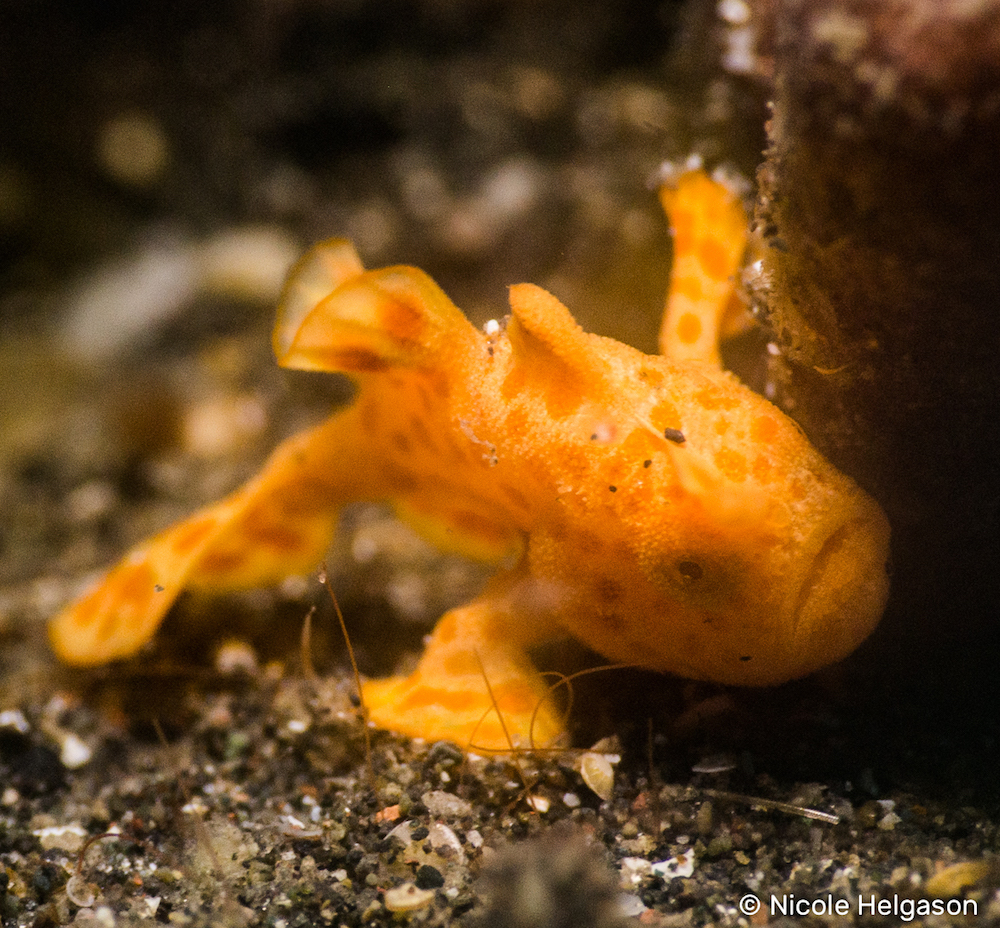 This productive seagrass habitat then becomes home to the strange and wonderful critters you find in Lembeh, including the scuba divers! When divers think of Lembeh the picture of a placid frogfish crouching above dark sand comes to mind.

Divers and photographers all come to Lembeh with a wish list of critters they can’t wait to find. Yet, when it comes to corals you’d be hard to pressed to find a diver who knows how to spot a rare coral, let alone one who comes ready with a wish list of species.

I brought a coral wish list, does that make me weird?

The coral diversity in Lembeh is just as strange and it’s a shame more divers aren’t paying attention. Keeping a saltwater aquarium has allowed me to foster a deeper appreciation for corals, one that is hard to develop without growing your own.

The knowledge I have gained as an aquarist has opened a completely new dimension underwater. Searching for corals in the wild has allowed me to see the reef with new eyes and my scuba diving experience will never be the same again.

In Lembeh some of the rarest and most unusual corals like Acanthophyllia, and Trachyphyllia thrive in these mucky habitats and nowhere else. However, if I wasn’t an aquarist, im sure like most divers these corals would go unnoticed.

On my first dive in Lembeh, we headed out in search of coral. Our guide, and Critters At Lembeh marine biologist, Agus, knew what I had my eyes on, and he took us to the Makawebe dive site to find disk corals and Euphyllia.

We had a briefing on the boat and the guides used a colorful critter book to point of some of the frogfish, pipefish, weird fish, nudibranch, shrimp, and octopus (no corals) that we might see on this dive.

We rolled back into the water, and right away we were greeted by a field of plate corals, and hills of Euphyllia just as Agus had promised. He only mentioned the Euphyllia because it was something I made a point of asking for, and I was surprised this coral was not described in the briefing for other divers to admire.

We spend the first ten minutes diving around the coral before heading down the sandy slope to find critters in the muck. Down past 30 feet (10m) the coral diversity dropped off, but just like the search for rare critters, the unusual factor of corals ramped up.

Halfway down the slope around 50 feet deep, (15m) Agus pointed out a colorful flower like coral. I quickly identified this as a Trachyphyllia and gave him an underwater fist bump for finding such a prized species.

I’ve never once seen Trachyphyllia in the wild and I quickly fired up my camera to document this sighting.

One Trachyphyllia turned into a dozen, each one more intricate than the last. The colorful specimens were sitting directly on the fine sediments and the only other corals in sight where basketball sized flower pots (Goniopora) and elegance corals (Catalaphyllia).

After the dive, I asked Agus if he knew what those colorful corals were. He admits to seeing them before but never knowing the name. This was the perfect example, the guides didn’t even mention a few of the standout corals we could find on this dive.

Makawebe was an exceptional coral dive, however, after ten dives in the Strait I realized they were all above and beyond in terms of rare and unusual corals.

We found several attractive LPS colonies of Blastomussa, Micromussa, Indophyllia, Acanthophyllia, Catalaphyllia, and Goniopora, growing on rocks or sitting directly in the muck. I have never found so many of these corals in one place.

As a dive professional and coral lover, I often wonder why divers aren’t spending more time looking at corals. Aquarists have mastered the names of these unusual species prized for their psychedelic beauty and elegant polyps, so how come divers haven’t caught up?

I guess this boils down to the professional side as divers primarily focus on what their guides are showing them. I’ve always been obsessed with corals, but being an aquarist lets me truly appreciate each species.  I want to change how divers see the reef by combining my aquarist and scuba skills and have been traveling the world teaching people about corals, particularly dive professionals.

Last month I was named a Coral Communicator for PADI (the largest organization of divers in the world), a step in the right direction for introducing corals to the masses. And, if you didn’t already know I also have my own website appropriately named ReefDivers, where I write articles about coral identification and scuba diving.

Luckily we are starting to see a shift. As corals are becoming headline news, divers and professionals are paying more attention to these animals, and rightfully so. Corals are the foundation of the marine environment and deserve our attention. Lumping them all together under the term corals reef is far too general for such a diverse and unusual group of animals.

Next time you go diving in Lembeh stop and take a second to look past the pipefish and enjoy the unusual corals of Lembeh Strait. And, if you would like to join me on a future trip send me an email or just let me know in the comments below.