Have you ever thought about underwater landscapes—or better yet reefscapes?
The reefscape extends as far as the eye can see. It includes, sponges, sea weeds, corals, and critters, but more importantly, it includes the hills, valleys, walls, and other physical features of the ocean floor.
When it comes to underwater photography I’m on the lookout for individual coral colonies, most of which are less than a meter wide. But sometimes an epic dive comes along that makes you take a step, or rather a fin back, and appreciate how larger-than-life the ocean can be.

While diving in Tela Honduras, I found a reef that warrants epic reefscape statues. I found myself floating high above the never ending coral reef. I knew the only way to capture the essence of a reef was a wide angle reefscape shot.
A typical dive profile in Tela starts with coral ridges between 12m-14m (40-45 feet) deep with sandy valleys between ridges down to 18m (60 feet). The top of the ridges are inundates with lettuce coral (Undaria tenuafolia) while ridges are covered in brightly colored cactus corals (Mycetophyllia). 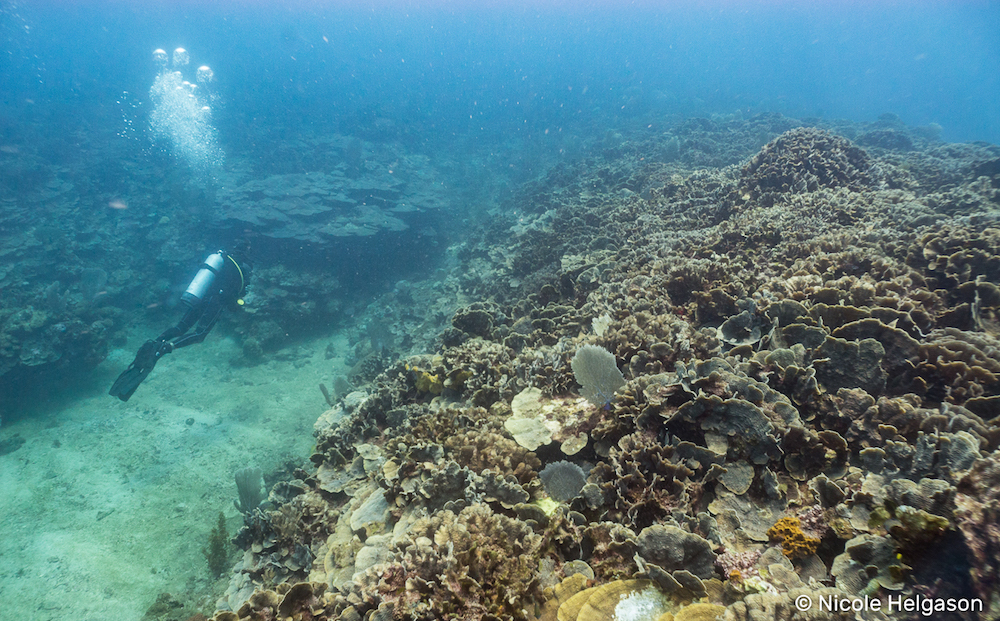 Scuba diving in Tela is a privileged sport. The coral reef is relatively unexplored and there is only one active dive shop for the entire 38km bay.
Diving in Tela is limited to the summer months between April and September give or take a month at either end. Strong currents and low visibility during winter months limits the diving season in Tela.
One of the features which stand out in Tela is the age of the reef. Jumping in the water feels like you’ve jumped off a pirate ship. The corals are just that old. This is what contributes to the grandiose scale of the reef in Tela.

In Tela, the coral polyps have adopted a strength in numbers approach to carve out and maintain their position on the reef creating large sprawling colonies of coral. One of the larger colonies of Star Coral (Orbicella faveolata) is estimated to be living in this bay before Columbus arrived in Honduras, and my guess is they could be even older than that.
We wouldn’t be exaggerating to say some parts of the reef have over 100% coral coverage, as everywhere you look in Tela corals are in competition with each other for space.
To really appreciate this reef we had to take a deep breathe and rise at least three meters above the reef, and only then can you gain the true perspective of this epic reef. After a handful of dives we soon realized that our reef scape photos of Tela were the most compelling and representative of the environment.


Although the visibility was limited to 30 feet (10+ meters), after a bit of post production our photographs turned out better than expected and we developed a few simple tips for taking these large scale reef shots.
See also  Two miles of Twilight Zone corals discovered off Tahiti

To capture the reef we are using a simple point and shot camera, Nikon Coolpix FP7100 with a Fantasea housing and wide angel lens. At this hight and scale it is fairly pointless to use external lighting as this would mostly cause backscatter in the water column and fail to cover the entire scene.
Instead we took advantage of the nature light illuminating this shallow reef. We used a low aperture setting between f2.8 and f4.5. and adjusted the shutter speed as needed. Most of the shots were between 1/60 and 1/200 We kept the photo slightly underexposed in the camera opting to add exposure in post. We kept the ISO at 100 for all photos. 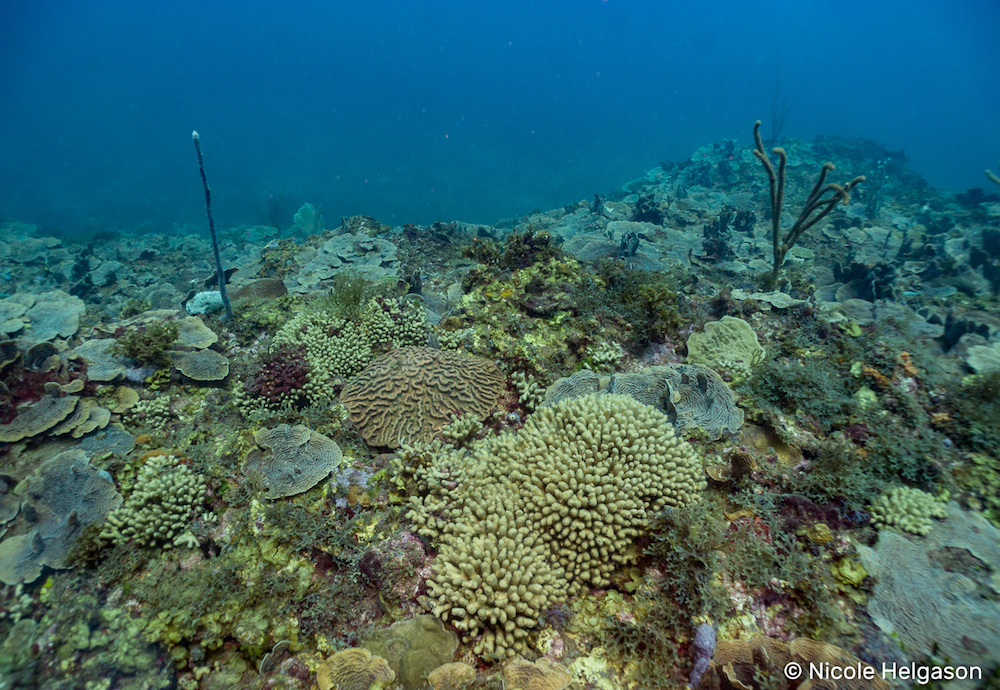 Our workflow in Lightroom to edit the images was fairly simple. I started by adjusting the white balance and tweaking the highlights, exposure, and shadows. We let the reef do the talking and just tried to bring back a natural feel.
Everyone in Tela has been marveling at these wide angle reef shots, but to be honest it’s hard to take credit for the pictures where it’s the exceptional coral reef that has done all the work, I just hit a button! 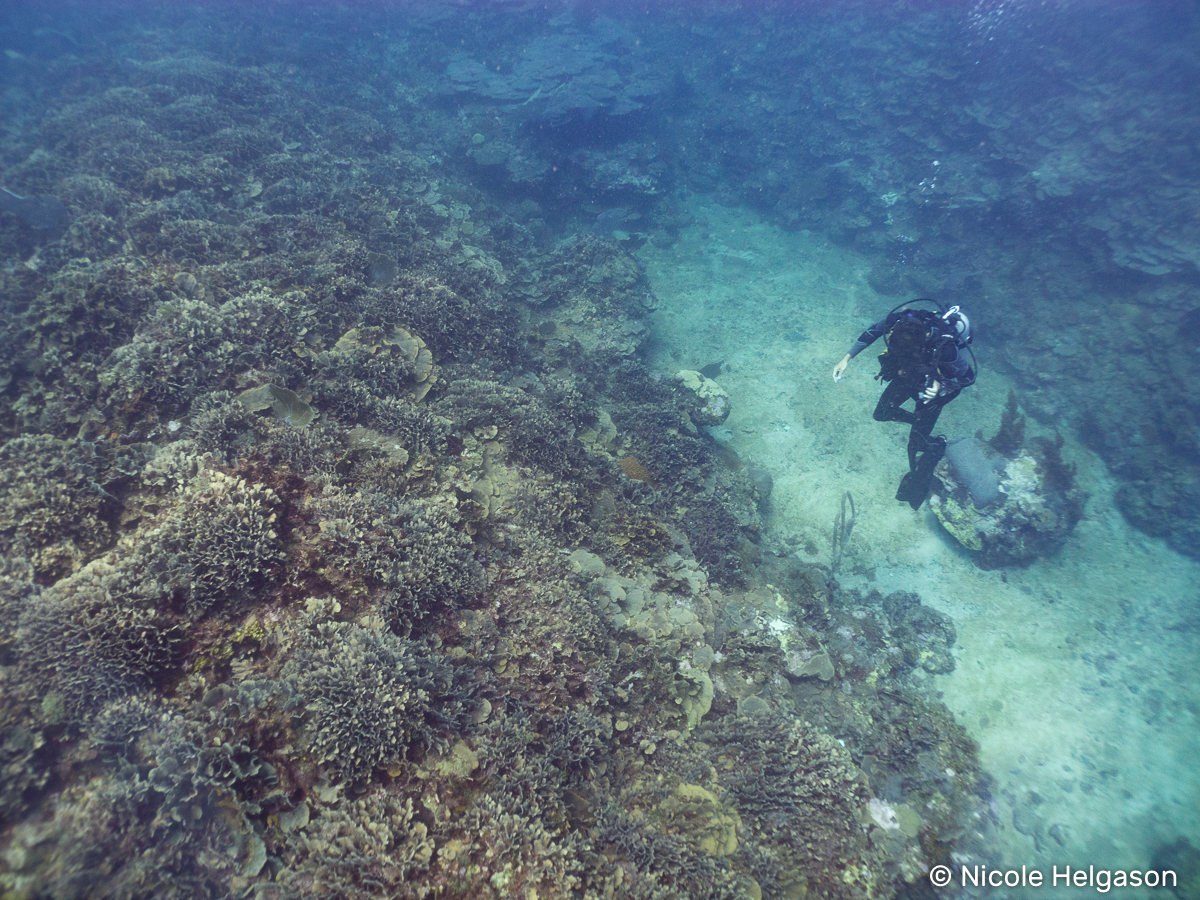 The coral reef in Tela is a time capsule of how Caribbean reefs once were, and to capture the essence of this reef you have to fly above to take-in the epic scale.
Next time you head out diving swim a few meters above the reef and take some wide angel reef shots. These images can add context and depth to your dive photo album, and by simply manipulating a few manual settings in your camera natural light is all you need for a breathtaking reefscape shot.

Can't Say I've Ever Seen A Cyclo Like This One!