The reef aquarium hobby sure is moving very fast in a lot of new and interesting directions. Yesterday we discussed the advancement of automatic aquarium water testing, something which we could have wish-listed five, ten or even twenty years ago.

However one aquarium automation that would have been a little more difficult to foresee or imagine is the advent of aquarium roll filters. We’ve used a form of felt or filter socks to remove unwanted and waste particles for over a hundred years, when someone first stuffed cotton floss into an air driven filter.

Mechanical filtration hasn’t fundamentally changed in all that time, we still basically stick filter material in by hand, and remove it by hand, usually long after it has become clogged. As with many of the new products shaping the future of the reef aquarium hobby, this new generation of filter rolls automates the process of using and replacing physical filtration media. 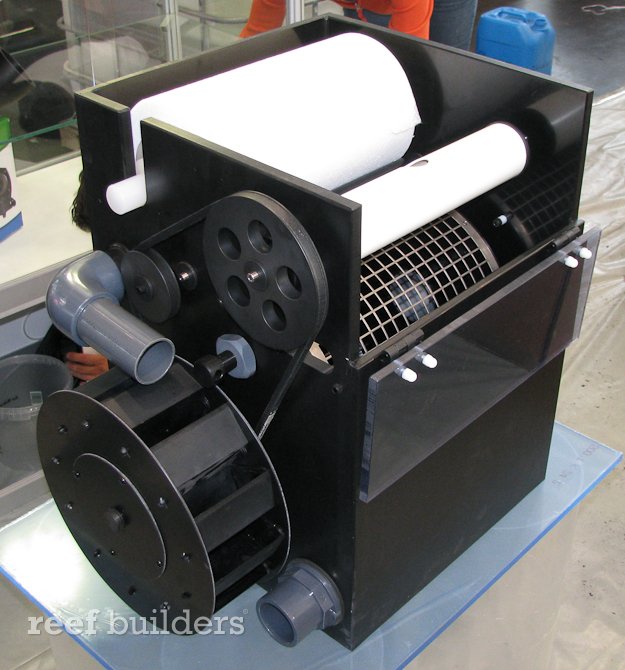 The potential for roll filters really grabbed our attention at InterZoo 2010 where we saw the first consumer grade mechanical filter roll by Genesis called the Evo3 Titanium. While huge, expensive and intended primarily for use in ponds, we saw a glimpse of the future of what could be possible if the technology improved.

Apparently D-D The Aquarium Solution did too because they worked together with Genesis to develop and release the ‘flat pack’ PowerRoll aquarium filter in 2012. This was essentially a miniaturized version of the Evo3 which cost ‘only’ $1,000, and it was a valiant effort, however the unfamiliarity with the concept, high price and reliance on gravity driven turning wheels didn’t quite deliver on the promise of filter rolls.

We’d have to wait an additional two more years for InterZoo 2014 to witness the Thieling Rollermat, the first truly consumer grade filter roll designed for the average home aquarium. Priced at a very reasonable $400 and powered with a motor to turn the spool of filter rolls, the Thieling made this concept much more accessible and approachable than anything before it.

Despite having been available for more than three years, this is the point at which I confess that I’ve never even used one! Despite being such a fan of the concept, you really have to have the space and the right kind of sump to implement one of these. This is still a very reasonable device, but much in the same way our Wet-Dry trickle filter sumps became modified to readily accept protein skimmers, our current generation of Berlin Style sumps will need some modifications to truly be compatible with products like the RollerMat.

Or . . . we can examine a fork in this roadmap to see two more directions that filter rolls are going. On the one hand, killer new expandable filter rolls like the Klir Filter are easily adjusted in the X and Y dimension to try and fit into the existing framework of our berlin style reef aquarium sumps. Priced at $249 the Klir Filter, with wide distribution from CoralVue, is very likely to be the first filter roll device that many reefers use, especially in North America.

On the completely opposite end of the spectrum, custom and bespoke high performance sumps from the likes of Royal Exclusiv are building new ‘Fleece Filter’ sump designs with a powered filter roll built right in. Even German company HP Aquaristik has built a beefy filter roll that is designed to function as a sort standalone pre-chamber to the reef aquarium sump.

There’s one more dark horse contender in the filter roll space that we wrote about earlier in the year, but haven’t really heard much from since. The British company ClariSea teased us with two very radical designs for an aquarium roll filter which have a unique drop-in function with a very minimal footprint. The ClariSea comes in two sizes priced starting at £239 (~$318) and while it doesn’t have the modularity of the Klir Filter, perhaps its unique form factor will render it adaptable to our current reef sumps.

We are just barely beginning to scratch the surface of what will be possible with roll filters, and the thought of immediate nutrient export from the aquarium before it has a chance to breakdown and pollute the water is incredibly exciting. While we only have a small handful of tangible products to choose from, our past 7 years of covering the progress of filter rolls for the aquarium hobby guarantees that we’ll be seeing and reporting on a lot more devices like this in the near future.

Join us tomorrow as we dive into part three of our look at the next category shaping the reef aquarium hobby, dosing pumps. And if you haven’t seen it already, definitely give a read to our opening article about the new wave of Alkalinity monitors for reef tanks.