Fire coral (Millepora sp.) is the VERY FIRST coral every scuba diver should learn to identify. These fuzzy orange corals hide a fierce sting and should be avoided at all cost.
Colonies have a smooth surface with a pale yellow to golden orange color, and light to white colored branch tips. The surface of the coral is covered in thousands of translucent stinging tentacles which the coral uses for defense. Fire corals aren’t true stony corals, but no list of Caribbean corals would be complete without them. 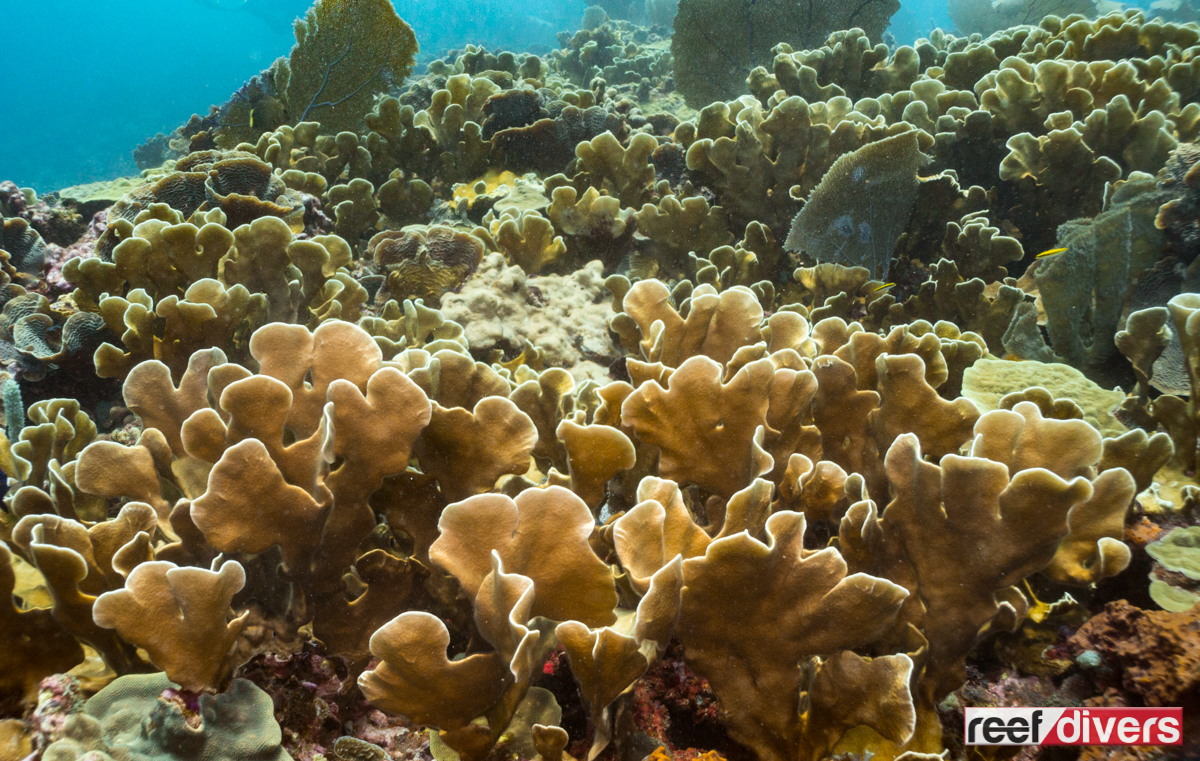 Fire corals are more closely related to jellyfish than they are stony corals. This group of animals is in the Phylum Cnidaria just like stony corals, but are in the class Hydrozoa, making them Hydrocorals (not stony corals).
Millepora fire corals have a smooth surface covered in tiny pores hence the name “Millepora” or thousand pores. Fire corals have three types of pores which are for eating, stinging and reproductions. Stony corals, on the other hand, are covered in corallites, with a single polyp in each corallite.
The thin tentacles you see on the corals are the stinging tentacles and the ones you need to worry about! While not life-threatening, itching, redness, and swelling can happen simply from brushing up against a fire coral, and it’s especially painful on your fingers or face.

What To Do If You Are Stung

The symptoms of a fire coral sting can vary, but will normally happen within 10-20 minutes of touching the corals. For small stings, you might feel mild itching, or burning, redness, and blisters. In extreme cases of allergic reaction fever, gastrointestinal or cardiovascular problems can result.
Run the affected area under water fresh or seawater, and apply acetic acid like vinegar or isopropyl alcohol. If you can see any stinging tentacles remove them with tweezers. If the itching continues you can put a hydrocortisone cream, or apply a cold compress.

There are three species of fire corals in the Caribbean. Branching, blade, and box type. Fire corals are always orangish yellow with a smooth surface covered in thousands of stinging tentacles.

Fire coral is aggressive and adaptable meaning it will overtake neighbors and grow over their skeleton. This can lead to some interesting fire coral shapes that don’t fit the mold. Just know that fire coral can encrust over anything.
Branching fire coral Millepora alcicornis especially loved encrusting over Gorgonians, resulting in some deadly underwater photographs. When trying to photograph these coral make sure to leave enough space between you and subject or risk a painful sting.

Millepora complanata forms thin upward facing blades. Millepora complenata is an aggressive coral which can overtake other corals. Colonies of complanata can grow to an impressive size and are common in shallow reefs.

Millepora squarrosa forms intricate box-like or star-shaped fronds. Colonies are usually compact and found in shallow reefs with exposure to surge or current. Small perpendicular ridges can form near the margins of the coral.

Roa rumsfeldi Is A New Species Of Butterflyfish From The Philippines!