The Orphek Kaspian LED pendent is ditching the white LED multi-chip and using a unique all-color multi-chip LED to dial in what they call the perfect white spectrum.

We had a sneak peek at the original Kaspian a few years ago and haven’t heard much since. Well we were pleasantly surprised to get an update from Orphek and were fascinated with the new multi-chip LED they have.

This Japanese LED features 120 LEDs on the chip with 14 different types, and as we said, no white LEDs on board. The company notes, they focused the light output to be in the sunlight spectrum, dialing up what is beneficial to corals, but cutting down on the green, yellow and red spectrum light that fuels algae.

“You can see very wide blue violet and drop down at the green yellow like in normal white LEDs,” Orphek mentioned in an email. “But we still have other type of LEDs — green, cyan and orange-red to create the white look.”

This makes total sense as white light is actually a combination of colors allowing you better ability to control the color spectrum by ditching the traditional white LEDs altogether. As far as we know, Orphek is the only aquarium lighting company using this type of chip.

If you look at the color array of the chip, you’ll see its dominant in the blues with 51 diodes dedicated to the 440nm to 470nm spectrum. There are 25 dedicated to the violet/purple spectrum (390nm to 420nm) and the rest are in the green, yellow, orange and red spectrum dispersed around the chip. 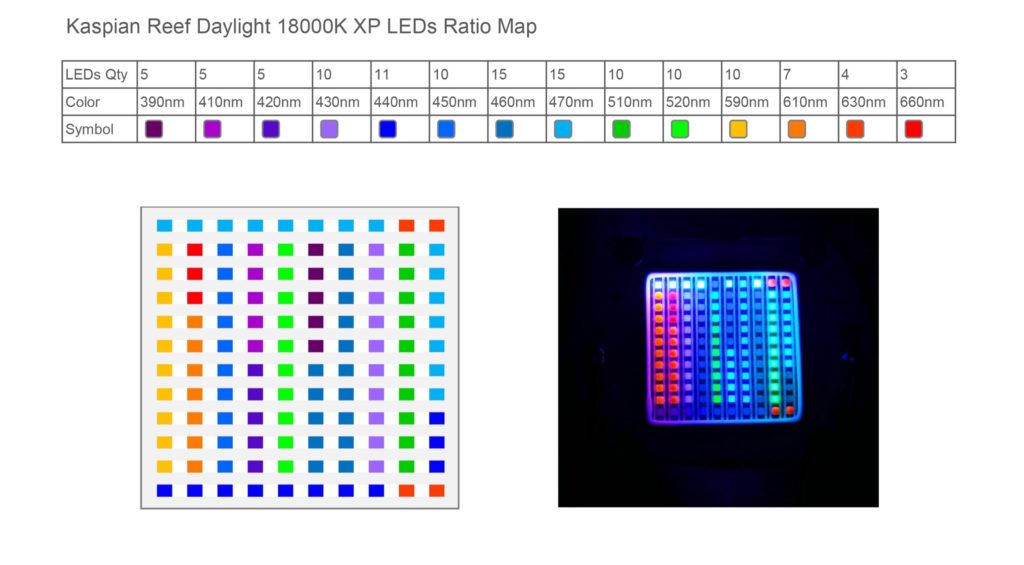 Each of the 120 individual LEDs on the chip are capable of 3W output, but Orphek is driving them at 1W each for a total of 120W of power output, but with the ability to pump out 360W is pretty impressive too.

These are mostly utilized for public aquariums or larger systems. The company also plans on incorporating this into other lights in the future.