We get it, you’re busy and don’t have time to sit around sifting through books or perusing our Guide to Caribbean Corals. So we made this quick guide to branching corals so you can easily identify Caribbean species at a glance.
We’ve published 5 quick guides for Branching, Mound & Boulder, Large Polyp, Plating, and Meandering corals. Follow us on Facebook to stay up to date with all our coralicious content.
In this quick guide, we have a total twelve species of Meandering corals in eight genera. Meandering corals are commonly known as brain coral, maze corals, and cactus corals, and meandering refers to the irregular patterns created by the coral ridges across the colony.
Since this is the quick guide I will give you a few tip to identify each coral and if you would like to learn more about each species there is a link describing each coral in more detail.

Colpophyllia is am important reef-building species, forming impressive boulders. The common name for this coral is the boulder brain coral and the easiest way to identify this species is looking at the fine grooves running from the ridge tops to valley centers.
1. Colpophyllia natans – Boulder Brain Coral 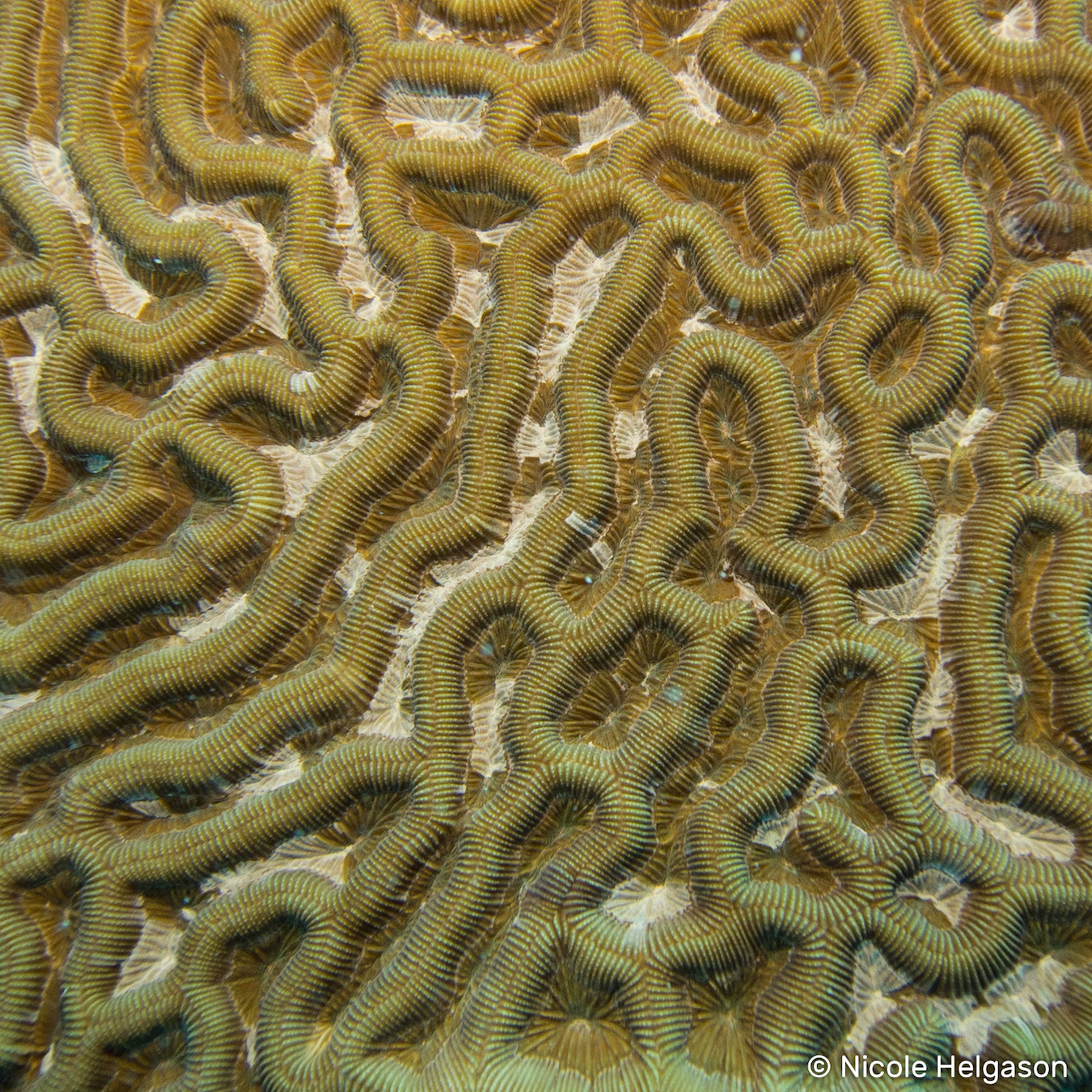 Meandrina stands out from other brain corals with thick valleys that have a slight peak when they meet at the top of each ridge. It is rare for the valleys to join. Instead, this coral has prominent teeth which alternate, similar to a zipper. The common name for this coral is Maze Coral.
2. Meandrina meandrites – Maze Coral 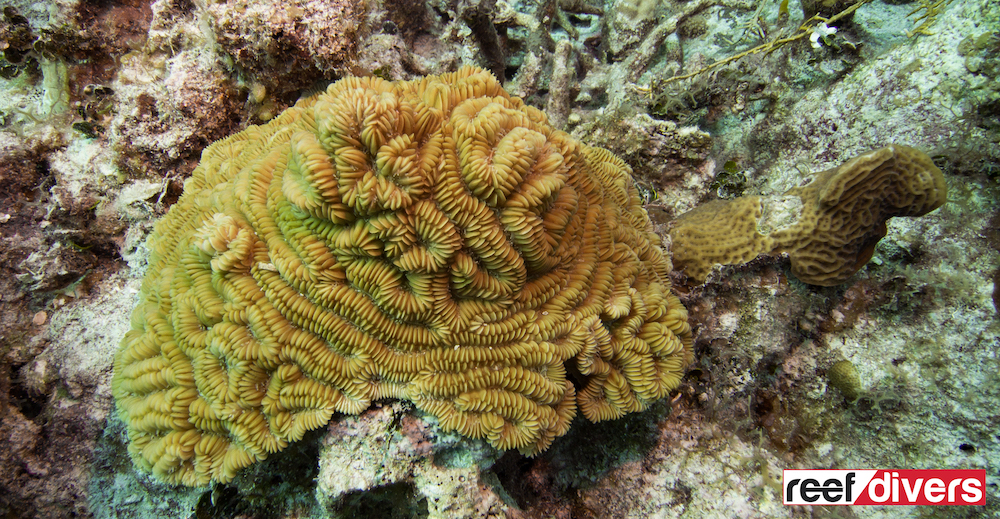 Manicina corals have two distinct growth forms. The most common are small oval shaped colonies with a long continuous central valley and shorter valleys on each side. The second form is dome or hemispherical shape. These colonies have more valley and ridges winding through the coral.
3. Manicina areolata – Rose Coral 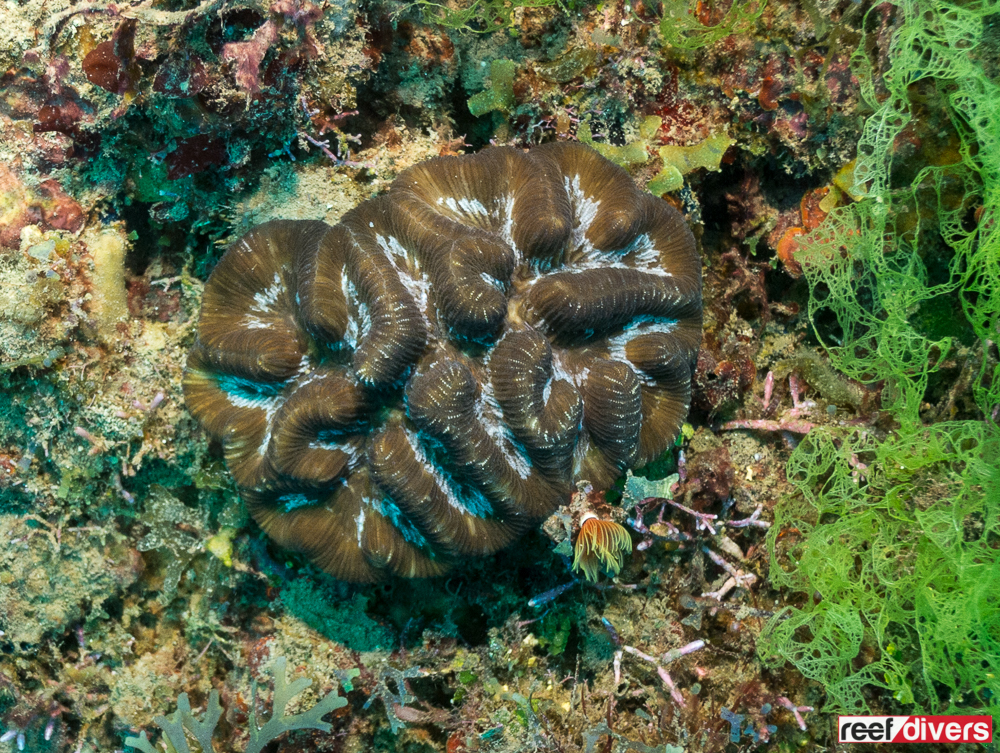 Isophyllastrea has large polygon corallites and forms hemispheres or domes. Although distinct this coral is still uncommon and you will need a keen eye to identify this species. Corallites are between 10-20mm wide and each corallite contains one or sometimes two polyps.
4. Isophyllastrea rigida – Rough Star Coral 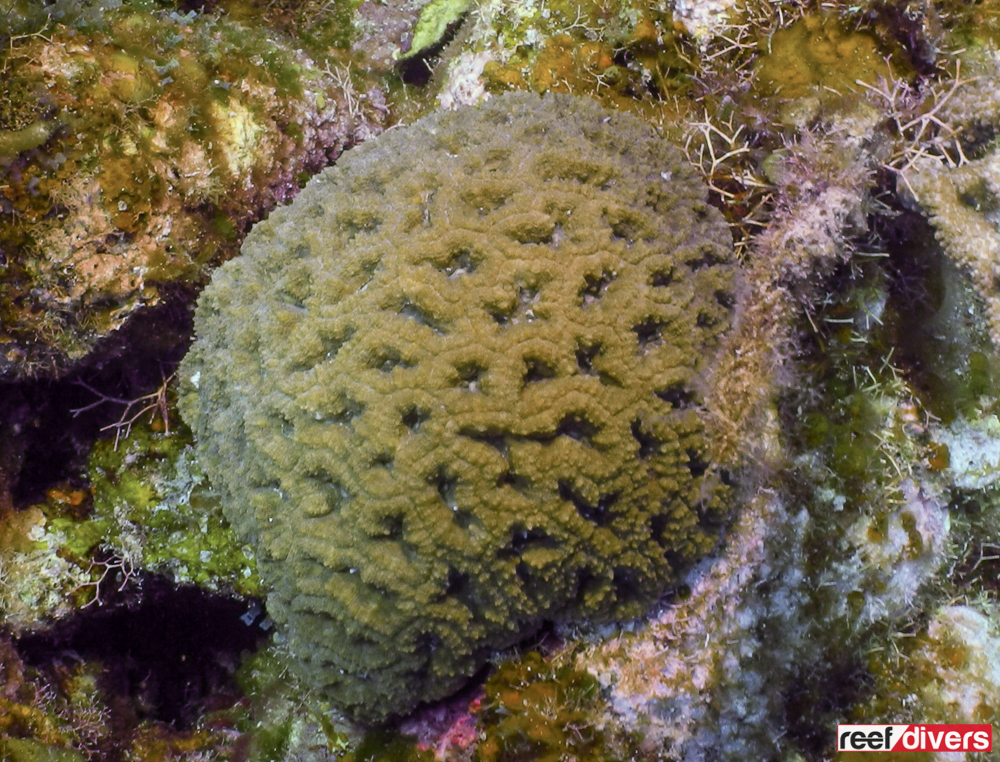 Diploria is the most recognizable of all brain coral species. The grooved brain coral grows into large hemispherical colonies and has wide valleys with visible grooves that twist and turn their way throughout the colony.
5. Diploria labyrinthiformis – Grooved Brain Coral 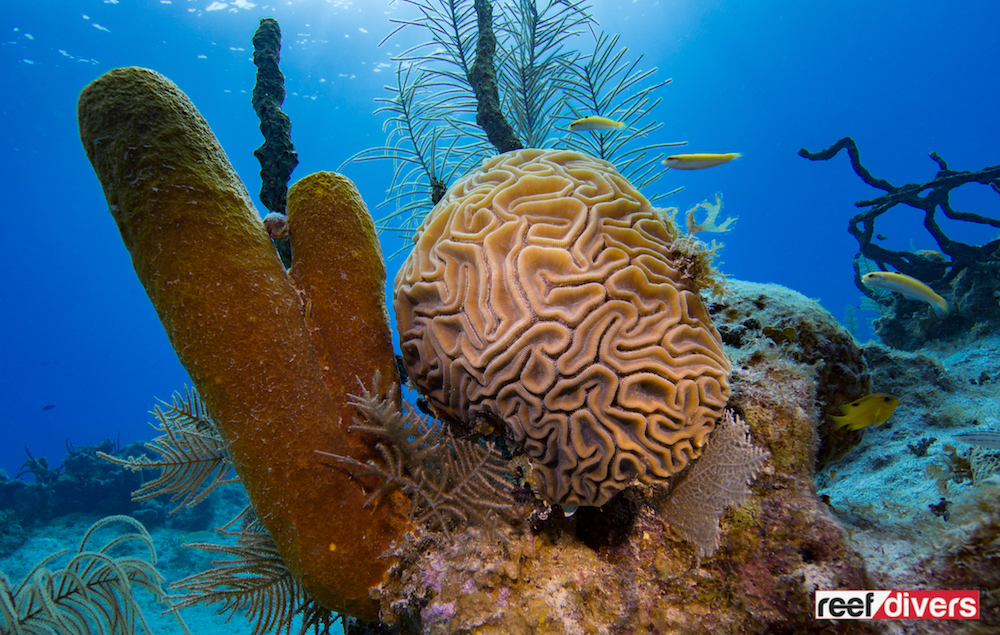 There are two species of Pseudodiploria and if you are searching for these corals in an older guidebook they will be classified as Diploria. The two species are P. clivosa and P. strigosa also called the knobby and the smooth brain coral. The best way to identify this coral is the narrow ridges which are much smaller than Colpophyllia or Diploria.
6. Pseudodiploria clivosa – Knobby Brain Coral
7. Pseudodiploria strigosa – Smooth Brain Coral 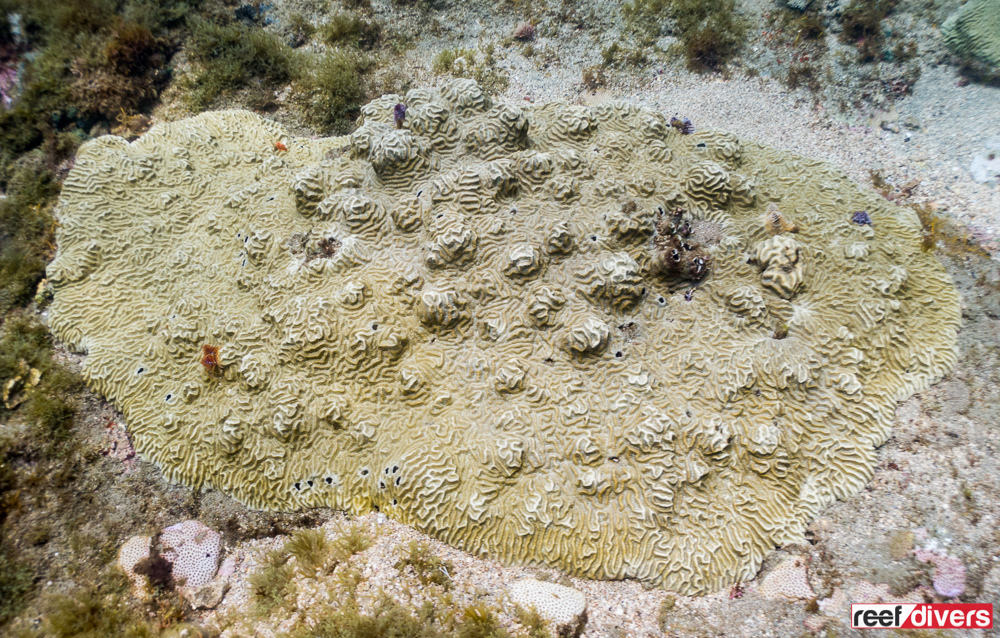 Dendrogyra grows into pillars, spires or columns that can reach 6 feet or (2 m) tall. This coral is listed as endangered and is the only Caribbean species that grows into large towering pillars.
8. Dendrogyra cylindrus – Pillar Coral 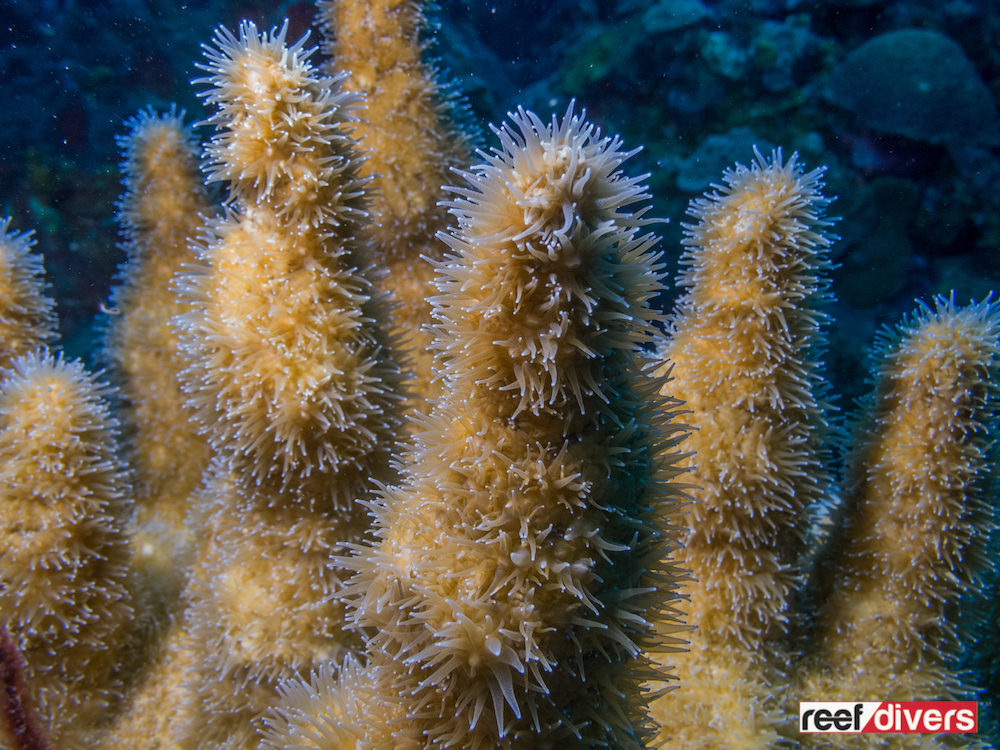 There are five species of Mycetophyllia, although this quick guide only has 4 as I have yet to find the fifth ridgeless species. For this explanation, we can just focus on the first four and most common Mycetophyllia corals mentioned in this list.
The knobby cactus coral is more of a flat, encrusting shape. This coral has minimal ridges that are disconnected can form little knobs. The low ridge cactus coral and ridges cactus corals can be difficult to tell apart and some scientists believe they may just be different growth forms of the same coral. To identify these species you have to look at the ridge of the ridges and if they connect in the center of the colony or not.
The Rough cactus coral has thin ridges that close around corallite leaving enclosed section and valleys with a handful or more colorful dots. The color of the corallite is often a contrasting color from the tissue giving this coral a polka dot pattern.
9. Mycetophyllia aliciae – Knobby Cactus Coral
10. Mycetophyllia danaana – Low Ridge Cactus Coral
11. Mycetophyllia ferox – Rough Cactus Coral
12. Mycetophyllia lamarckiana – Ridged Cactus Coral

For easy quick access to this quick guide save the graphic below on your phone. 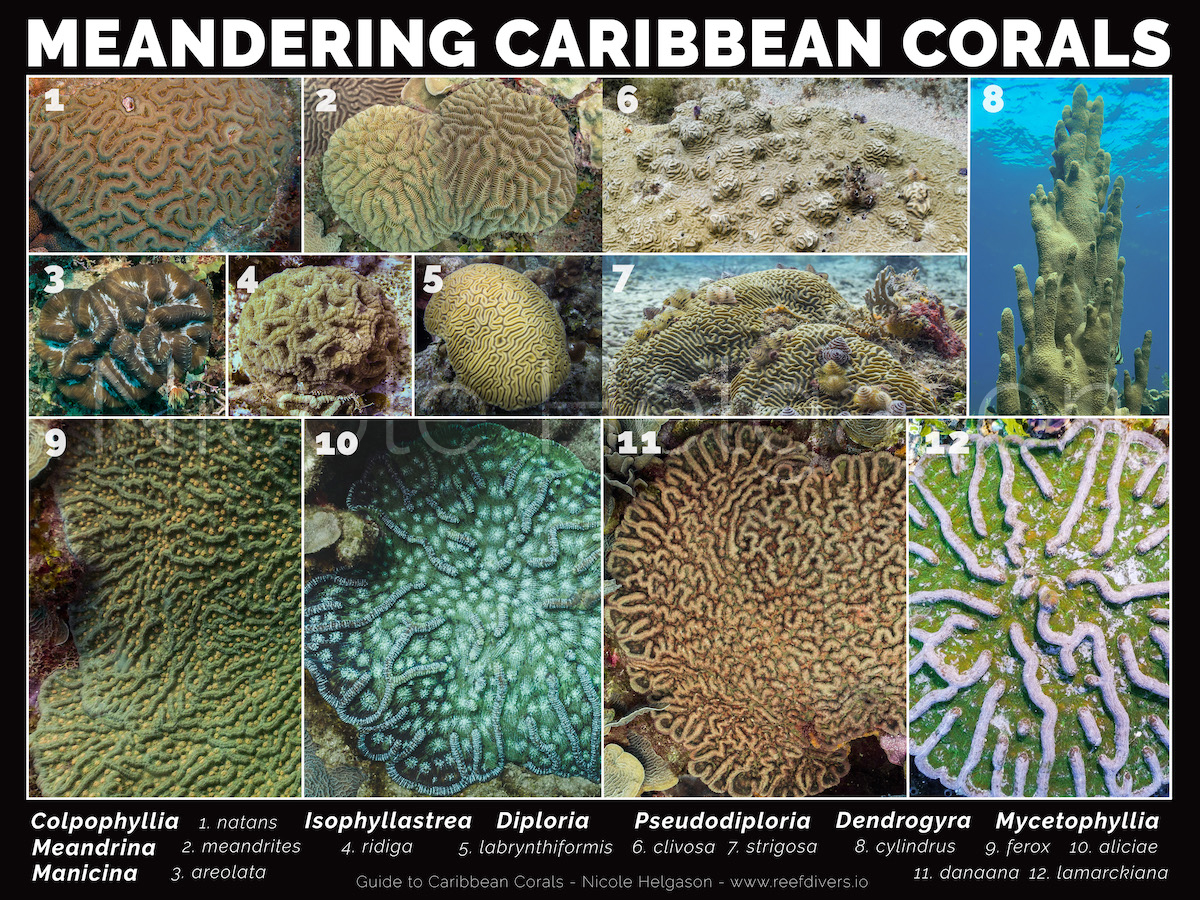 Coral Clamps are the first aquarium tongs with three 'claws'