Mesophotic, meet your new neighbor rariphotic. The deep sea Twilight Zone of coral reefs and some insanely beautiful fish has another zone names the rariphotic zone thanks to the Smithsonian Institute’s marine science team that has been studying these depths.

This rariphotic zone is considered anywhere between 130 to 309 meters (around 425 to 1,000 feet) below the surface. The Smithsonian team identified it while exploring the reefs alongside Curaçao during the Deep Reef Observation Project (DROP).

They observed over 4,500 fish that really looked more like shallow-water reef fish vs. deep-sea ocean fish. The seas around Curaçao provide an interest area to study as the Caribbean Island is separated from mainland South America by a deep ocean trench. In fact, the only for humans to get to this zone is through a submersible.

“About one in every five fish we’re finding in the rariphotic of the Caribbean is a new species,” explained co-author and Smithsonian marine biologist D. Ross Robertson, Ph.D. In fact, the team discovered 30 fish species that were just officially described in their study in Scientific Reports. These include a few of our favorites we’ve seen over the years:

Besides all the wonderful fish they’ve discovered, the team is key to point out the focus of the study was to identify and characterize the rariphotic zone itself. We’ve covered the first reef Twilight Zone the mesophotic reef zone explored extensively by scientists like the team at the California Academy of Science, which extends from 40 to 150 meters below the surface. There is a hypothesis that shallow-water fish, coral and other creatures are leaving the warmer waters, but there is still a lot to learn about both the mesophotic and rariphotic zones. 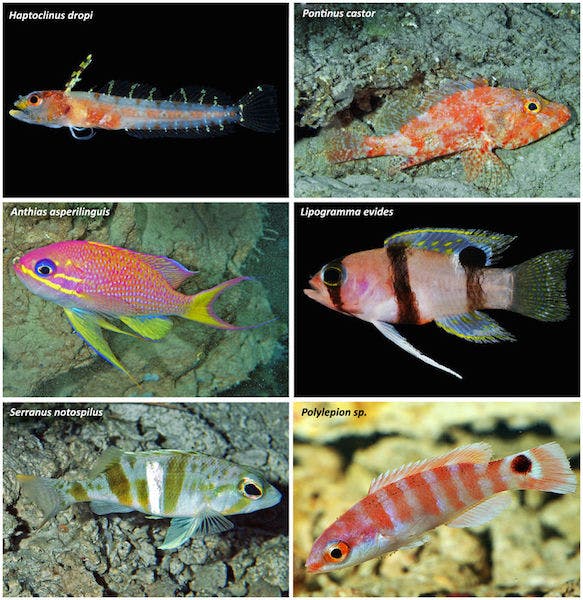 “Reef ecosystems just below the mesophotic are globally under-explored, and the conventional view based on the few studies that mention them was that mesophotic ecosystems transition directly into those of the deep sea,” said lead Carole Baldwin, Ph.D., author and curator of fishes at the Smithsonian’s National Museum of Natural History. “Our study reveals a previously unrecognized zone comprising reef vs. deep-sea fishes that links mesophotic and deep-sea ecosystems.”

The team was able to use the submersible’s robot arm to collect specimens for closer examination, using DNA analysis to identified new species. This also provided genome-level analysis to see if their evolution follows more along the lines of other shallow or deep reef fish.