How To Grow The Most INTENSE Purple Rim Monti Cap

The purple rim Leng Sy cap is one of the most desirable and recognizable coral strains in the hobby of SPS reef keeping. Like zebra plecos and peppermint angelfish, images of the purple rim cap have been plastered on the labels of reef aquarium products for years, only fueling the hype and demand for this iconic Montipora capricornis strain.

It was just a few short months ago, ok maybe six months, since I shared pictures of a rapidly growing frag of the purple rim Leng Sy cap. After just under a year in my reef tank total, I am thrilled to have succeeded a colony that is perfect in every way, shape, size, color and detail. 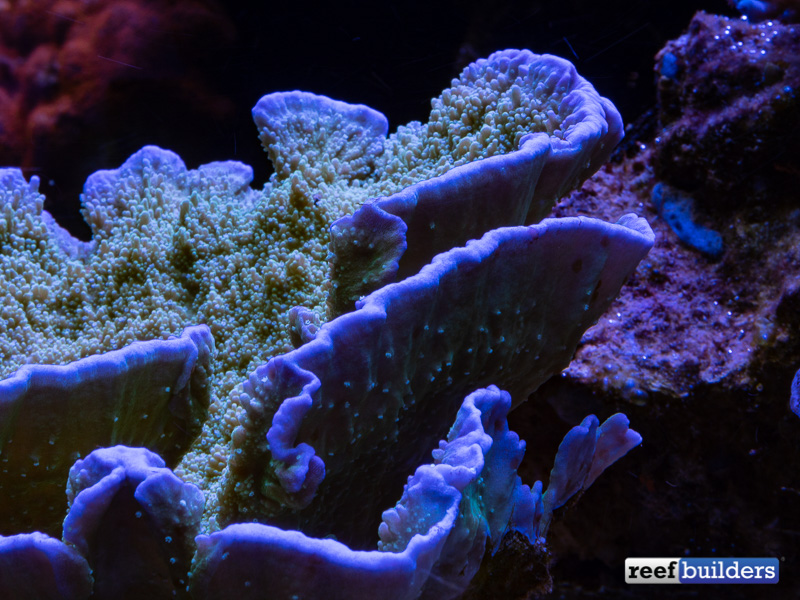 The most common question that veteran reef keepers get from new and intermediate reef hobbyists is how to grow corals fast and colorful. The general answer for most species is always to try and keep the healthiest corals possible, and plating Montipora are among some of the easiest SPS corals to keep and grow.

However there are some tips and tricks to help you grow a nice purple rim Leng Sy cap that looks just ‘like the pictures’. These Montipora pro-tips include keeping a high magnesium level, regularly adding the right trace elements, and providing the corals with suitable light intensity as well as color. 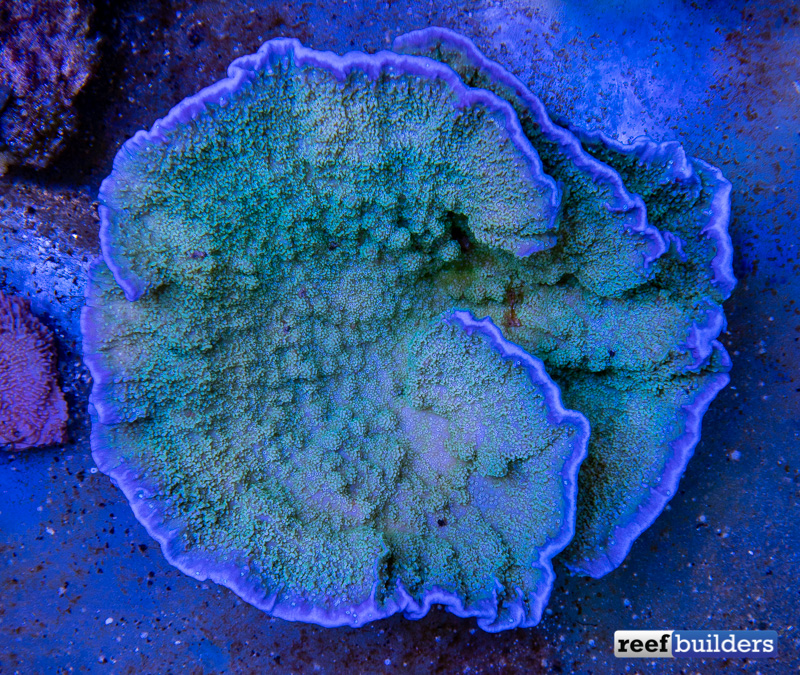 Years ago I noticed that my SPS tanks tended to grow Acropora and Stylophora really well, but the Monti frags I kept would look great while not really growing all that fast. At the time I kept my magnesium levels at a very reasonable 1300 to 1350 ppm but it wasn’t until I started keeping Magnesium really high at 1450+ ppm that I really saw lush, thriving Montipora in these mixed SPS reef tanks.

I’ve since noticed Montis thriving the most in reef tanks with elevated Magnesium, and in some cases have ‘diagnosed’ low Magnesium levels in several reef tanks just by looking at the Montipora colonies. 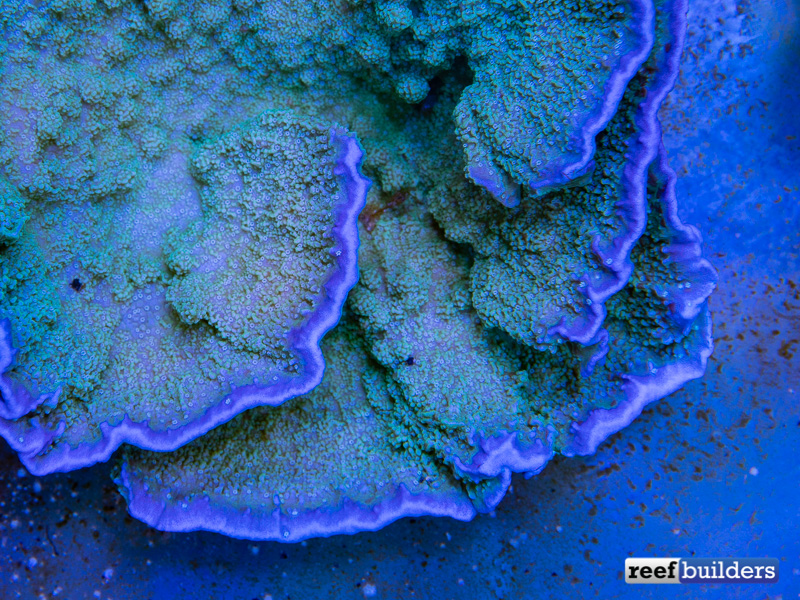 It’s now natural for reefers to have a good handle on managing mineral balance of Calcium, Alkalinity and Magnesium but another ingredient that really helps to make Montis as bright and healthy as possible is the regular addition of trace elements. If you feed a lot or do a lot of water changes you might get away with minimal extra traces.

But in a crowded reef tank with lots of fast growing corals scavenging every little bit of Strontium, iodine, zinc etc. the regular addition of these will go great lengths to stimulating abundant and vibrant pigments in aquarium corals. You don’t have to go all in with the balling method and dosing dozens of separate elements either – I like to use a broad spectrum trace element additive such as Brightwell Replenish to cover most of it, and I am a firm believer in the power of AcroPower as a source of Amino Acids. 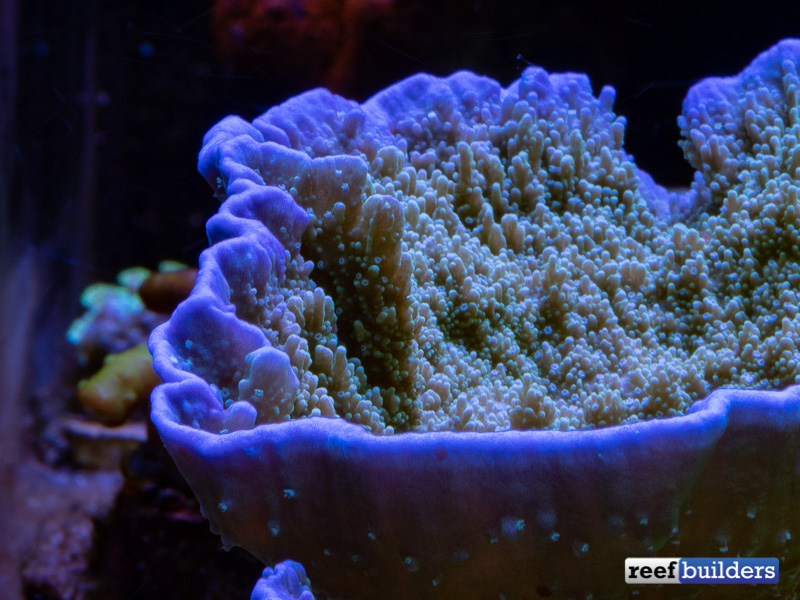 As previously mentioned you can absolutely grow this strain easily in just about any decent light down to a PAR of 100 umols, but if you want to grow a Leng Sy cap with nice sloping walls, a bright purple rim and nice nodule development you’re going to need bright lights.

To really get that rich detail and character you’ll really want to aim for a minimum PAR of 400 umols, with 600 umols being the sweet spot. If you give it much brighter light up to 1000 umols this coral will grow so vertical that it won’t really scroll and it’ll look neat, but very very gnarly, and will sometimes even grow downwards!

Last but not least, we are all addicted to blue lights these days but the purple rim of the Leng Sy cap really looks brightest and most vivid under warm lighting. This is both to stimulate the nice, thick colored rim of the coral, but also simply to render that particular pigment vividly. In the video clip above you can see how unreal the purple rim of this Leng Sy cap is under warmer spectrum and this kind of highlighting applies to all pink pigments like those of Pocillopora, Seriatopora, Stylophora and even pink Nephthea.

After all of these years of growing caps the Leng Sy colony I have now is by far the nicest I’ve ever personally grown. I want to thank Sanjay for letting me harvest a frag from his tank last year, and especially the long procession of reefers all over the country who helped keep this historical strain alive in the reef aquarium hobby for nearly 20 years! 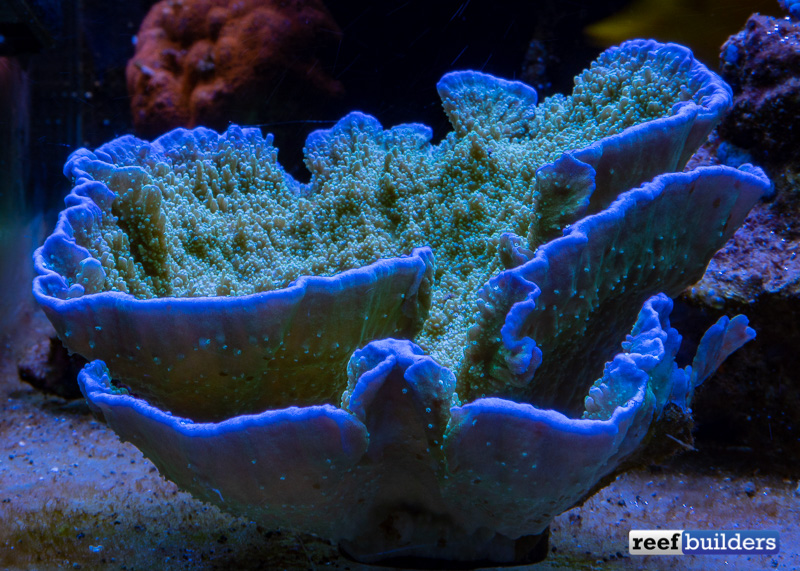 Aquarium Makeover of a Red Sea Max at Nature Aquariums