Acropora Thrive In The Shallow Reefs Around Halmahera Indonesia

We’ve just spent a week diving in the northern province of Maluku Indonesia around the island of Halmahera, and to say we found our Acropora dream reef is an understatement. We visited this region as part of the Polyp Lab coral spotting expedition and have saved same some of the best looking reefs for last.

You can check out our first two articles to learn more about Weda Bay and the Island of Halmahera, and some of the Colossal Coral Colonies we spotted on this trip.

By day three of the expedition, our infectious excitement about corals was starting to rub off. The dive guides were prepared to find us the best coral reefs Weda had to offer. We heading out to the south of Weda bay to Elmoos Atoll Reef.

As we arrived to the reef, low tide was approaching and out of the blue, we spotted the tell-tale signs of a shallow coral reef, turquoise hues appearing from the deep blue sea. Our boat reached the side of the reef and we could see down over 40 feet, the water was crystal clear.

Elmoos reef is massive, in the picture above you can see our boat, the little white dot in the bottom left corner of the Atoll. The outside of the Atoll consists of steep walls down past 100 feet, and we spend some time exploring the wall before heading to the reef crest.

See also  Colonial tunicates are cool but should be avoided

Looking from the top of the reef outwards toward the wall was a healthy mix of hard and soft corals, all competing for space. You would be hard-pressed to find a bare space along the reef crest between 25 and 10 feet deep. But what really caught our eye was the reef top full of Acropora corals.

Acropora corals thrive in the shallow reefs around Weda Indonesia, this video was taken on Elmoos Atoll Reef as part of the Polyplab Coral Spotting Expedition.

The reef top at Elmoos was dense with corals with little open rock space, while the reef top at Loleo had noticeably more rocky real estate. Both reefs were an Acropora paradise, not a single broken coral branch in sight.

The Acropora seem to love soaking up the rays in this shallow platform. They sure don’t mind the high light, and because of daily tidal fluctuations, the reef top has a pretty steady flow of water to cool them down.

I was already impressed with Elmoos reef, but the following day the dive guides totally outdid themselves. Feeding off my excitement for the shallow Acropora paradise at Elmoos, they brought me to another reef called Loleo, and ooooh baby, this reef was like nothing I’ve ever seen. 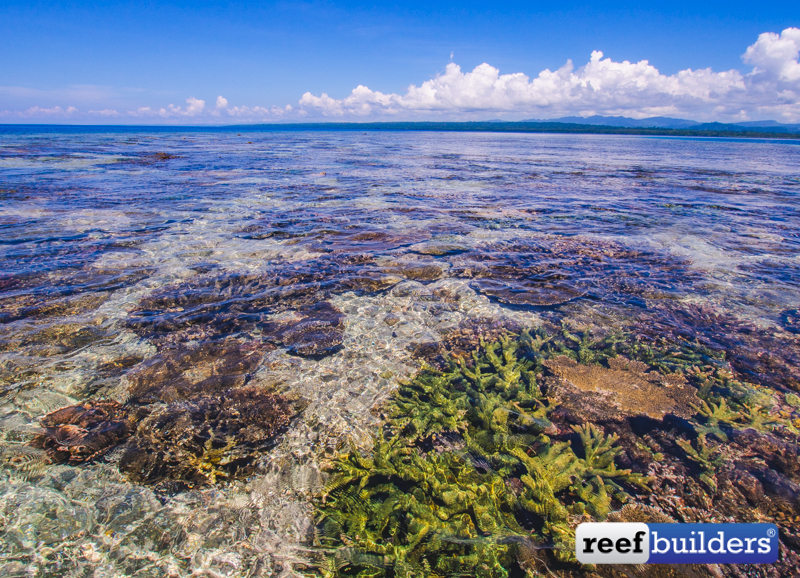 I tried approaching the edge of the reef until the corals were so shallow there was no getting past. After 30 minutes skirting around, I swam back to the boat, left my tank and fins, and got back in the water to photograph this amazing reef scape.

The robust Acropora corals on this reef top not only survive but thrive in this wave washed intertidal zone. Some of the older colonies in the shallowest parts of the reef even lack axial corallites on the tip of their center branches showing signs of repeated exposure to air, wind, and at times freshwater rain.

The dominant corals in this habitat where Acropora abrotanoides and Acropora robusta which are both available in the aquarium hobby. Perhaps take this shallow sun-drenched reef as a cue!

Give these corals lots of lights, lots of flow, and plenty of room to grow, and maybe one day you will have your own colossal colony!