Manado is a rapidly developing city in Northern Sulawesi. Shopping malls, and tourism development are encroaching further and further towards the sea, and not many people would expect to find world class diving a stone’s throw away from this metropolis.

But it’s here along the border the city where you find some of the most unique coral habitats of Northern Sulawesi. These sloaping reefs have a high coral diversity and last month we headed back to Northern Sulawesi sponsored by Polyp Lab to document these seldom visited reefs. 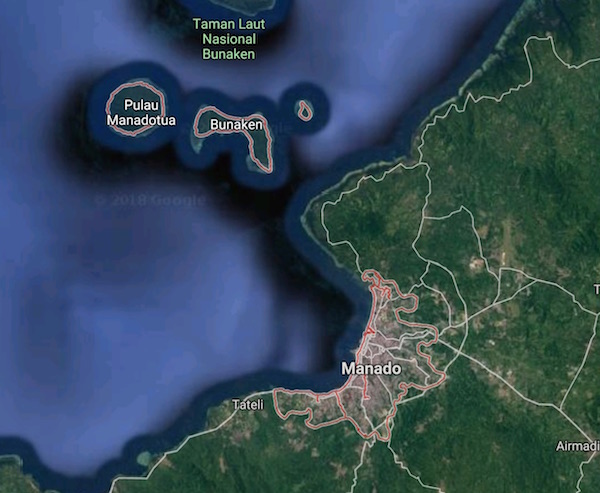 While we’ve named this article diving in Manado Bay, it should really be called diving the shores on Manado Bay. The center of the wide bay descends past 5250ft (1600m), far beyond the reach of divers.

Therefore, the only habitats accessible to recreational scuba diving are those along the shore and surrounding the Bunaken Park Islands. But this deep bay plays a critical roll is regulating and replenishing this coral reef habitat as it contains a tremendous volume of water.

The deep bay and presence of swift moving current in Manado Bay are a primary contributor to the high diversity of coral, exceptional health and size of coral colonies, and the reefs overall resilience to climate change.

My favorite site in Manado Bay is called Batas Kota, which means city border. The dive starts on a sandy flat where at least one hundred coral frames are planted in neat and tidy rows. To the west just past the sandy flat the natural reef emerges. From 23ft (7m) down to 65ft (20m), impressive stands of Acropora are mixed with other branching and plating corals.

You could easily spend an entire dive circles around a few hundred meters, peeking between layers of corals, and stumbling upon micro habitats. You can also find toadstool leathers strewn about sandy patches between the reef.

Even the most season corals spotting experts will be amazed at the diversity. Vincent Chalias spotted this rare Acropora multiacuta coral while diving at Batas Kota.

To the north of Batas Kota, either swimming underwater or 65-165 ft (20-50m) up the coast by boat you will find the Euphyllia dream reef. This reef is called Gorong Gorong by locals, meaning the big pipe. The reef starts at (16ft) 5m deep and only 65ft (20m) from shore when a large pipe empties rainwater and anything else washed off the streets into the sea.

This is truly the last place you would expect to find a such a unique coral habitat. But this is where the big bay and large volume of water really come into play. Where you would expect all the runoff and anthropogenic waste from the land to impact the reef and overall water quality, the constant recycling of water from the center of the bay toward the shore brings nutrients for the corals, and exports any of the waste which could pollute the reef.

Think of it like a big daily water change and periodic feeding cycles. It’s obvious to see why I call this dive Euphyllia dreams. Huge colonies of Euphyllia stretch far down the coast. We swam for 65 minutes in the same direction and never reach the end.

Wow! Already blown away by the diving in Sulawesi. Check out this never ending field of Euphyllia just 5 minutes from our hotel!Day one of our first ReefBuilders destination dive trip in the books. https://reefbuilders.com/reef-builders-destination-sulawesi/

Some of you may remember last year when I posted this video of the Euphyllia reef in Manado. The video quickly went viral on the ReefBuilders Facebook page, while the dive staff in Manado, with decades of experience, were stunned to see such a response from a coral they barely knew existed five minutes from the hotel.

Euphyllia coral is something aquarists would be able to identify in a heartbeat, but the word alone ‘Euphyllia’ would sound absolutely foreign to a scuba diver.  This is a must see reef for any coral spotting diving aquarist who visit Sulawesi!! 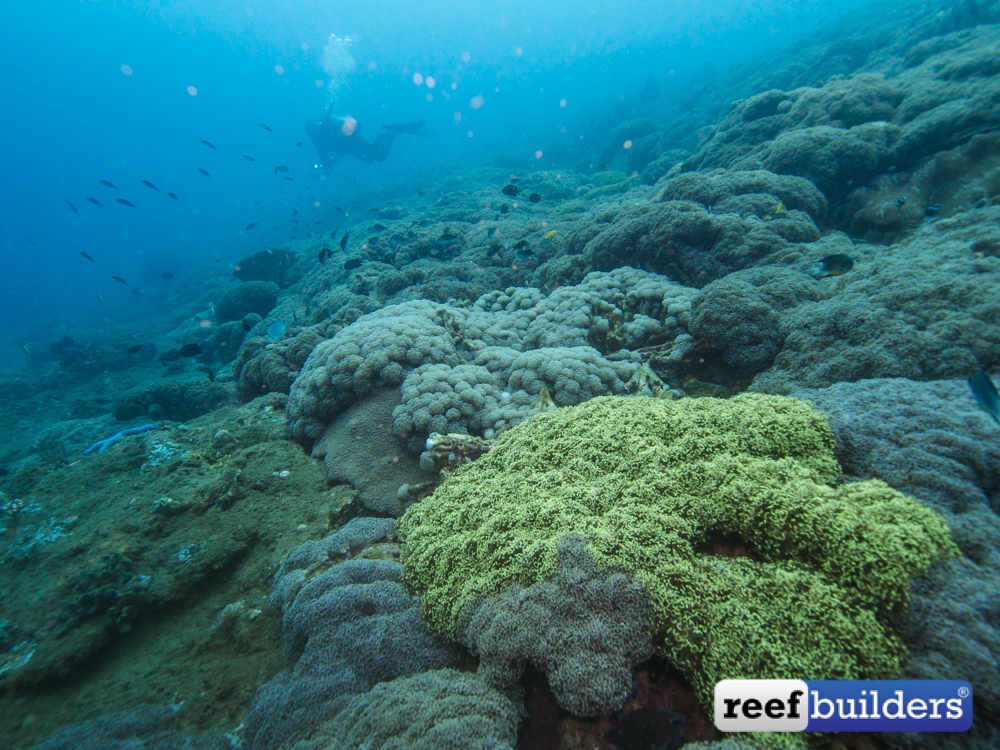 In the eastern end of the bay you find two more dive sites named Cirrcus. At the Cirrcus dive site you will find a large stand of bottle brush Acroporas.  The term bottle brush refers to the shape or growth form of Acropora corals which have a thick branch and closely spaced long tubular corallites.

At first, you will see a few thick clusters, along with some big Turbinaria and scrolling Echinopora colonies, but as you keep swimming, you will be amazed by the number of corals in this large stand.

There are several different species of Acropora that form this bottle brush branch shape, but the species at Circus is called Acropora turaki. This species is characterized by the long tube-like corallites and upright main branches that form into clumps.

If you look closely you will notice at least three different colors of this same species all living in the same area. We found reddish brown, green, and purple. You can tell they are the same species as they are living so close together without conflict. Thanks to Vincent Chalias for the awesome macro shots of these corals from Circus.

The shores of Manado Bay have a diverse range of coral habitats which will impress even the most experience coral spotters. Make sure you take time to visit at least one of these dive sites on your trip to Northern Sulawesi.

Next week we will be talking about the coral wall habitats around the Bunaken National Park. We want to thanks Murex Dive Resorts for showing us around Sulawesi and Polyp Lab for people a part of this expedition.