Tosanoides annepatrice is the newest member of this colorful deepwater genus of anthias that come hardly a week on the heels of another new inductee, Tosanoides aphrodite. But where that species was a huge surprise due to being found in the Atlantic, the freshly described Tosanoides annepatrice comes from more familiar deep waters of the Federated States of Micronesia.

If the sensational appearance of the Aphrodite anthias cast a long shadow then the AnnePatrice anthias is more than capable of living up to Tosanoides‘ reputation for fish with crazy colors and ostentatious patterns. The female T. annepatrice is a ‘normal’ looking yellow and pink anthias – yellow body, pink face markings and large pink ventral fins.

But the male Tosanoides annepatrice really takes the the color pattern game to the next level; the body color is mostly a flat smooth orange with a deeper red stripe just below the midline. But then the head and fins are boldly marked with broad yellow stripes that are contrasted by equally potent pink to fuschia stripes – this is one very colorful fish!

As you might expect, this exciting new fish lives in unobtainium territory with the original specimens being collected in waters between 115 & 148 meters, that’s 375 to 485 feet deep. That being said, there is at least one live specimen currently on display at the California Academy of Sciences in San Francisco so it is possible to keep a fish like this alive and healthy, just getting to them is quite the obstacle.

Obtainable or not, it’s nice to see a steady progress of deep fish discoveries that include such exciting and inspiring fish as these newly discovered AnnePatrice anthias. Tosanoides annepatrice is described by familiar fish fanatics Pyle, Greene, Copus & Randall in the recent edition of ZooKeys. 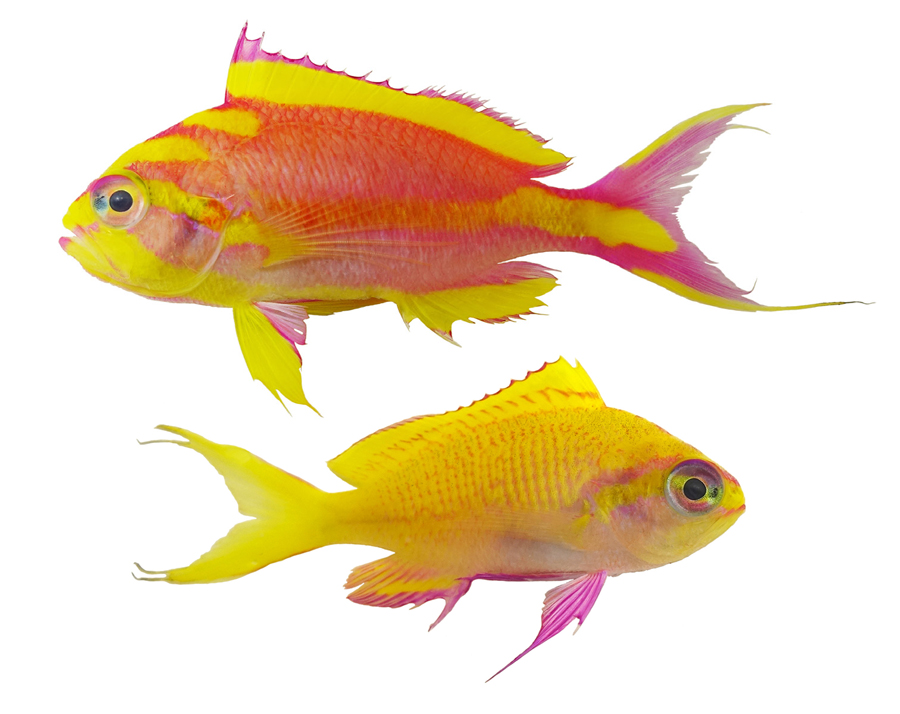 The Ultimate 'Rainbow Reef' is at VP Corals in Taipei, Taiwan

Pavona duerdeni is your Weird Coral of the Week