The Mystery of Clown Triggerfish with ‘Rings’

Besides clownfish, the clown triggerfish is perhaps one of the most iconic and recognizable ambassadors of tropical marine fish. One of the reasons for this is that no other fish looks like the clown trigger, and like moorish idols, they are supernaturally consistent in their color and appearance across a very wide natural range.

It’s this consistency that has baffled me for many years, because for a fish as common and widespread as the clown triggerfish you expect it to show more aberrations from time to time. There is only one ‘variant’ of the clown triggerfish that has been pictured on several occasions, and it is a development of the large white spots into large white rings with black centers.

He bites but he is very nice with the shrimp because the shrimp cleans him.

This mystery is one that I’ve personally investigated ever since the first time I saw a picture of a ‘ringed’ clown triggerfish. While I always scan the imports of fresh clown triggerfish, I’ve never seen a wild clown triggerfish display the rings, although I have seen one large adult specimen displaying this feature at a public aquarium. 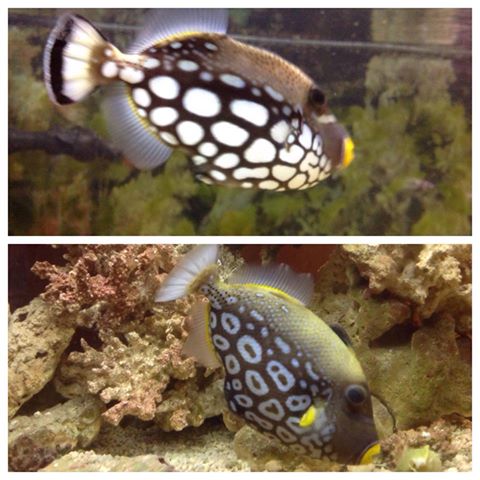 But recently we received a message from Soge Cheng, an aquarist with a clown triggerfish that developed this pattern under his care. Mr. Cheng obtained his clown triggerfish as a normally patterned specimen more than five years ago and over time the spots broke up into rings and figure eights and now looks like the mystery triggerfish morph that we’ve been fascinated by all these years.

Despite inspecting thousands of freshly collected clown triggerfish over many years, and even large adults in the wild while diving, we never even saw a hint of an aberration. While the mystery is far from solved, now at least we know that the ringed pattern can develop from normal specimens but what causes this development in a select number of clown triggers is the next step of this riddle.

External Pumps Still are Untouchable When it Comes to Pressure