Chrysiptera uswanasi is yet another new species of damselfish from the island of Papua, Indonesia. Uswana’s damselfish is the seventh member of the very similar looking cluster of species in the C. oxycephala complex.

Other recently described damselfish from the Oxycephala group include C. papuensis, C. ellenae & C. maurineae from the East Indies and C. burtjonesi from the Solomon Islands. The differences between these closely related species gets harder and harder to distinguish with these so-called ‘cryptic species’ so genetic analysis is required to differentiate them. 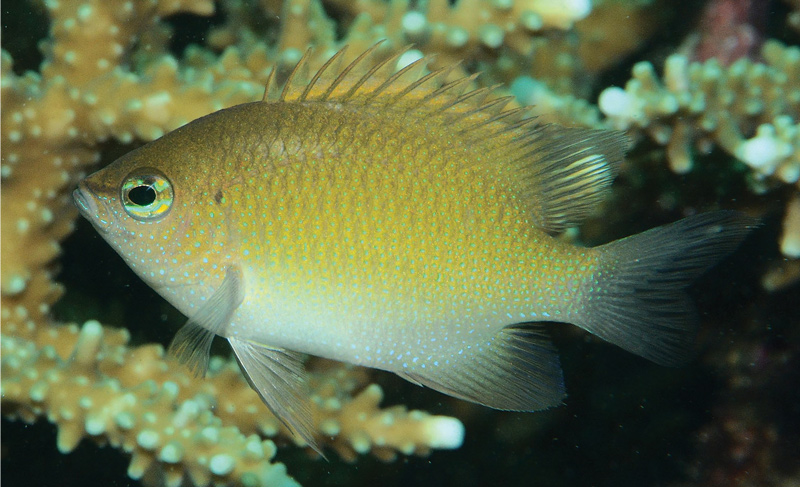 The difference in coloration of Chrysiptera uswanasi and the other damselfish is mostly visible in the juveniles. In Uswana’s dmaselfish the juvenile coloration is a blue green overall with solid color on the face, head and dorsal region while the flanks are colored in numerous small bluish green spots.

But as an adult the freshly minted C. uswanasi is the ‘least yellow’ and ‘least blue’ of the oxycephala species being mostly green overall. It mostly resembles Chrysiptera ellenae also from West Papua, but found in the Raja Ampat region while C. uswanasi is so far only known from the Fakfak Peninsula & nearby Triton Bay.

Chrysiptera uswanasi is described by Allen, Erdmann & Cahyani in the latest issue of the Journal of the Ocean Science Foundation.

Nudis and slugs get a second edition

White Corals has an Incredible Display of Livestock Too!