The new Great White skimmers from Dalua Australia are sleeper powerhouse of protein removal and organic export. It’s easy to look at their unassuming size and judge their unremarkable appearance as just another protein skimmer company, but these fractionators definitely swing above their weight class.

On the outside it’s a very familiar assemblage of shapes and parts – conical skimmer body and neck, compression fitting cup, ‘pipeless’ gate valve and an included air silencer. The one design feature that is unlike anything we’ve seen on another skimmer is the unusual bubble diffuser plate which has a row of outlet holes on the perimeter of the disk, instead of just the top.

How much this helps in overall protein removal is debatable, but the mixture of air and water inside is definitely one of great mixing with a minimum of turbulence. The real ace up the sleeve of Dalua’s Great White protein skimmer series is the engine of froth provided by the Eden needle wheel pump.

This is the same motor family used in the highly respected Nyos protein skimmers, but with a more off-the-shelf needle wheel, volute and aspirator (venturi) valve. The power and high RPM of the Eden and Viper pumps creates a very strong negative pressure to draw in air and the high speed really chops the air into the finest cloud of air and water.

Where the Great White really stands out from the Nyos, and really many other skimmers in this category is value – these things are ‘suspiciously’ low priced even though they are made in Taiwan, not China, and the pumps are European being made in Italy. The Great White 5 starts at $329 and can rock a hundred gallons of reef water, while the GW10 which we are using on the 170 gallons of the Red Sea Reefer Peninsula costs $399 and we can’t imagine wanting anything bigger.

Of course with this low cost comes some trade offs, the pump and diffuser plate are unattached, which just kind of feels wrong, but doesn’t seem to affect performance or operation. The gate valve is woefully undersized for the pump & body size, it’s loose and takes some tinkering to dial in the proper water level inside the skimmer body. 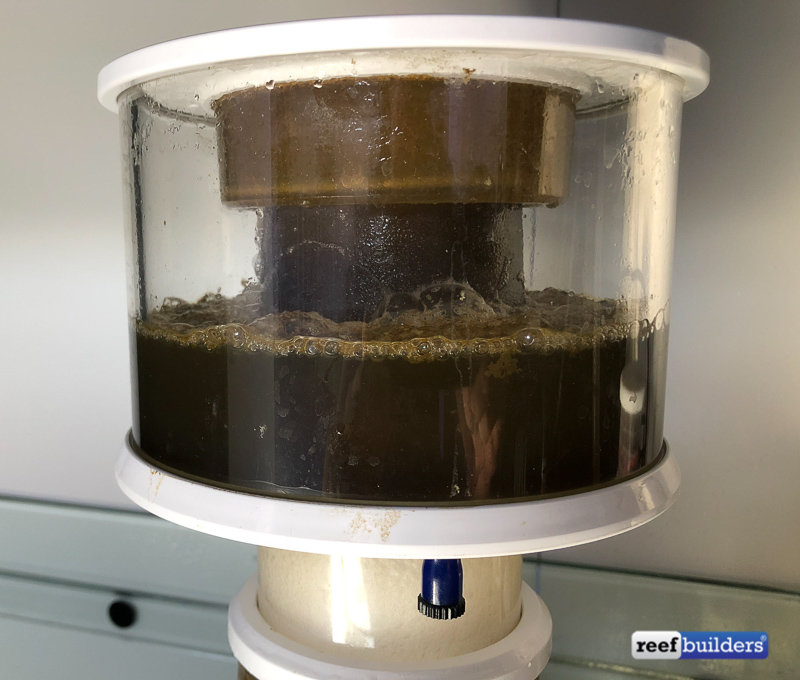 The collection cup is also quite small relative to how much this skimmer takes out but that’s a pretty good problem to have, and adding a drain isn’t too hard to do. Finally, the air silencer included with the Great White skimmer is borderline embarrassing, smaller than a film canister, and barely muffles the sound when the air is restricted, and even less effective at higher air intakes.

OK so the bells and whistles have room for improvement but at the heart of it the Great White is simply a beast when it comes to producing dark, nasty, gag-inducing skimmate. We really approached the review of the Dalua GW10 with modest expectations for the size and price of the Great White skimmers, and breaking it in took longer than expected. But now that we’ve developed a feel for how this skimmer behaves, it produces a consistent full cap of brown goo several times per week, which is precisely what it was installed to do.

Master of all UCA Homophyllia bowerbanki, is the ultimum LPS coral