Cove protein skimmers are a unique breed of acrylic aquarium products from China which stand apart from other equipment manufacturers in a number of ways. The brand has been making inroads to international markets around the world and it’s only a matter of time until American reefers see the value of Cove’s creative approach to aquarium equipment design.

If you’ve been to the trade shows, especially international ones, or perused online market places, it can be quite confusing to see so many protein skimmers being sold with virtually identical bodies, designs, and pumps. When you see a Cove protein skimmer the design is certainly familiar, but if look closely at all you’ll notice a certain originality to how Cove skimmers are built.

The biggest thing that stands out about Cove skimmers is just how robust they are – even with a single piece molded design the acrylic of the body is so thick, when you pick one up you know there’s a significant amount of material there. Furthermore, every aspect of the construction is a little overbuilt – big cup, big neck, big outflow pipe, and we particularly appreciate that substantial bubble diffuser plate.

It might not be a measure of its skimming performance but in a drop test, we would place our bet on the Cove skimmer surviving longer than any other skimmer. Besides the sherman tank build we appreciate the attention to other design fundamentals such as a classic highly perforated bubble diffuser plate with no gimmicks, a now standard hourglass style conical body and a good old fashioned wedge pipe to control the outflow.

Some other very welcome design perks include small practical details such as an intake strainer on the pump, a triple seal neck, a large air silencer. It’s also important nowadays to have a skimmer that completely disassembles for cleaning and maintenance, and Cove goes a step further by using a soft Uniseal style joint for the outlet pipe so you can get a good clean on that too. 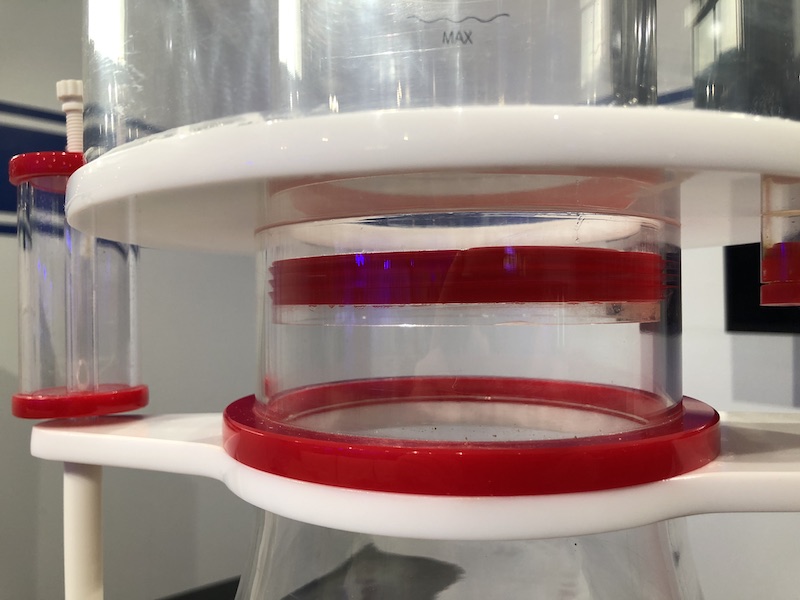 It goes without saying that Cove really went out of their way to create the perfect protein skimmer body to serves as a foundation for one of the best aquarium pumps,  AquaBee. Not only is AquaBee one of the oldest and longest lasting pump companies in the aquarium hobby, they also were one of, if not the first company to build a needle wheel pump for the patent holder Deltec – needless to say they know a thing or two about how to make a great aquarium pump, and especially needle wheel models.

Our first ever needle wheel protein skimmer was powered by an AquaBee pump and after years of using venturi skimmers, we’ll never forget seeing that big head of whip cream saltwater foam rise to the top. In recent years AquaBee has seen limited use in protein skimmers outside of Europe but Cove skimmers are completely designed around the AquaBee line of needle wheel pumps. 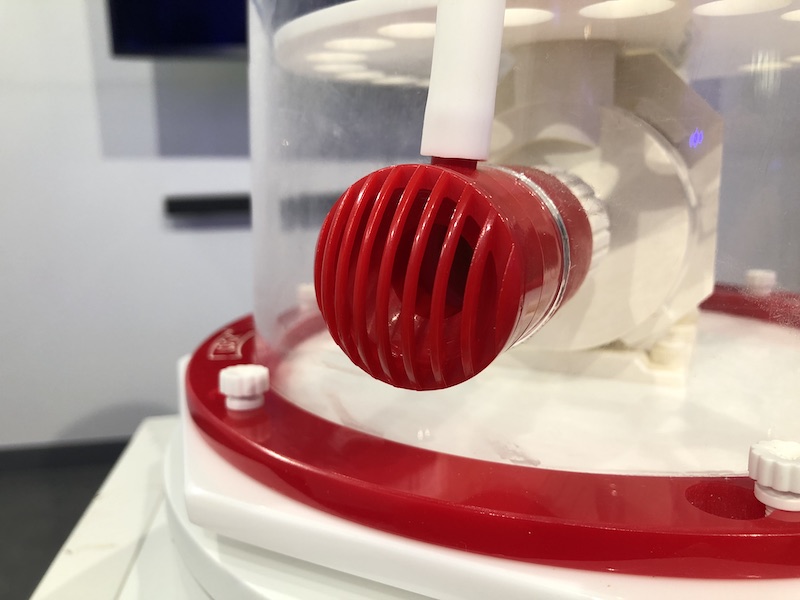 All of AquaBee’s pumps for circulation or foam production are created and built with longevity and durability in mind, and the benefit of three decades and two human generations of refinements. One of the Cove skimmer and AquaBee pump matchups that best exemplify the ethos of both companies is the Cove I-250 protein skimmer using an AquaBee UP5000 DC.

The UP5000 DC is currently AquaBee’s ‘smallest’ controllable needle wheel pump but that doesn’t mean it’s a slouch by any means. This pump uses a brushless DC motor for maximum efficiency resulting in both quiet and cool operation; this last part is often overlooked and easy to misunderstand but especially important in mineral-rich reef tanks wherein calcium carbonate loves to precipitate on hot equipment such as heaters and inefficient pumps. 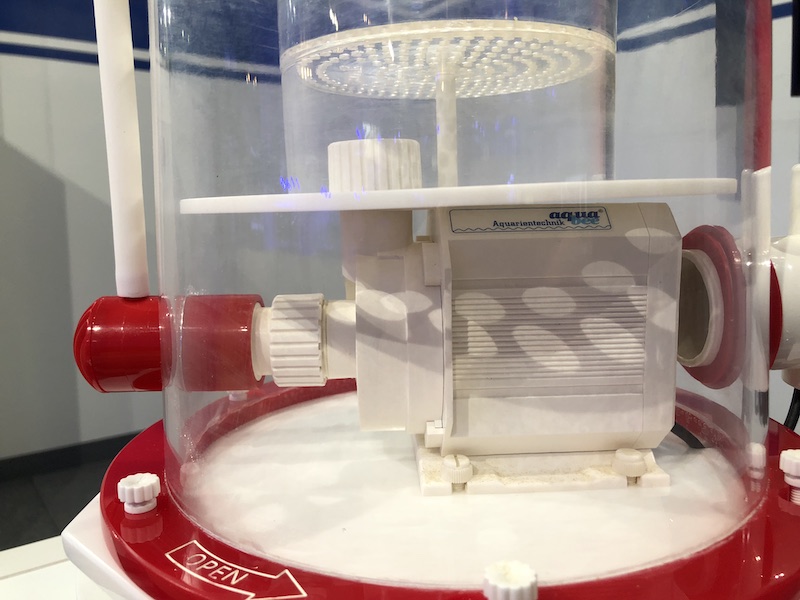 During normal water-only operation the UP5000 draws 30 watts while pushing 5,000 liters per hour of water – but using the finely tuned needle wheel and air intake valve allows the AquaBee UP5000 to draw up to 1,600 liters of air per hour while sipping on a paltry 15 watts! To put this into perspective, the best offerings from Royal Exclusiv use almost 50% more power to reach this air intake and many of the reef hobby’s best skimmers might use two pumps and double the power to achieve a similar volume of air.

There’s been a a trend towards pairing high capacity pumps with small bodies to save space and cost and while these models to perform, they can be quite hard to dial in – often times it’s a fine line between running too low and overskimming. The easiest solution to this imbalance between pump and skimmer is to throttle back the air, making the pump work harder and negating the potential of the pump in the first place. 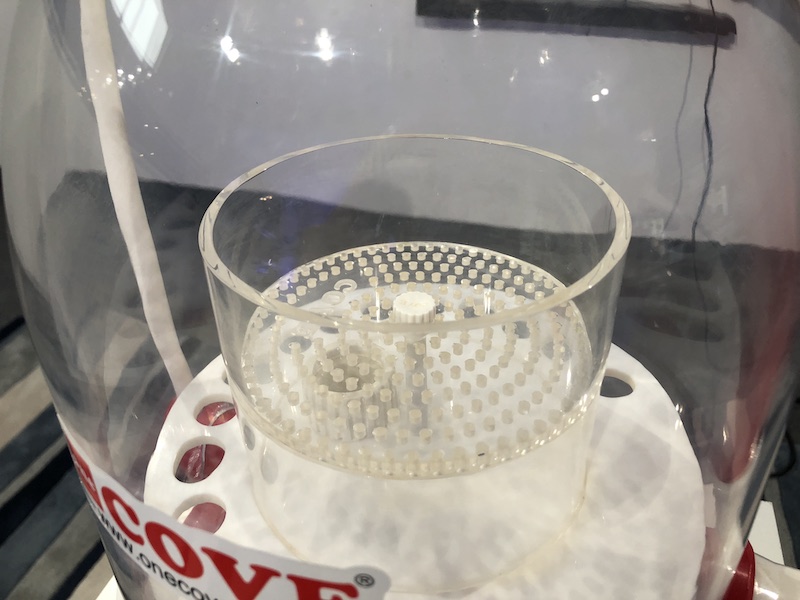 The Cove I-250 together with the AquaBee UP5000 DC strike a balance between pump air intake & foam production and body size. The 24 inch height and 15 inch diameter at the base of the skimmer body affords plenty of time for bubbles to ‘dwell’ for optimum protein skimming performance. On the surface the $1099 suggested price of the Cove I-250 appears pricey compared to similarly sized protein skimmers but we actually trust the 400 to 600 gallon rating of this skimmer.

We’ve been using the Cove I-250 on a 400 gallon moderately stocked system of aquariums at the Reef Builders Studio for most of this year and it has been one of the easiest, quietest skimmers we have in operation. We are dosing a lot of minerals on our various tanks and while some of the other hotter-running needle wheel pumps have already required acid baths to remove calcium buildup, the AquaBee UP5000 DC is still as quiet as the day we first fired it up. 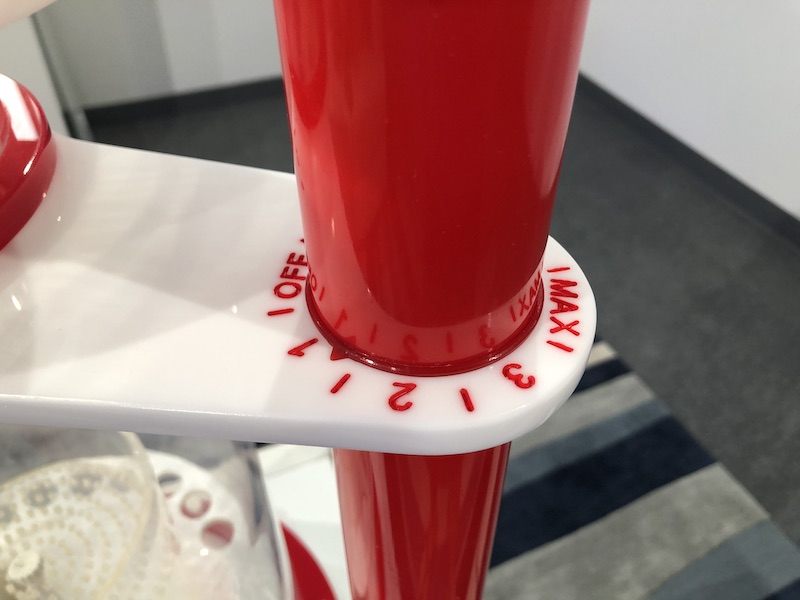 The large collection cup has ample room to hold the copious skimmate that the Cove I-250 produces and that triple-seal neck is a breeze to remove and put back for cleaning. Also, as an old school reefer, using that large wedge pipe to dial in the water level is intuitive and second nature and has needed much less fussing than other skimmers we’ve used recently.

In a time when most manufacturers are looking to new designs for protein skimmers to reduce cost, shrink the footprint or otherwise stand out, the Cove skimmers appeal to the protein skimmer purist in us. It might not be flashy but the reliable skimming fundamentals built in to the Cove line of protein skimmers are timeless and represent one of the best investments you can make in a long lasting protein skimmer. [Cove] 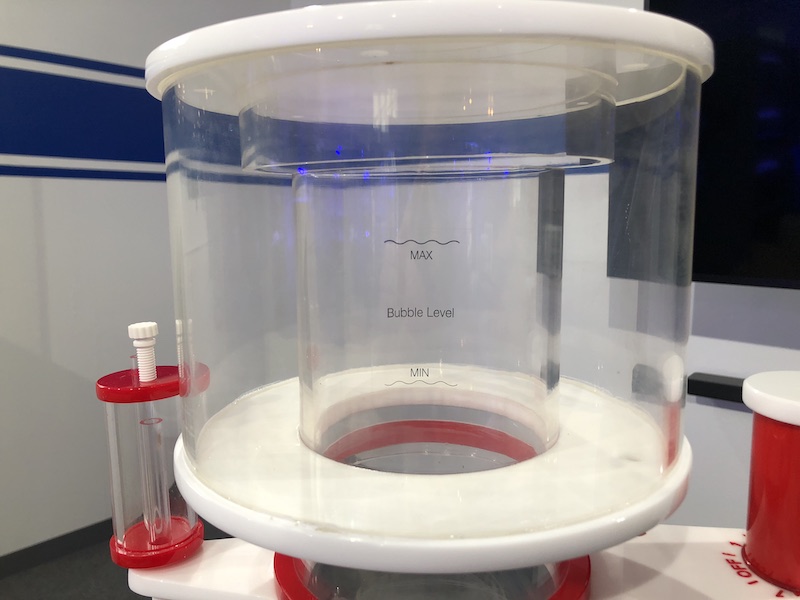 May 7, 2019
Site Sponsors
Reef Builders is Supported by: