Discovering coral eating pests and parasites is never fun and every major group of coral has something that eats them. Dealing with them can be challenging depending on the group but one guiding principle of dealing with them is that the pest is very host-specific, and we don’t expect to see Acro red bugs on shrooms.

This is especially true when trying to eradicate Montipora eating nudibranch of which we experienced a small outbreak later last year. A weekly inspection of the Montipora colonies, sometime followed up by removal using a Waterpik really helped to get rid of this unwelcome pest, or so we thought. 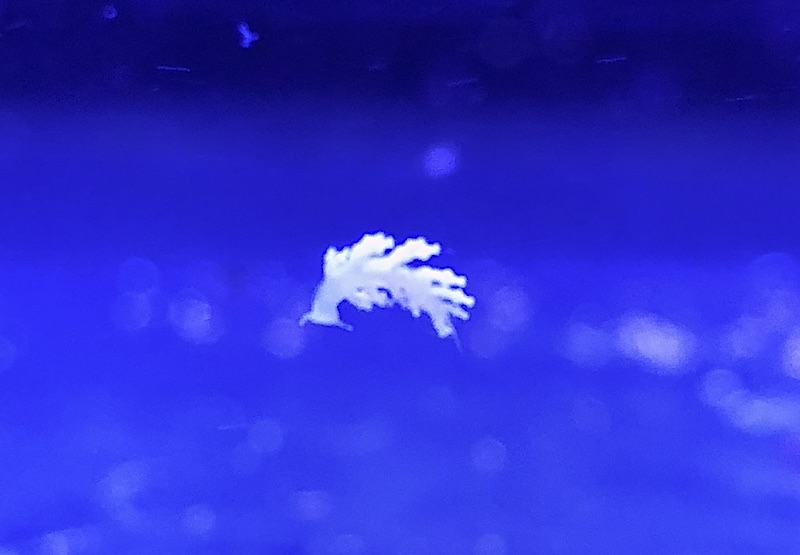 This past weekend while performing a deep clean of the Xmas Tree worm colony aquarium we discovered an unpleasant but enlightening surprise – we found Monti eating Nudis on the worm-hosting Porites! Only two of the four Porites colonies had any of the Montipora nudibranch but even then, they weren’t consuming the Porites the same way we’d expect them to devour Montipora.

Several young adult Nudibranch were found on the Porites, as well as one fresh mass of eggs. If we had to guess at what’s going on here, it’s possible that in desperation that larger Nudis can live from grazing the massive Porites but we don’t think the Nudis were able to close the life cycle on this different host.

Interestingly, after checking all the Montipora still in the aquarium system we didn’t find a single nudibranch so the Porites was more of a desperate bid to survive. The take home message is that if you’re dealing with Montipora eating nudibranch, you might want to check similar corals like Porites and even Anacropora for any lingering specimens of this undesirable coral pest.

May 7, 2019
Site Sponsors
Reef Builders is Supported by: