The RedSea ReefLED is exactly the kind of practical reef aquarium light we expect from Red Sea, and hands down one of the best first generation lighting products we’ve ever reviewed. Since this is such an important release and their first product to use wireless control and programming through their ReefBeat mobile app, it was paramount for Red Sea to get this right.

We therefore took a little extra time to review the Red Sea ReefLED and went out of our way to compare notes, solicit feedback from early users, chat with other reefers, and make sure we evaluated the ReefLED from every possible angle. Where some manufacturers might try to ‘conquer the mountain’ from one particular aspect, be it the brightest, smallest, cheapest, most colorful or the easiest to use, everything about the Red Sea ReefLED is a very reasonable balance of performance and practicality without making too many compromises along the way.

The experience of reviewing the Red Sea ReefLED starts with a very thought out packaging that is packed with pertinent information presented in an easily digestible way. At a glance you can easily learn that the ReefLED is wirelessly controllable with the ReefBeat app, is compatible with a variety of mounting options, and if you’re familiar with PAR values, the relationship between brightness and distance from the light.

Perhaps the most underwhelming part of the ReefLED is the enclosure itself, it’s a boxy design which appears a little on the chunky side. This criticism is only compared to contemporary lights on the market today, but by no means should it be a deal breaker and no one really spends much time looking at the light fixture itself, mostly the light that it gives off.

In Red Sea’s defense a large fraction of the ReefLED’s physical volume is occupied by a very substantial heatsink which should have no problems keeping the LED chips running very cool, even in the hottest of environments. As an added bonus one thing that Red Sea designed with the ReefLED is an easily removable fan and heatsink guard which will make the regular cleaning of the heatsink fins a very simple maintenance task, this is especially important in dusty environments or homes with pets that shed a lot.

From their beginnings, most ‘Reef’ capable LED aquarium lights have aimed to reproduce a wide color spectrum ranging from the whitest to the bluest color spectrums. This is preferable for producing a range of light in a ‘natural’ spectrum but it’s no secret that a majority of reef keepers have taken the blue pill, mostly employing a windex-blue spectrum which makes coral fluorescence really pop.

With this in mind, the first place you’ll notice that Red Sea took a unique direction in the design of the ReefLED is the interesting configuration they developed for their multichip LED. Since most reefers are running their reef lights with a strong blue spectrum, Red Sea’s decision to distribute the power across the white and blue color channels reflects these modern preferences. 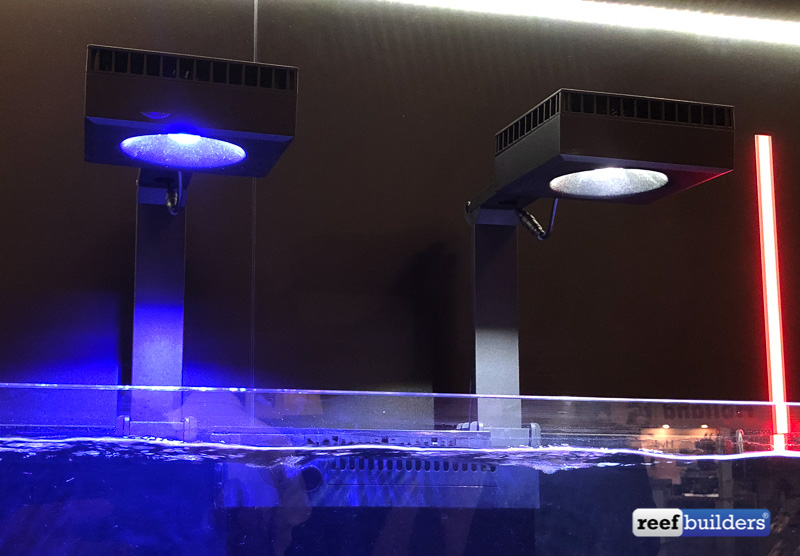 10 watts of the Red Sea ReefLED’s power is allocated to the 8,000K white channel and the remaining 80 watts is dedicated to a range of blue diodes with peaks in the near UV and deep blue wavelengths, and there’s a pair of ornamental LEDs specifically for moonlight viewing. For a generation of reefers used to having 5, 6, 8 or more color channels, it will be at once limiting to only have one channel for each of the white and blue colors, and also a little refreshing since this is the balance that really matters.

We can’t talk about the Red Sea ReefLED with its special multichip recipe and design, without mentioning the most comparable multichip light on the market, and for many reefers the champion of coral colors, the Kessil A360X. Kessil LED lights are the only other successful reef light that has only controls a gradient of blue to white light and we don’t see the ReefLED being handicapped by it either.

The images above show the Kessil A360x on full blue, full white, and a mixed spectrum over a 24″, 40 gallon cube with a variety of LPS corals which combined have most fluorescent colors that corals display. Below you can see the same sequence showing the blue, mixed and white spectrum from the Red Sea ReefLED, all images were shot using a smartphone and very light yellow filter for basic color correction.

The images are very representative of real life appearance with the Kessil A360X definitely looking better in all white, the Red Sea ReefLED looks brighter in the blue spectrum since it throws all its eggs in the blue basket. However, both the Kessil light and Red Sea’s ReefLED are very comparable when both the white and blue channels are both on full brightness, with the Kessil appearing like a standard blue, while the Red Sea ReefLED having a decidedly pink or purple hue that has been reported by many early adopters.

We took some quick measurements of the photosynthetically active radiation or PAR at twelve inches (30cm)  below the water surface with the lights mounted about six inches (15cm) above that. The Kessil measured around 100 umols of PAR directly underneath the light and around 80 umols all the way to one side, while the ReefLED registered 125 umols and 110 umols respectively.

This level of light intensity is more than enough for illuminating the most popular medium and low light corals but for higher light stony corals we’ll need to investigate more to see how the PAR values add up when several lights are used together. We’re going to put a single light through its paces for some time to feel it out but eventually our bigger, deeper and more light demanding Reefer Peninsula XL is destined to use a blanket of the Red Sea ReefLED.

By now you may have wondered how the ReefBeat app works, and the very fact that we saved it for last means that we have no major gripes or complaints about it. Everything about the app is pretty standard, connection was successful on the first try, and the one annoying part of the experience is having to sign up, register and answer a bunch of questions about your tank before you can actually dive in and control the ReefLED – this is of modest usefulness for walking newbies through their first LED light setup but a bottleneck for power users. 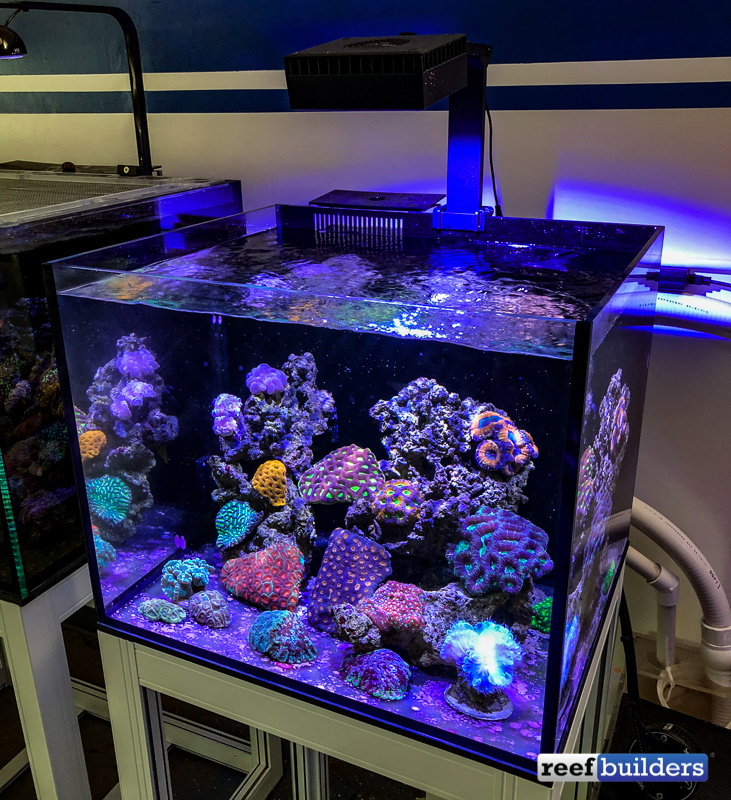 Red Sea took their sweet time releasing their very own LED light for reef aquariums, sitting on the sidelines for nearly a decade before really committing to the product category. This latent entry into the aquarium LED lighting market was for the best because Red Sea managed to tick all the boxes – color, control, programming, ease of use – while also managing to keep the light at a very reasonable $349. With this combination of features, performance and value, the Red Sea ReefLED easily becomes the LED spotlight to beat for small to medium sized aquariums and we’re confident that many reefers are going to really fall in love with it. [Red Sea]