before propeller pumps took over how we generate water movement in our reef tanks, the most cutting edge way to do this, especially in large tanks, was closed loops. Still used on some of the largest tanks, in conjunction with jumbo propeller pumps, closed loops have been relegated to a niche reefing technique, but we want to make them sexy again.

Avid followers of the Reef Builders Studio vlog YouTube series might recall when we simply placed our eight foot long, four hundred gallon tank earlier this year. Well here we are nine odd months later and we’ve taken a big step towards really beginning this tank build in earnest. The biggest and really the only obstacle has been enlarging the holes in the bottom of this tank, which came predrilled with four holes for one inch bulkheads. 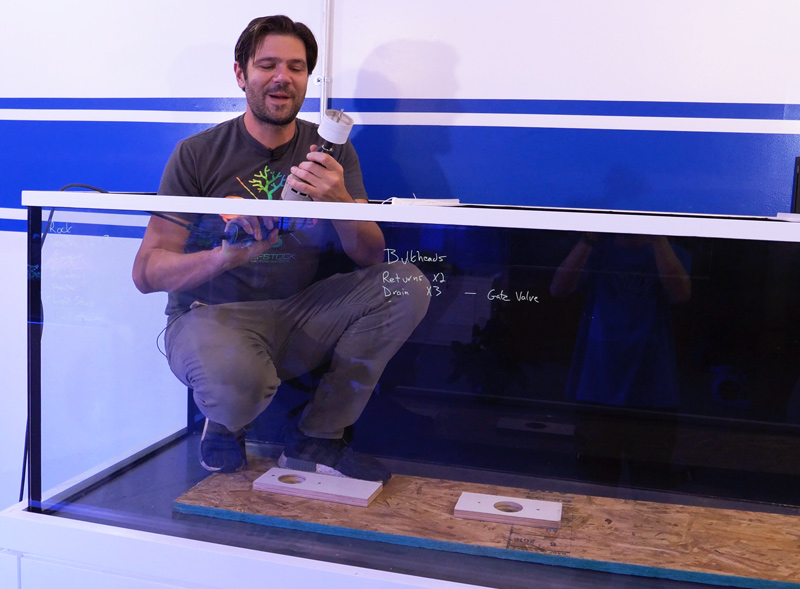 The challenge has been in making absolutely sure that the plumbing in the bottom of the four hundred gallon tank is flawless, which is challenging since we decided to use 1.5″ bulkheads for maximum flow rate in the future dual closed loop. It’s simple to drill a good straight hole in any material with the proper hole saw, it’s not so straightforward to enlarge an existing hole as there’s no material for the pilot bit to guide the machine.

Couple that with our inexperience in using a router, having only one shot to get it right, and we’ve basically had a mental block about simply starting and getting some momentum in the progress on this tank. Our recent diving on the Great Barrier Reef , and a shipment of hand picked Australian corals, which are doing great BTW, no doubt contributed to our motivation in getting this showpiece reef tank up and running.

It’s a silly little video about me just drilling a couple holes and then routing an edge for the gasket to fit in but for anyone who’s ever had critical decisions to make about a jumbo reef tank, fellow reef builders understand where we’re coming from. Thankfully that’s behind us now and with the crucial step completed and all the plumbing in hand, nothing is stopping us now from progressing to the next step, plumbing in TWO Vectra L2s and seeing what kind of washing machine we’ve created.

Pisces the all in one 5 gallon nano tank by Aquatop