Apolemichthys guezei, the ‘Bigfoot’ of Rare Fish Photographed in Reunion

Something happened last week in the depths of the Western Indian Ocean, off the remote French outlying territory of the Island of Reunion that rare fish collectors will never forget. Patrick Plantard, a ‘reef guy’ and friend to many of our explorer friends was doing a dive for his trimix deep diving certification when he encountered a veritable ‘bigfoot’ of deep reef diving and captured it in a photograph.

Apolemichthys guezei, also known as the Guezei or Reunion Island angelfish is a fish so rare that despite our best efforts, have never really had a good occasion to write about. This is because the Guezei angelfish was only discovered in the seventies from specimens trapped in gill nets at around 60 to 80 meters deep (197 to 262 feet). 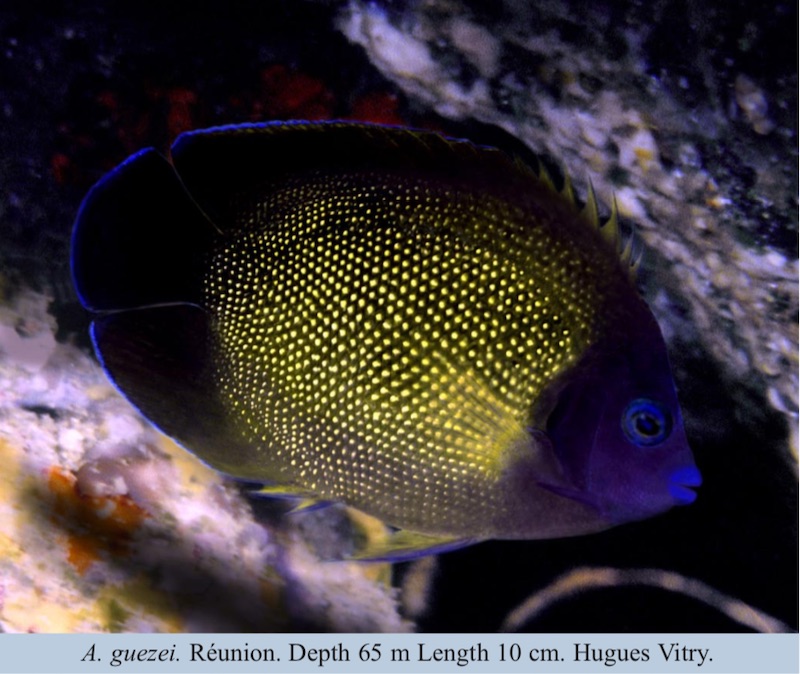 This might not sound very deep compared to other super rare fish that are collected from the mesophotic reefs around the world but keep in mind that Reunion is incredibly remote. Until last week only one other photograph of Apolemichthys guezei was known, taken by Hugues Vitry at 65 meters (~213 feet). Although Patrick Plantard’s photo may not be the first photograph of the Guezei angelfish, it’s the first in 20 years and it shows a pretty different looking fish than Vitry’s photo, although you can see the resemblance.

The discrepancy may be due to the size of the two fish, and the variability that we know exists within the Apolemichthys angelfish, especially the closely related goldflake and cream angelfish. The specimen photographed almost 20 years ago was 10 cm long, or just around four inches long and perhaps still sporting some residual juvenile coloration. Meanwhile, the larger Guezei angelfish that Plantard immortalized last week was 15 cm (~6 inches).

Some similar looking angelfish: the closely related goldflake, griffis hybrid, and the cream angelfish (this one also from the Western Indian Ocean)

This makes the individual that Mr. Plantard around 50% larger and it seems to have lost the blue coloration of the face, but has gained a significant amount of yellow coloration in the anterior part of the body. What is the same about both photographs are the golden yellow spots on the posterior half of the body, the dark unpaired fins and the metallic blue edge to them.

It’s incredibly exciting to be reassured that the Guezei angelfish is a real species, and that its coloration and appearance is pretty much in line with what little we know about this species. Patrick Plantard photographed this Apolemichthys guezei at a depth of 91 meters – just shy of 300 feet, which is also around the depth we expect this fish to be observed.

However it is a real mystery that the late deep diving pioneer Daniel Pelicier never reported seeing this fish in the depths of Mauritius, the only other close speck of land in the entire Western Indian Ocean. Then again, Tim Bennett brought up some spectacular deepwater fish from Mauritius in summer 2018 and he didn’t mention seeing any ‘weird goldflake’ angelfish either.

As an added bonus Patrick Plantard also snapped some photos of two other really nice fish on the way up from his encounter with the bigfoot of angelfish, a juvenile Debelius angelfish and a very nice example of a tiger tail Coral Beauty angelfish. 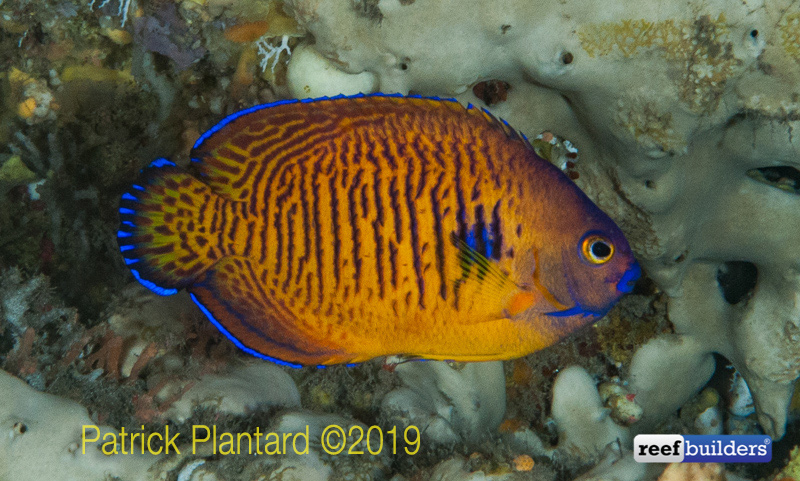 If the Guezei angelfish isn’t found in Mauritius, and collection in Reunion is almost certainly off the table, there’s a very remote possibility that this fish could be found in East Madagascar. Although it sounds very improbable, it’s no more unlikely than discovering the South African ‘endemic’ tiger angelfish or encountering a Debelius angelfish at recreational SCUBA depths, two things which have already happened!

The biggest merci to Patrick Plantard for sharing his very special images with us and helping Reef Builders cap off a prolific decade of reporting the rare fish news with the most memorable story.

Building a Massive Closed Loop for the 400 Gallon Hardline Reef