Some Parasites can Only be Treated With Medicated Food

In the world of saltwater fish and as far as keeping them in reef tanks, a very small handful of disease dominates the collective conversation. The primary piscine ailments that we discuss are really the ones we can see including flukes, Brooklynella, but everyone’s most hated marine fish disease is by far Ich.

It’s for this reason that we have two treatments that practiced regarding fish quarantine and conditioning, these being Praziquantel and copper sulfate. Almost all other diseases are lumped into ‘internal parasites’ because most of us are simply not equipped to take scrapings and examine fecal matter for diagnosis any further than that.

We developed an interest in expanding the scope of our fish handling protocol following the frustrating demise of a prized regal angelfish from Madagascar. This gorgeous specimen initially adapted to aquarium foods very well, fattened up and became very colorful and then after months in captivity began wasting away.

Without a clear or obvious explanation for this loss we decided to look at medicated food options to compliment the spectrum of diseases that are handled by the typical copper and prazi treatment combination. We’ve been using the pre-made Anto-Parasitic Quad Flake by Everything Aquatic for several weeks now with some surprising results, notably the reduction of both an ecto-parasite that was noticeable in the fins of some fish, and Lymphocystis from a Tinker’s butterflyfish.

The medicated flake food made by Everything Aquatic includes Praziquantel, Levamisole, Epsom Salt and Garlic, but the first two ingredients are where most of the anti-parasitic activity comes from. Just as in humans, a medication for internal problems taken orally is much more effective than a topical one and targets the parasites that may not kill your fish, but prevent them from living a long, healthy life. 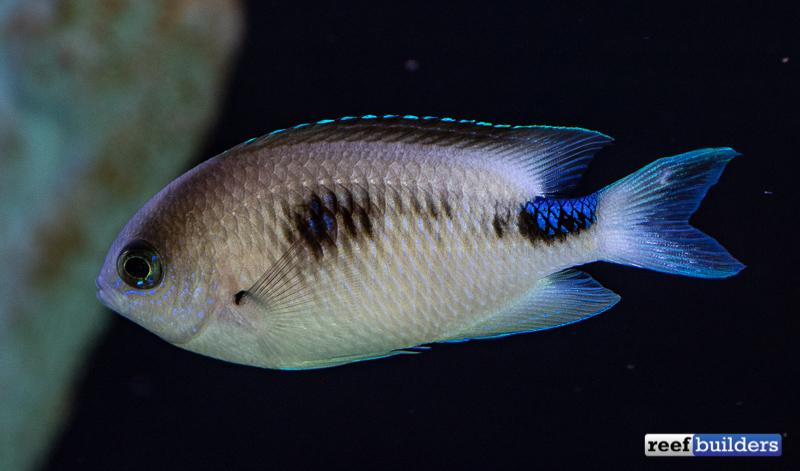 When we began feeding this food we only had a small flare up of an ‘innocuous’ ecto parasite that didn’t seem to harm the fish but did lodge itself in the soft membranes of their fins. After just a couple weeks of feeding there’s only one last remaining trace of this little bug in the caudal fin of a very nice Corazon damselfish who happened to be the last to begin the QuadFlake treatment.

We know that the consensus on Lymphocystis is that there’s no effective treatment, it can come and it can go, but the concurrent feeding of the QuadFlake and the near-elimination of the viral infection from the Tinker’s butterflyfish cannot be ignored. Most likely the effect we have noticed is more from the immune boost than from any direct effect of the meds.

From now on we will be taking a more deliberate approach regarding the use of medicated foods in our long term treatment and conditioning of new fish arriving at the Reef Builders Studio to equally cover both the internal and external parasites they might come with. On a side note, the QuadFlake itself is also a very good food and we’ve got all manner of fish eating it with gusto, the flakes are a little thicker on the crispy side and no doubt the use of garlic is a beneficial ingredient for enticing fish to try it in the first place.