We’ve Never Seen This Uber Rare Angelfish Look Like This!

The black angelfish, Chaetodontoplus niger, is a species so mysterious that it’s hard to know where to begin trying to understand it. First described from the Hongsha Islands in the South China Sea in 1965, the only modern records that this fish exists are the occasional sightings in deep waters of Southern Japan.

While the Japanese Black angelfish specimens may be sighted at around 120 to 150 feet – right at the edge of recreational SCUBA diving, probably due to the colder temperatures, the holotype of Chaetodontoplus niger was collected by trawling at nearly 400 feet deep. These depth and temperature ranges jive with the latest, and most sensational sighting of the Black angelfish to date, made by Patrick Plantard in New Caledonia. 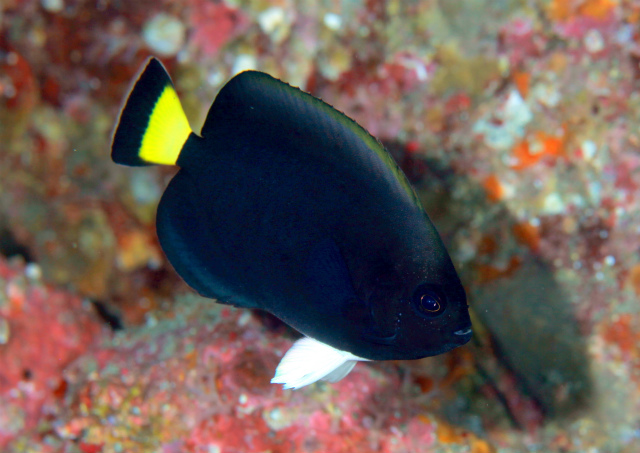 If you don’t know that name, we’ll remind you that Mr. Plantard was the deep diving, rare fish spotting superhero that brought us the first photograph of a live Apolemichthys guezei in nearly two decades. Originally from Reunion, while deep diving the reefs of another French-speaking country Patrick spotted and photographed the largest specimen of C. niger documented to our knowledge.

While all of the other photos and videos of C. niger document mostly all black juveniles, the adult (subadult?) C. niger in this photograph shows a striking yellow dorsal fin, reminiscent of flameback Centropyge pygmy angels. Mr. Plantard informed us that he usually spotted one or two individuals of C. niger such as this one on each of his handful of mesophotic dives in Nouvelle Caledonie, at average depths of around 75 meters, or just shy of 250 feet.

If so this would mean that the depths of the Philippines, Indonesia, Papua New Guinea and the Solomon Islands are hiding these little Pomacanthid treasures but we doubt it because the mesophotic reefs across this range have been explored pretty well by divers and submersibles. Alternatively, this is either a separate, isolated population like we’ve seen with the ‘anti-tropical’ distribution of stripeys, or perhaps a different species altogether, something for the Ichthyologists to sort out. 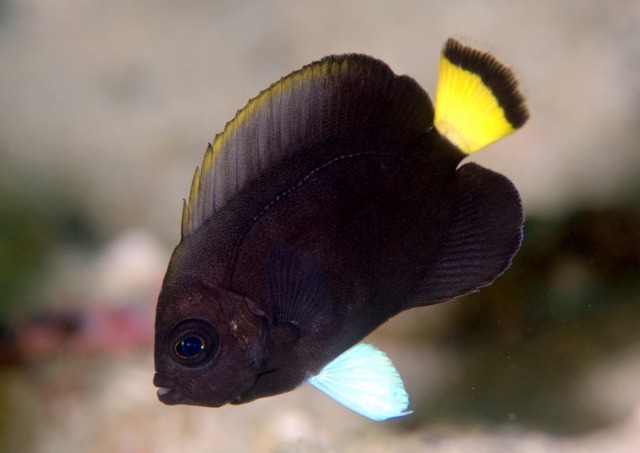 Secondly, if this fish occurs in New Caledonia, as well as our cherished Conspicuous angelfish, there’s the remotest chance that somewhere, at some point, there could exist or have existed a natural hybrid of these two high profile species. The difference in depth where these two fish live could preclude that but we can always hope.

In any case, the surfacing of this new photo of C. niger showing never before seen yellow dorsal on this 10cm specimen is a tantalizing glimpse into what else might be in store for this species, and we can’t thank Patrick Plantard enough for sharing his photo with us.