Is Acropora convexa the Next Holy Grail Acro?

It’s been a while since we wrote about Australian corals but with all this down time, we finally can find the time to write about things that inspired us in our previous journeys.During our Ultra Coral Australia trips on the great barrier reef, we came across several colonies of a weird Acropora colonies with the appearance of a millie, half tenuis, or a very spiny millie, either way a very unusual coral that got our attention.

After a bit of research, we concluded that it is an Acropora convexa, a species accepted by Veron, but not by WORMS (World Register of Marine Species), where it is lumped with A. millepora. After seeing few colonies, A. convexa is obviously different from a millie with widely spaced, not crowded radial corallites but still lined up in neat rows like a Millie. 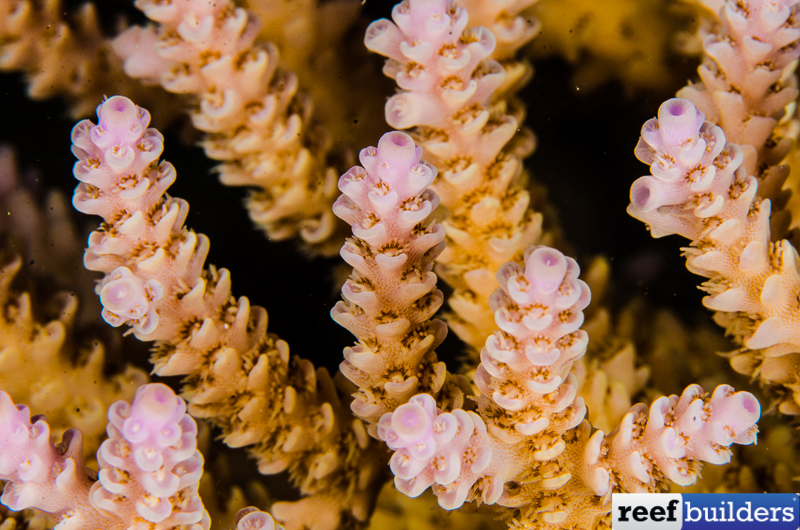 Colonies of Acropora convexa are corymbose pillow shaped cushions, with thin elongate uniform branches. Axial corallites are tubular in shape. Radial corallites are all the same size and evenly to widely space on branches. They are ‘labellate’ or lip shaped, with prominent rounded to flaring lower lips giving a scale-like appearance.

There are no doubt that this species lay down somewhere in the middle of the millepora, tenuis, selago, complex. But it is neither of these.

We found this species in coral reef lagoons inside the Great Barrier Reef, in 10 to 20 meters (30 to 60ft) . Therefore we can infer that A. convexa is adapted to protected turbid water, which is again pretty similar to A. tenuis, and usually the kind of habitat that brings all the crazy corals we love so much.

But the coloration of Acropora convexa is what strike us the most, with some combination of blue/pink, yellow with purple tentacles. Again this color palette reminds us a bit of a Acropora tenuis in that sense and thus a huge potential for a very popular reef aquarium corals.

This particular piece of A. convexa pictured above and imported in Japan by our good friend Sho Nihei, is bright yellow with purple tentacles, again very close to a tenuis coloration. We’re very curious to know what this piece will look like when it will have had some time to achieve its full potential.

The maintenance of the ‘convex’ Acro is pretty similar to any Acropora tenuis: offer it as much blue light as you can give for coloration, and a bit of white daylight spectrum for more growth. Besides that providing Acropora convexa with a moderate to strong flow, will do the trick for this coral from sheltered, inshore reefs. We hope that Nic from Ultr Coral Australia will get us more of this very particular, unique and very high potential coral.