We Made a Hypnotic Spinning Barrel of Macroalgae

Pretty much as long as reef tanks have been around, mini reef keepers have employed algae in its various forms to control and reduce nutrients of the aquarium water. The popularity of using micro or macroalgae for this purpose has waxed and waned over the decades but more recently we’re seeing quite a resurgence of dedicated algae growing chambers, and we’ve recently developed a unique approach to getting the most from an aquarium algae ‘scrubber’. 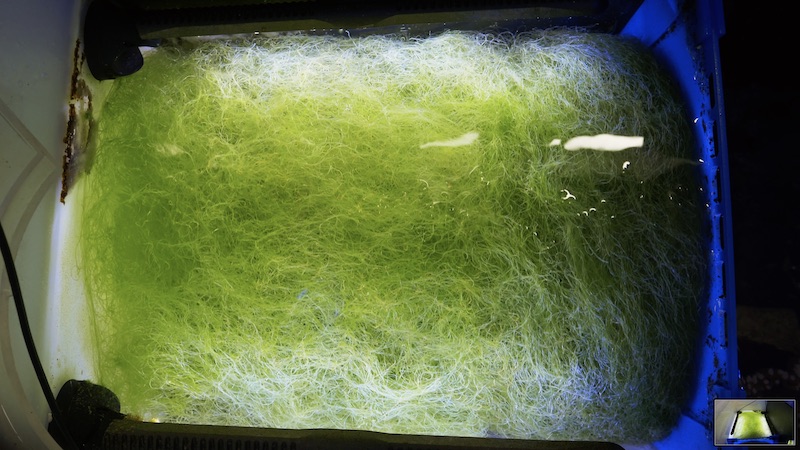 Firstly we’d like to point out that the surge of new reef aquarists have been conflating refugium and algae scrubbers, using them both as if they are interchangeable but they’re not. A refugium should be focused on providing shelter and breeding grounds for small copepods, stomatella, mysis shrimp and amphipods, away from predatory fish. An algae scrubber, especially a macroalgae reactor, can function as a great unintentional refuge for all these critters, but the focus should really be on optimizing algae growth.

With those two points out of the way, we believe that the spinning mass of live Chaetomorpha which has become a nearly solid living cylinder of macroalgae in our main system sump is about as optimized as you can get. We’ve developed a dedicated reaction chamber in this sump using no extra equipment with a number of benefits that helps this barrel of algae grow very fast, and very dense.

We estimate that there’s an actual 1,500 gallons per hour passing through this chamber and the row of holes feeding this section of the sump creates a very strong rotating water movement. The spinning motion of the live dense algae generates very strong water flow around and throughout the living algae filter, and it has the added benefit of exposing all sides of the Chaetomorpha to the bright Tunze LED striplights. 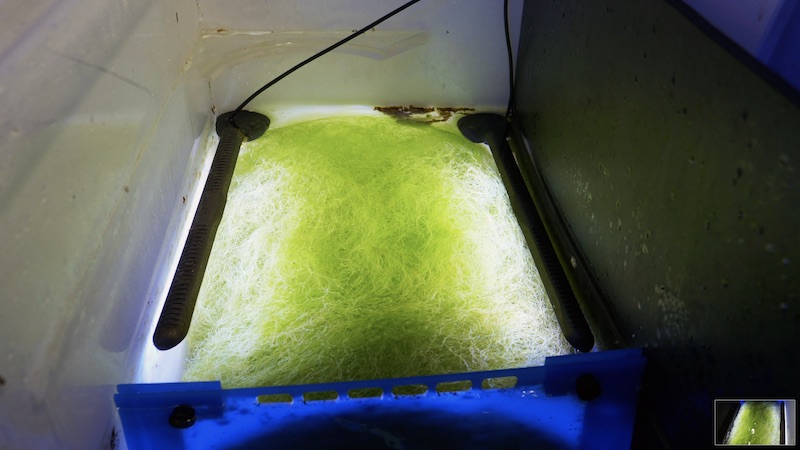 Speaking of which, we are extremely fond of the diffused, submersible form factor of the Tunze LEDs and it just so happens that these lights run almost twice as bright when submerged than emersed. We know that we *could* get even more growth and photosynthesis if we used Tunze’s dedicated horticultural spectrum of these lights, but we like to see our healthy algae glowing green, not a scientific pink or purple.

In this configuration the algae barrel grows extremely dense, functioning both as a very effective nutrient and carbon dioxide remover, but also an excellent form of phytoremediation. Every time we harvest this algae we are also permanently removing a vast array of unwanted heavy metals and other pollutants that can build up in some marine aquarium systems over a very long period of time. 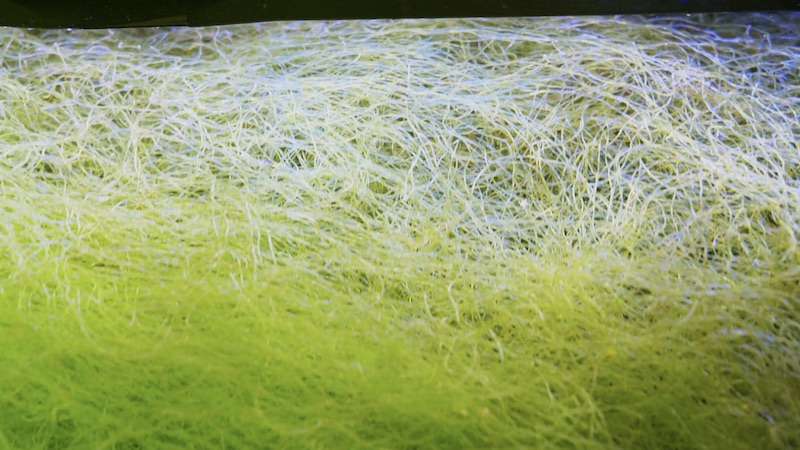 Not only does this dedicated spinning chamber grow the bejeezus out of Chaetomorpha but the algae is accessible and can be directly harvested without any reactor to open up or maintain. Surprisingly the Tunze LED strips grow almost no algae on their surfaces perhaps due to being completely outcompeted by the giant ball of algae.

Aside from that, the spinning barrel of algae is extremely photogenic and totally hypnotic to watch in motion. We’ve piqued a lot of interest with this particular approach of concentrated Chaetomorpha culture so we’ll be sure to do some follow ups to explain and describe more about how this algae chamber behaves and performs over time.

Neon Yellow Elegance Coral is like a Sunset at Chernobyl