Neon Yellow Elegance Coral is like a Sunset at Chernobyl

Think of LPS corals with variation in color and you might think of torch corals or chalice, but the humble Elegance Coral, Catalaphyllia jardinei, can produce some freakish variations too. Most C.jardinei have light brown base flesh, fluorescent green mottling on the oral disc, with mint green hues and blueish tips.

Occasionally you get some which are more lime green in color but still with the mottled pattern, some with rare red coloration under the mottling, or even very dark, almost black specimens with yellow or orange tips. 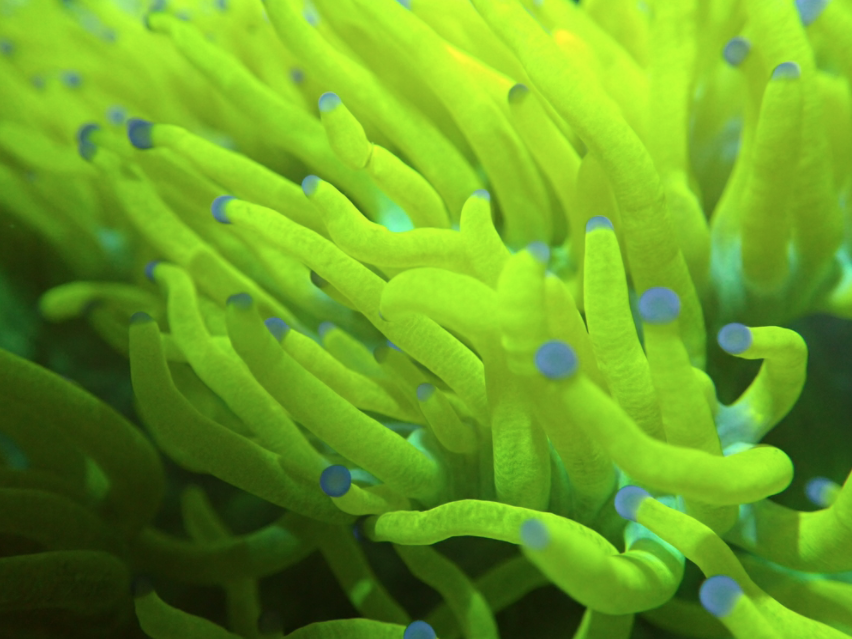 But very rarely some colonies of elegance go beyond lime green and instead glow a freaky neon yellow. Some even have a bright yellow fringe on a lime green body with yellow tips, and the so-called ‘Chernobyl Sunrise’ Elegance Coral has fluorescent yellow flesh across the whole base including the oral disk and tendrils, and tops off the look with bright blue tentacle tips.

It’s a showcase coral that will grab your attention, become a trophy for the few who can afford it, and leave the resting of us drooling into our auto top-offs.

Place it under royal blue LEDs and it glows green/yellow like it has its own power source. But flick your lights to their white settings and Chernobyl turns into the prettiest pastel yellow, with violet and pink hues to the blue tips. This solid yellow “cat” is a rare find indeed.

We first saw one of these corals in a retail store in Holland some three years ago. That one was yellow with pink tips. Since then a handful has appeared at British wholesaler PM Aquatic Imports and has filtered through into select retail stores. We spotted one in Burscough Aquatics – a retail store in the North West of England most recently.

All these special cats have been large at 12” when fully extended, but two solid yellow specimens had 18” long skeletons when retracted, with literally dozens of mouths spaced out along the winding base. No two have been the same in pattern or color, and the pictures show the subtle differences in the four or more Chernobyls that have been available and photographed so far.

With prices ranging from £1300-2000 ($1600-2500), this is one price-prohibitive coral but PM took to the Gryphon saw regardless and actually propagated one specimen, with the resultant frags healing and sealing-up into small, complete cats again within a few weeks.

With the most toxic of toxic green colors and the most radioactive yellow-colored coral he had seen, PM manager Thomas Burney christened it the “Chernobyl Sunrise” after the Chernobyl tv mini-series he was watching at the time, and the name stuck.

Catalaphyllia corals span a large collection area in the wild, from Australia in the South to Fiji in the East, up to Indonesia, the Philippines, Malaysia, and Cambodia.

Other lime green specimens are rumored to be on their way but WhatsApp pics have revealed that although nice, they aren’t in the same league as the Chernobyls pictured, or quite worthy of the radioactive moniker.

Elegance corals are sand-dwelling and inhabit shallow coastal waters in nature. Touch one and you can actually feel the nematocysts stick the polyp’s tendrils to your skin, although the effects are minor.

We Made a Hypnotic Spinning Barrel of Macroalgae