Prolific Ph.D. candidate Lemon Tyk, Brian D. Green, and colleagues have published papers on not just two but four new species of Pencil wrasse this week. Pseudojuloides crux and P.paradiseus are now being joined by P. pluto and P. proserpina, bringing the total number of Pencil Wrasse species to 18.

The latter two species descriptions came about after reports of the Polynesian wrasse, Pseudojuloides atavai, being seen outside of its usual region in French Polynesia and the surrounding islands. Co-author Brian D. Green told Reefbuilders the work actually goes back 17 years with most of the types collected by 2005, but they were not able to collect tissue samples of P. pluto until last year, so full systematic work couldn’t be done until now to ascertain if P. atavai was a single widespread species or if those with male color differences from northwest Micronesia were actually new.

Morphological and molecular studies on the different populations of P. atavai were carried out, and the two new species are the result of that study. 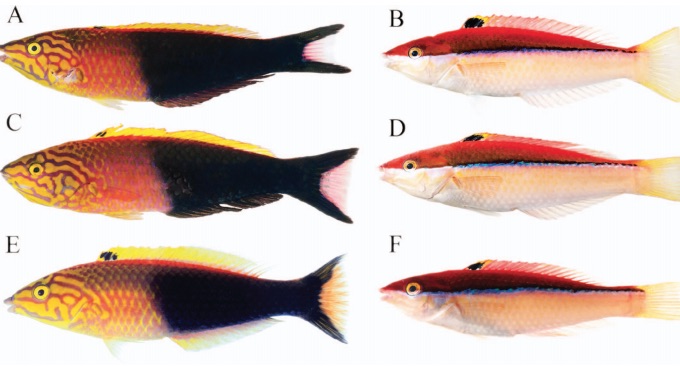 Pseudojuloides pluto comes from patch reefs over a sand/rubble bottom in Wake Island, and the Northern Mariana Islands, Northwest Micronesia. It differs from its congeners in having a deeper body in relation to its length, with males olive green dorsally, fading to whitish green ventrally, although this is usually obscured by black in terminal males.

Females look very similar to Pseudojuloides atavai (hence the confusion,) with a pinkish-red stripe from the mouth to the top of the base of the tail. Specimens were also smaller than P. atavai with the male P. pluto holotype being 78mm in length, versus 121mm for the male P. atavai specimens in the study.

It’s named after Pluto, god, and king of the underworld in Roman mythology, in reference to the nefarious and sinister appearance of the males. The contrasting beauty of the females is reminiscent of Narcissus flowers according to the authors, a sacred symbol of Pluto that grew along the River Styx at the boundary of the underworld.

The Pomegranate pencil wrasse was found over a rubble terrace adjacent to a drop-off on the northwest face of Fatu Hiva, Marquesas, French Polynesia. It’s been described only from the 91mm long male holotype, with female coloration in life unknown, according to the paper. But with P.atavai now thought to be a species complex, female coloration may well be similar to that of P.atavai and P.pluto. Males have a reticulate head pattern, jet black body with a wide pink band across the breast, and a bright yellow dorsal fin.

It’s named after Proserpina, the goddess and queen of the underworld in Roman mythology, in reference to both its haunting coloration and close relationship to P. pluto. The honeycomb pattern behind the pectoral fin bears a resemblance to the seed-studded interior of the pomegranate fruit, a sacred symbol that features prominently in the myth of Proserpina and her abduction by Pluto into the underworld. Fitting features, and a clever nomenclature tie-in of the two new species.

It shares its distribution with the endemic P. pyrius and given the high levels of endemism in the Marquesas, it is likely that P. proserpina is also endemic to the region. Its only been observed once at a depth of 25 meters and is assumed to inhabit depths over 30m, deeper than both P.atavai and P.pluto are found at. The depth and lack of exploration of mesophotic Marquesan reefs could also explain its rarity.

The Polynesian Wrasse, Narcissus Wrasse, and Pomegranate Wrasse are three stunning species of Pencil Wrasse that will no doubt send wrasse-collecting reefer’s pulses racing, especially the coloration and pattern of the three-terminal males.

We were lucky to see a trio of Polynesian wrasses at Atlantis Aquarium in Germany in 2014, with the original write-up done by none other than the co-author of the paper on the two new species, Lemon Tyk. It’s safe to say that video footage left a lasting impression.

Moving New Fish to Displays After a Thorough Quarantine