Over the years the reef aquarium hobby has become increasingly analytical about many aspects of our reef tanks. We measure light levels using micromols of photosynthetically active radiation, send off water samples for ultra precise chemistry measurements using ICP testing services, and most of us use high purity additives approaching pharmaceutical grade.

Despite all these advancements in our increasingly scientific and precision approach to reef aquariums, one key factor which we feel is sorely lacking is knowing the actual volume of our reef aquarium systems. A typical 180 gallon aquarium is 72 x 24 x 24 inches in dimension, making it 41,472 cubic inches, which actually works out to 179.5 gallons.

However these are the external dimensions, so if we subtract a half inch for the thickness of the glass, we get 37,559 cubic inches, or 162.5 gallons – your one eighty actually holds closer to 160 gallons of water, but that’s IF you fill it to the very top! Subtract another 1.5 inches and now we arrive at 152 gallons, that’s 15% of the water volume less than the nominal tank volume rating, and we haven’t even accounted for internal or external overflows, displacement by all your rock, sand, corals, and yes – even the fish displace water too.

Add some volume for your sump and pipework, water in the skimmer and reactors, then remove some volume for the pumps, heater and biomedia, and now you are left with a situation that most reefers are in, simply not really knowing the actual volume of water within their aquarium displays and systems. How can we even aspire to do anything close to chemically precise in our aquariums if we don’t even know how much water we’re working with?

As you know we’ve been building up an all-new Australian LPS aquarium using the Cade Pro Reef S2 900, and are just at the point where all the rock and equipment is inside and ready to be salted up. This tank is described as having a total system volume of 104.9 gallons but if you don’t look closely at the spec sheet you’ll miss the part about the built-n ATO reservoir containing 6.3 gallons bringing the actual working volume to 98.6 gallons, but again only when it’s filled to the very brim.

We have long since wondered how we could accurately calculate the actual volume of water of our aquariums after they are totally set up and populated. There’s probably a way to add a very precise measure of some trace element like strontium and test the water using ICP to calculate the volume based on the rise in concentration, but in the meantime we have devised a simple method to answer this question in a new aquarium that doesn’t yet have any livestock inside of it.

With our tank ProReef S2 900 completely aquascaped, all equipment in place and running filled with freshwater, we decided to use the five gallon pre-measured bags of Two Little Fishies AccuraSea 1 salt mix to calculate water volume using chemistry, and math. In our case it was important to specifically use these pouches of pre-measured salt which we know to be 618 grams when it is packaged in a dry environment, because over time moisture can and does seep through the bag. You could also replicate this method if you have a precise scale and access to super dry salt, like from an unopened bucket, but you’ll also need an accurate, freshly calibrated conductivity meter to take your measurements. 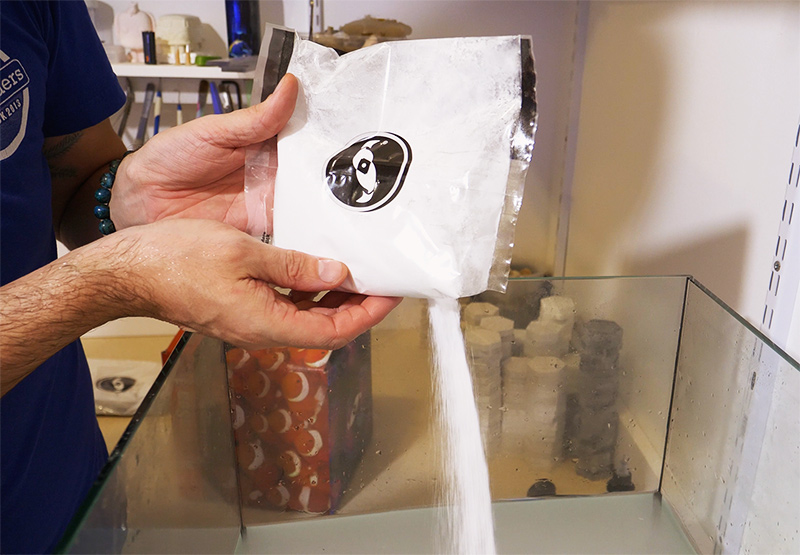 For our experiment we used the Hanna Salinity Tester, freshly calibrated, and began by measuring the salinity (conductivity) of the freshwater in the tank which came out to 0.2 parts per thousand since the water and Marco Rocks added some initial dissolved solids to the water. We added one, five-gallon pouch of AccuraSea 1 and let it dissolve completely for about 30 minutes at which point we measured a salinity of 2.1 ppt. 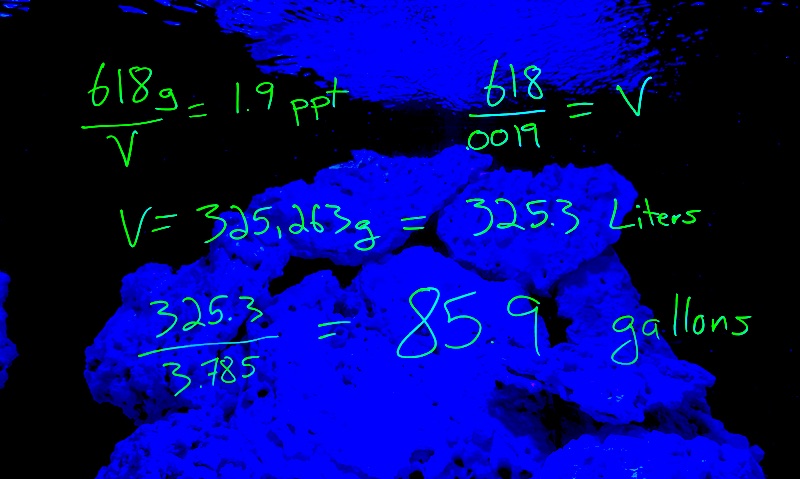 We repeated this process two more times, adding packets of pre-measured AccuraSea 1 salt and measuring the subsequent rise in salinity and calculated 88 and 89 gallons, but we know there’s a small degree of inaccuracy in our calculation which doesn’t take into account the mass of salt already in the water. Nevertheless, this is a much smaller degree of uncertainty than we started with, and we now know with a great deal of confidence that our tank currently holds between 86 and 88 gallons of water, accounting for the tank, sump, pipes, rock work, displacement, everything.

As we add corals and fish, more and more water will become displaced over time, but we’re glad we arrived at a precise measure now because we won’t be repeating this salinity measurement method once the tanks are filled with delicate livestock. We believe there is a method for a precise dose of a trace element and a pair of ICP tests to help arrive at similar, calculated volume in established reef tanks because of all the things that should be easy to know about our reef tanks, the actual water volume should be one of them.

The CoreXC & CoreXP Are All New Slim Fixtures from HM Electronics