Two new species of reef just got their official descriptions inaugurating them into the annals of reef fish taxonomy. Like so many recent damselfish, Pomacentrus andamanensis was split off from a common and widespread species, the ambon damselfish, while the whiteline dwarfgoby Eviota angustifascia is described from specimens newly recognized from Fiji and New Guinea.

The andaman damselfish joins a long list of tropical reef fish from the Andaman Sea, which is a region in the eastern Indian Ocean that is almost totally separated from the species-rich Indo-Pacific region by Thailand, Malaysia and parts of Indonesia. Pomacentrus andamanesis is most closely related to the ambon damselfish, both of which have a prominent ocellus in the soft portions of the dorsal fin but whereas this spot shrinks and disappears with maturity in P. amboinensis, it remains throughout all life stages of the newly described P. andamanensis. 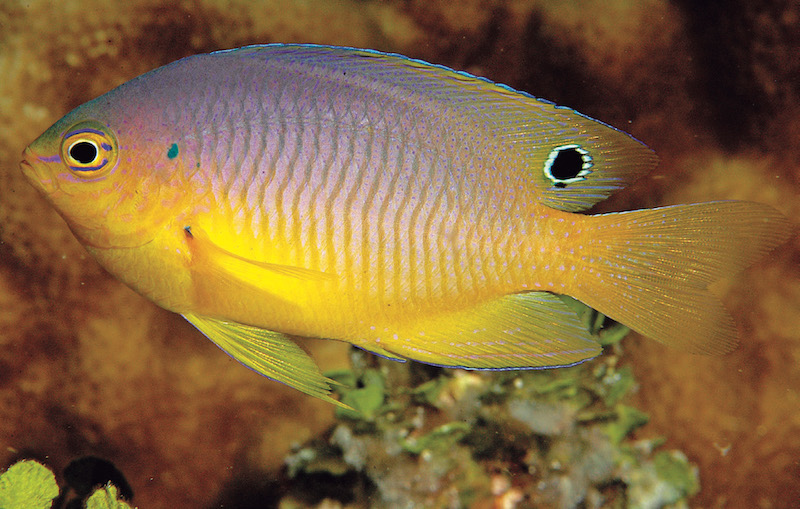 The white line dwarfgoby joins the more than 120 species of Eviota that are found throughout the Indo-Pacific Oceans but differs from most species in the genus by lacking the ‘cephalic sensory-canal pores’ used to distinguish many of the species. This newly identified Eviota angustifascia is described on the basis of type specimens collected deep waters of Fiji, Indonesia, and Papua New Guinea with the 50-60 meter, 164 to 196 foot depth no doubt contributing to the species elusiveness until now.