Chaetomorpha Strains are Much More Different Than We Ever Knew

Chaetomorpha is a genus of macro algae that almost every modern reefer will be familiar with, but there’s still a lot we don’t know about the thin wiry green algae. Whether you call it ‘chee-to’, ‘chay-to’ or the more universally accepted pronunciation of key-to-morfa, there’s no question that Chaetomorpha has shaped the way we look at macroalgae scrubbers and nutrient export for our reef and saltwater aquarium systems.

Over the past few years we’ve relied heavily on dense Chaetomorpha growth to help bolster our pH by absorbing excess carbon dioxide from the system, culminating in huge spinning barrels of live Chaeto that would make any algae farmer proud. In the quest to chase ever higher pH we were undertaking some, let’s go ahead and call them ‘experiments’, and inadvertently killed off our standing crop of the green stringy stuff. 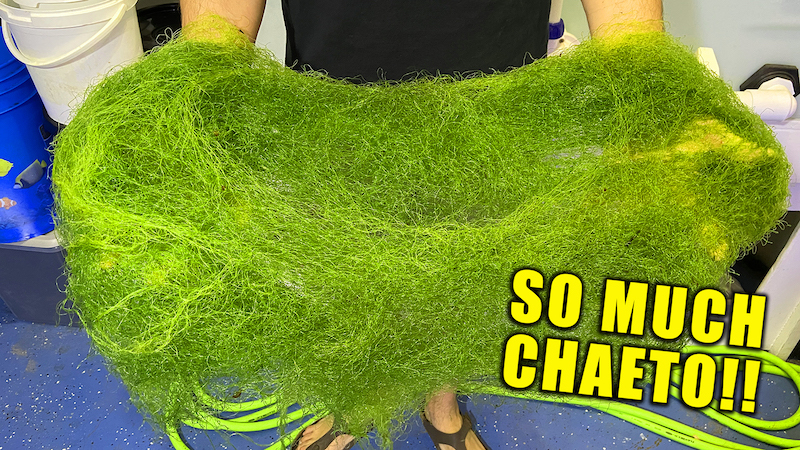 We thought it really wouldn’t be a big deal to simply get some more of the ubiquitous Chaetomorpha from our local fish stores but once when we did, it started us down a rabbit hole culminating in a deep dive into the different strains of Chaeto. To our surprise, the replacement Chaeto that we got didn’t hit the ground running and it even seemed to be growing in a very different way from the stuff we had before.

At first it was a just a hunch that the replacement Chaeto was really different but this hypothesis was confirmed when we got our hands on the strain we originally grew. We’ve since set up separate growing chambers for each strain of the Chaetomorpha and both their growth rate and growth form are way more different than we could have ever imagined. To our surprise there hasn’t been much of a real deep discussion on the different Chaetomorpha strains yet so we’ve put together a primer on what we’re calling the ‘Fine’ and ‘Brillo’ forms of this workhorse macroalgae.

We don’t know wether they are distinct species or just different varieties of the same species but we have to describe them somehow so the thicker variety we are calling ‘Brillo’. This strain grows into thick strands and tends to curve in on itself, twisting and turning most similarly to the widely known Brillo pads. We determined that this strain is very different in its growth when it really didn’t react well to the bright lights of our established Chaetomorpha reactor.

Under brighter lighting the Brillo variety stagnated, grew more towards the shaded center, and generally didn’t thrive despite very vigorous water motion and copious light. But once we moved the Brillo Chaeto into reduced lighting and the same water flow it rebounded and grew into the dense ball of intertwined algae strands that most people are familiar with.

As the name implies, the Fine variety of Chaetomorpha grows into much thinner strands but it also doesn’t spiral nearly as much. The more supple strands of Chaeto var. Fine will grow generally straight out from the center of the algae mass but are perfect for a spinning reactor setup wherein the strands become wrapped around the algae ‘colony’ becoming denser like wrapping spaghetti around a fork.

The Chaeto var. Fine seems much more suitable for culture in a higher light environment because since we got some replacement and placed it back into our high light Chaeto reaction chamber, it has ‘behaved’ the way that we are used to. So now we have two varieties of Chaetomorpha growing side by side in what is perhaps the world’s first dual Chaeto macroalgae scrubber in a reef aquarium environment.

By growing these two different varieties of Chaeto side by side we can come to some tangible conclusions about these different strains, and boy are they different. The Chaeto Fine var. grows much faster, can handle a lot more light, and is much more suitable for use in a ‘dynamic’ macroalgae reactor, especially one with a lot of room for the algae to grow. The Brillo variety of Chaeto grows much more slowly but also more densely, however it really doesn’t like bright light – this makes the Brillo variety much more suitable for smaller macro algae scrubbers squeezed into small chambers of nano sumps, or setups with dimmer light and or lower nutrient export requirements.

There are over 70 species of Chaetomorpha many of which are highly recognizable and we don’t know if we are describing two different species, or two different varieties of the same species. But what we do know for certain is that the algaes have very different and recognizable appearances, very distinctive growing behavior, and react very differently to lighting intensities of varying degree.

With so many more reefers using Chaetomorpha in macroalgae scrubbers and reactors in recent years it’s really surprising that the topic of different Chaetomorpha hasn’t been more widely discussed. These two Fine and Brillo varieties are not likely to be the only distinct strains of Chaetomorpha in the aquarium hobby but knowing how they are different and distinctive will only better help us understand how to use them in our aquariums.