Evan Montgomery has been reefing for quite a while and during his time assisting at the Reef Builders Studio he’s sharpened his reef building skills even more. We’ve featured Mr.Montgomery’s reef tank a couple times over the years but this latest installment is certainly a new zenith of lush coral growth and vitality.

What we and many viewers will really love about his aquascape is the large grown out colonies that juxtapose a great variety of shapes and colors and it really looks like a slice of a natural coral reef. This isn’t your average ‘fruit stand’ collection of retina-burning fluorescent colors but instead is dominated mostly by roughly ten very large and mature coral colonies. 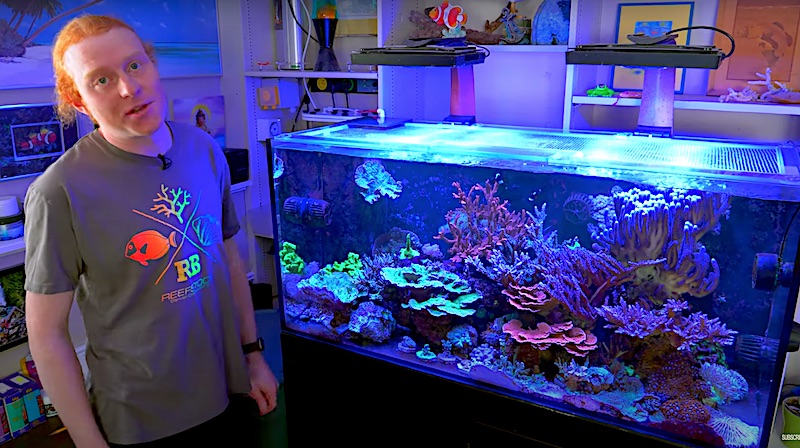 We’ve seen plenty of large Acropora corals grown out in reef tanks but we’re particularly enamored with the four different classic Montipora strains growing into full bloom in a tank just four feet long. Between the orange and Leng Sy Caps, the large Montipora hispida, M. stellata and sizable orange M. digitata Evan’s got all of the greatest Montipora hits of this important group of SPS corals.

It’s no coincidence that we – Evan and I – did a serious job of bush-wacking nearly all of the monties and especially that overgrown ‘Hill’ of purple Milka Stylo that we wrote about last week. Luckily for us nearly all of the showy colonies ended up at the Reef Builders Studio so that we can grow them out even more where we hope to showcase them again in future videos. It’s been a minute since our video stream showcased a really dope reef tank so we hope you like this feature and we’ll be working diligently to bring you some more.

See also  How to Hide Your Water Flow Pumps