The Marineland Exhibit Series Wifi Aquarium is one of the newest all in one fish tanks from one of the hobby’s oldest companies. First announced in January of last year, due to the lockdowns we just enjoyed our first look at this intriguing assortment of aquarium gear at Reefapalooza Orlando last weekend.

The hallmark feature of the Marineland Exhibit Series Wifi Aquariums is its wirelessly controlled LED light strips marking Marineland’s first foray into app controlled and connected aquarium gear. This new generation of all in one comes in three modest sizes including a 20 gallon and 29 gallon in classic display orientation, but the more compelling offering is probably the 25 gallon Marineland Exhibit peninsula aquarium.

All of the Marineland Exhibit Series Wifi Aquariums come with a programmable LED light with three channel color control of red, blue and white diodes but the 25 gallon Peninsula has a flat striplight with roughly twice as many LEDs as the others, making this model a much more suitable choice for reef aquarium applications. One refreshing aspect of the Marineland Exhibit Series Wifi Aquarium is that the rear mounted filtration chamber is significantly larger than other All in Ones to accomodate a number of included accessories such as a heater, Rite Size cartridge, media basket, a bio-wheel and the return water pump.

This larger filtration really is quite a bit larger than we’re used to which should make servicing and cleaning helluva lot easier, and it will enable much more flexibility in terms of DIY projects and adding small reactors or protein skimmers when used as a saltwater aquarium. One thing you won’t find is an included auto top off which is negated by the inclusion of a tight fitting glass lid which will reduce evaporation, and it neatly sides backwards to permit access to the main aquarium display for feeding or maintenance which we find to be a clever design.

All models of the Marineland Exhibit Series Wifi Aquarium include mitered corners for an ultra modern look although it doesn’t use high clarity glass, which should offer some scratch resistance for the aggressive glass cleaning aquarists. Prices range from $500 to $600 depending on the model and your local market which also comes with your choice of a black or wood grain finished stand.

It may not be particularly flashy compared to other aquariums but LEDs have gotten good enough for a nice entry level reef tank and the larger filtration chamber will certainly appeal to the tinkerers who like to ‘kit up’ their small and nano tanks with a bevy of devices and accessories. You could make the case that Marineland was one of the very first players in the All in One aquarium market with their small Eclipse tanks from the late nineties and early 2000s and the new Marineland Exhibit Series Wifi Aquarium might just put them back on the map. [Marineland] 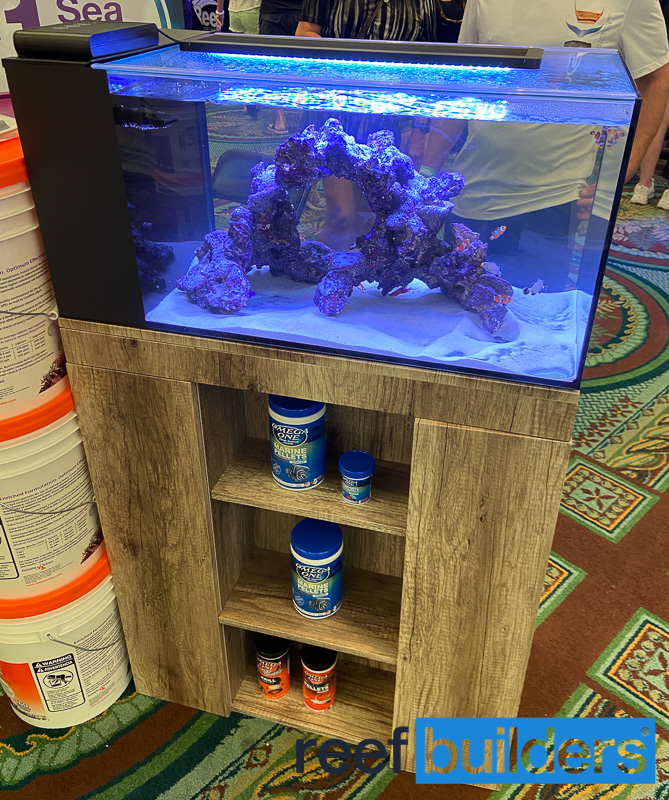 May 19, 2021
Site Sponsors
Reef Builders is Supported by: