As huge as the reef aquarium hobby has become around the world and especially in the U.S., we find it simply astounding how collectively ignorant reefers are of corals that live right off of our shores. Caribbean stony corals consist of around 70 different species which are mostly very unique with few analogues in the Pacific or Indian Ocean and a range of colors and patterns that any modern reefers would appreciate.

Unfortunately, the collection of any Scleractinia in the tropical Atlantic has been totally off limits for most of the history of modern reef aquarium keeping and the hobby is practically unaware of the diversity of growth forms and fluorescent colors of corals living in Florida, Texas, and throughout the Caribbean Sea. As the hobby has grown in popularity throughout the world, Central and South American reefers have turned some of their attention to the corals living off their shores and one company in Colombia is showing the beauty of these corals under modern reef aquarium lighting.

We’re unsure if it’s actually legal, but Mundo Natural Medellin has been harvesting a range of unique Caribbean stony corals from their nearby reefs and showing off their distinctive beauty on their Instagram page. Surely most reefers are aware of the Staghorn and Elkhorn corals of the Caribbean, Acropora cervicornis and A. palmata, but they are probably less familiar with the interesting SPS and LPS corals with their own textures, colors, patterns and tissue.

Agaricia are encrusting and semi branching coral species that are reminiscent of Leptoseris, many of these occur in muted jade colors but also can be found with bright orange mouths and rims, golden striations or bright white mouths on a black background. One of our favorite large polyp species is Mycetophyllia which appears to be a visual cross of Echinophyllia chalices and ‘Symphyllia’ open brain corals with crazy looking beaded tissues and really striking patterns of spots and stripes. 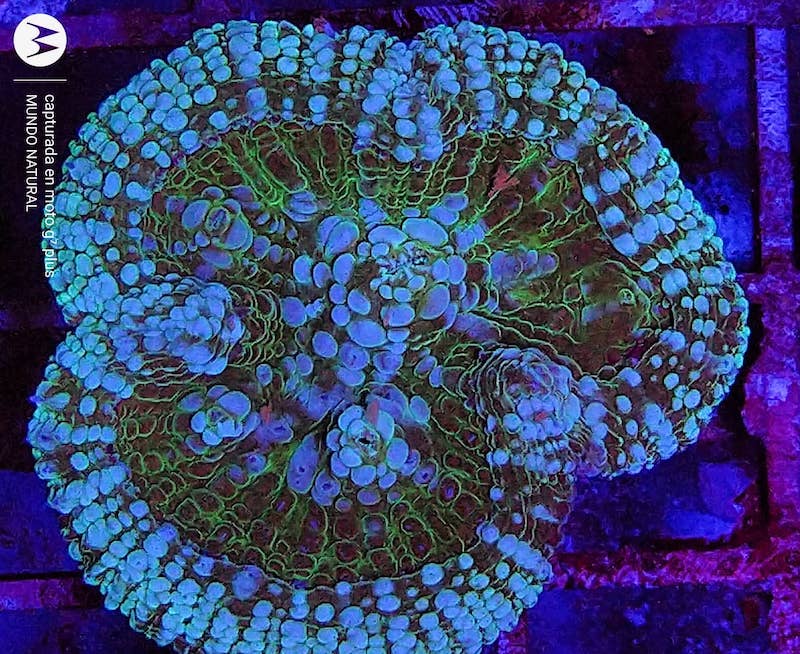 The more familiar looking LPS corals include Isophyllia and Isophyllastrea which are very similar to the Lobophyllia species which were formerly classified as Symphyllia and while most of these are dull greys, browns and green, the occasional specimen is actually bright with stripes or splashes of neon green. Other interesting species include Colpophyllia, Manicina, and Diploria which are all distinct but have a growth form of meandering valleys and ridges of different sizes and proportions.

The last major group of Caribbean stony corals are the solitary corallites of Scolymia cubensis which mirrors the basic red or green colors of the Australian ‘Scolies’ with the occasional specimen being found with splattered or striped patterns, but so far nothing on the order of the retina searing UFO, warpaints, bleeding apples or master Scolies from Australia. Scolymia cubensis can actually occur in large numbers in certain habitats, usually on outer reef walls and under ledges as they prefer clean water with reduced lighting. 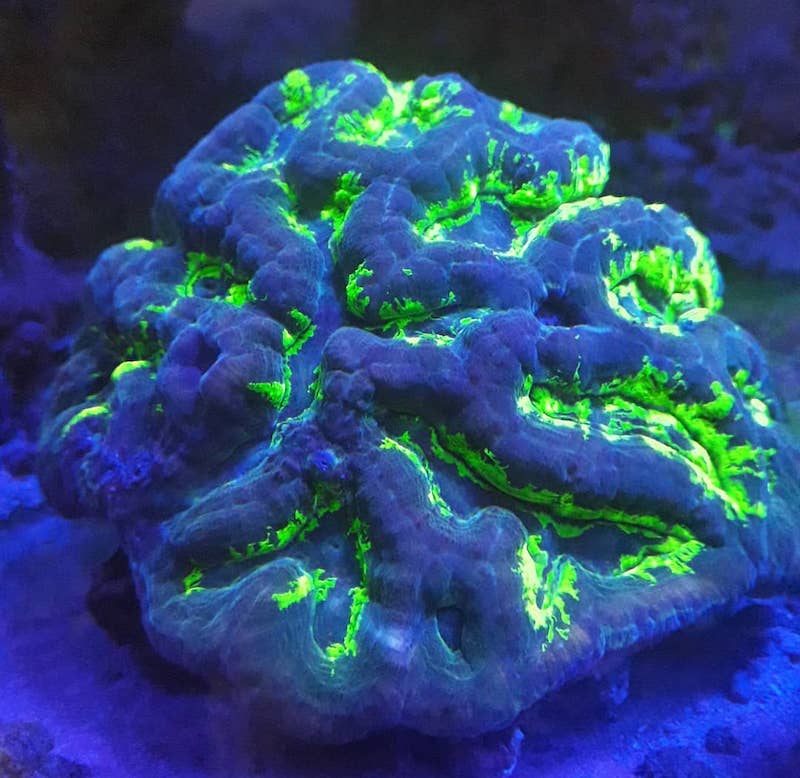 It’s completely understandable that there are no legally collected stony corals throughout the range of Caribbean corals, and we want to remind everyone that their collection is strictly forbidden in most Caribbean and American countries. However the side effect of this ban has been that there is no living ark of these species in the reef aquarium hobby, and therefore much less emotional attachment to the declining conditions in Florida and elsewhere.

There is a kind of cognitive dissonance of attending a reef aquarium coral market in a place like Florida with thousands of colonies and frags of corals from the other side of the world, but not a single example of the coral diversity living just off shore. For years we’ve felt that there’s got to be some middle ground between protecting the Caribbean reefs from over collection, and these corals having basically zero presence in the reef aquarium world – perhaps one day we reefers can help to refine special techniques for Caribbean corals and help preserve them through our reef tanks, but for now you basically have to go diving to see them or if you’re lucky, some public aquariums have a small selection of these native coral treasures.

Next Gen Lani LED resurfaces with an Unrealistic Price Tag

The Transformation of the Shining Dragon Acropora

May 31, 2021
Site Sponsors
Reef Builders is Supported by: